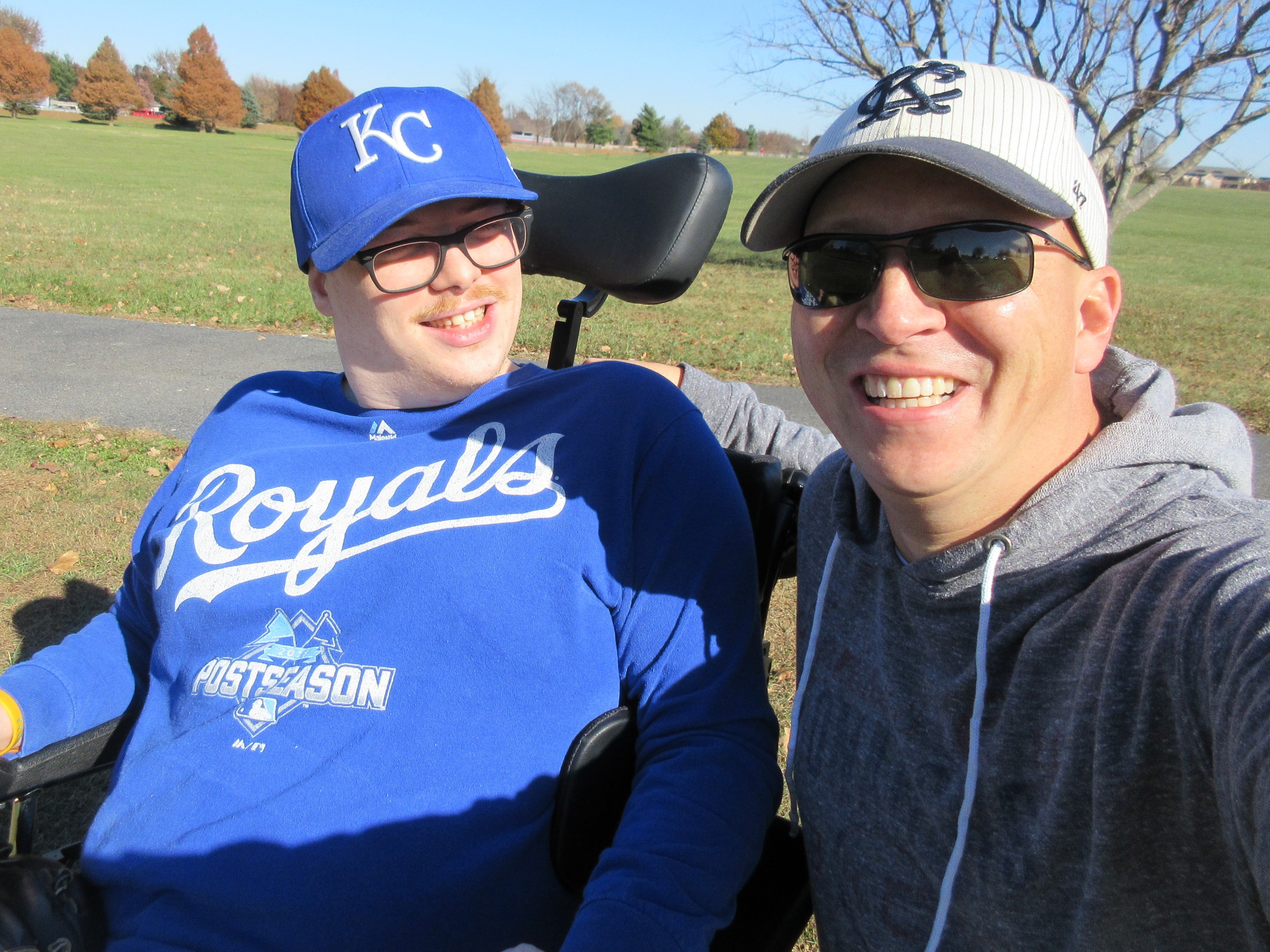 Nic’s fastball had more movement than I expected. I ended up dropping it a couple of times. He just smiled and kept on throwing. Nic had warned me ahead of time about his incredible pitching arm and that I needed to watch out for his fastball in particular. Eventually, I got the hang of it and we worked into a sweet catch-playing groove while talking about our favorite Royals player — Alex Gordon.

Uncle Bob, also a Royals fan, gets some of the credit for introducing Nic to Alex Gordon as he used to sit next to Nic and sort through stacks of baseball cards, telling him stories of the various ballplayers. A good stack of baseball cards is not only great for the imagination, but a wonderful prompt for stories of baseball past and present. Uncle Bob and Aunt Deana make sure Nic has a healthy supply of Royals shirts.

It isn’t easy being a Royals fan in Cardinals country, especially if one of your friends helped the Cardinals win a World Series — tip of the hat to Josh Kinney and 2006. Nic told me he is a true-blue Royals fan and gives Josh a hard time. For today’s game of catch, Nic even wore a brand-new Royals hat.

He surprised me when he mentioned being an Elvis fan — Love Me Tender is his favorite song, followed by Hound Dog, and Blue Suede Shoes. I need to introduce Nic to Rick (Day #318), the only other Royals and Elvis fan I know.

He left his powered wheelchair at home today, the one with the baseball for a joystick and the horn, and came in his manual wheelchair which is powered by mom’s muscles and sense of humor.

Nic is diagnosed with PMD — Pelizaeus-Merzbacher Disease — which is an extremely rare genetic disease that affects the myelin covering the nerves in the brain. There are less than 1500 cases of PMD in the world.

But PMD doesn’t keep Nic from living fully and laughing. Of course he laughs; his birthday is April Fools’ Day.

He has a girlfriend, Jennifer, and a good friend J.R. from Maryland who also has PMD. He loves playing ball at the Miracle League field with friends Brian and Rachele (Day #306) and he is convinced Uncle Bob constructed the field just for him. (Side note: Uncle Bob is the Director of the Parks & Recreation Department for the City of Springfield.)

Nic is also full of hope and talks of the day when he gets to heaven.

“I’ll walk and my first dance will be with Jennifer. I will play baseball and basketball and go fishing with my great-grandpa.”

Today’s game of catch was everything catch should be: full of high-fives and fastballs and the joy found in making a new friend.