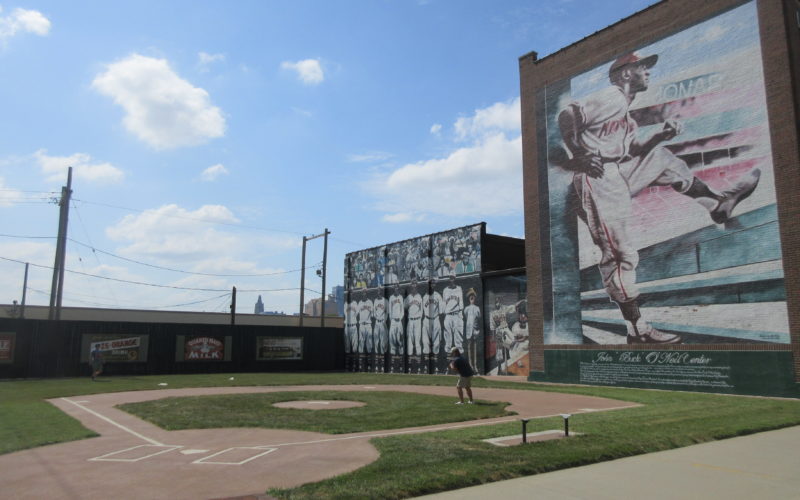 Aaron and Josh joined me on the day-trip visit to the Negro Leagues Baseball Museum in Kansas City, Missouri. I’ve been to the museum more times than I can count and always find the experience thought-provoking.

Yesterday was no different, though there are a couple of changes due to Covid-19. Patrons of the museum need to make reservations to enter the building and can visit the facility either from 10 – 1 or 2 – 5. The James Earl Jones narrated video currently isn’t playing, which is sad, but understandable. A couple of the interactive displays have also been temporarily removed.

I saw several of my favorite things — paintings from Kadir Nelson — I would love the opportunity to play catch with Kadir! — and all of the phenomenal statues and the gloves that look like art. And I noticed some things which had always been there, but resonated with me more on this trip.

Like Branch Rickey’s quote, “I couldn’t face my God any longer knowing that his black children were held separate and distinct from his white children in a game that has given me all I own.” Branch said this in reference to his decision to sign Jackie Robinson, and it echoes from coast-to-coast today.

I remembered a roundtable interview Doug Glanville conducted earlier this summer with several former MLB players, including Missouri State alumnus Ryan Howard. (I’d so love to play catch with Howard, and can’t help but wonder if he’d just throw me grounders because of all of his time as a first baseman.) During that interview Howard shared a story about being pulled over by officers while driving home after a road trip. The officers pulled him over because, “they ran his tags and nothing came back.”

They ran his tags and nothing came back, so they pulled him over.

Our family is hurting right now. They are angry and afraid, confused and conspiracy-driven, selfish and suspicious of everyone. We are so busy shouting and screaming about “my rights” that we have forgotten about other members of our family.

There is a melancholy air when visiting the NLBM, because Josh Gibson probably was the best home run hitter of the last hundred years and Satchel Paige probably would have won 600 or more games in the MLB. Touring the museum is fodder for all kinds of “What if” questions.

Just before the Field of Legends, there’s a case full of Buck’s memorabilia — his glove and Gold Glove Award and Presidential Medal of Freedom and a bat and several other awards and photos. As I stood there, I could hear his voice sharing stories on a TV nearby, and I wondered what baseball’s best ambassador would say in our angst-filled culture if he were alive today.

I could be wrong, but I imagine Buck would have listened. With a gentle smile, Buck would have listened to all of God’s children in this melting pot and provided a safe space for honest conversation to take place. He would have talked and asked questions of those who agreed with him and those who didn’t. He would have suspended judgment and worked to find the best in others, the silver lining, and chosen a way forward together, a way full of hope and joy. And, before parting ways, he would have said, “Give it up,” and ended the conversation with a hug.

(Due to social distancing, we aren’t hugging as much. There’s a lot of people in our family who just need a good hug.)

After visiting the NLBM, we strolled through the Jazz Museum where Louis serenaded me with Hello, Dolly and I listened to all the bass lines I could take in. We stopped by the Paseo YMCA for a game of catch and then headed south.

On the drive to KC and back home, I was grateful for the chance to have honest conversations with Aaron and Josh. Not a subject was off limits. We laughed and commiserated, sharing joys and sorrows. We were family.

And maybe that’s the hardest part of missing sports this year: We have forgotten how to be family, where it’s possible to cheer for opposing teams and still put the relationship first. Or where a new friend is made because they are wearing the same t-shirt you are. Or where hugs and high fives are shared with strangers after Alex Gordon hits a bottom-of-the-ninth home run. (I’m still hoping for a chance to play catch with Gordo. One of these days.)

I didn’t get a chance to introduce Aaron and Josh to NLBM President Bob Kendrick because Bob was too busy sharing stories of the Centennial Celebration of the Negro Leagues on back-to-back-to-back interviews. Bob was helping our family find a way forward by learning from our past.

I guess I’ll have to make another trip to the museum.