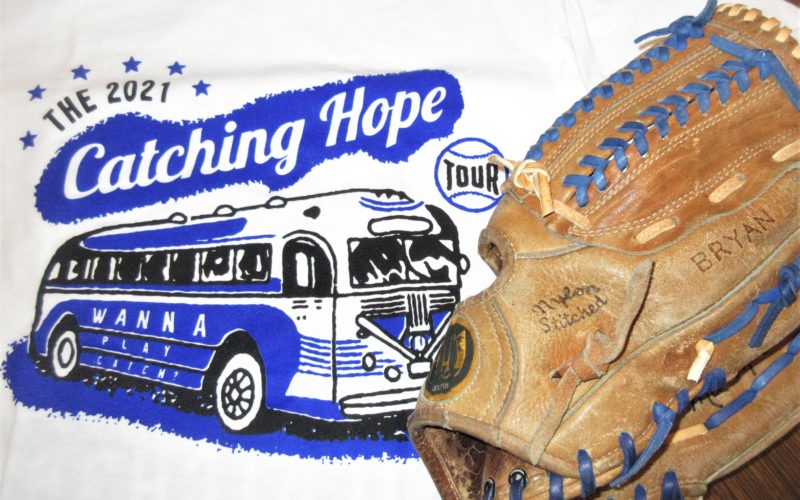 Dad bought his glove years before I took my first breath. He bought it so he could play on a beer-league slow-pitch softball team.

“I was transferred to Cape Girardeau, Missouri in May, 1969, where Charmin Paper Products was opening a new plant to produce Pampers Disposable Diapers. Production employees started a slow-pitch softball team to play other teams in Cape Girardeau. My boss was one of the managers of the Charmin team and invited me to play. What the heck, OK.

“I needed a glove. There was a sporting goods store in downtown Cape Girardeau a few blocks from our apartment. I tried on several gloves, and this Wilson felt the best on my hand, so I bought it even though it was a baseball glove rather than a softball glove. The price was probably about $25. It was always a fairly stiff glove, but my hands were stronger then so I made it work.

Even though the stitching of the goldenrod W has pretty much disintegrated over the years, Dad’s glove is in fantastic condition. Next to the almost empty W circle, the wristband is stamped with the word, “Straplock,” which is a way of tightening the fit around the wrist, though I’ve never tried it. The web is laced together in two rows of ten, separating the solid web into three parts. On the interior of the pinky is the name and signature of Matty Alou, the two-time All-Star outfielder and first baseman. (Odd fact: In 1973, Alou wore #2 playing for the New York Yankees.) The palm of the glove bears three stamps. Closest to the web is a stamp that reads, “Grip-Tite Pocket.” In the middle of the palm, “Pro Model” is underlined twice and starred. And in the heel is the model number, “Wilson A2601.” 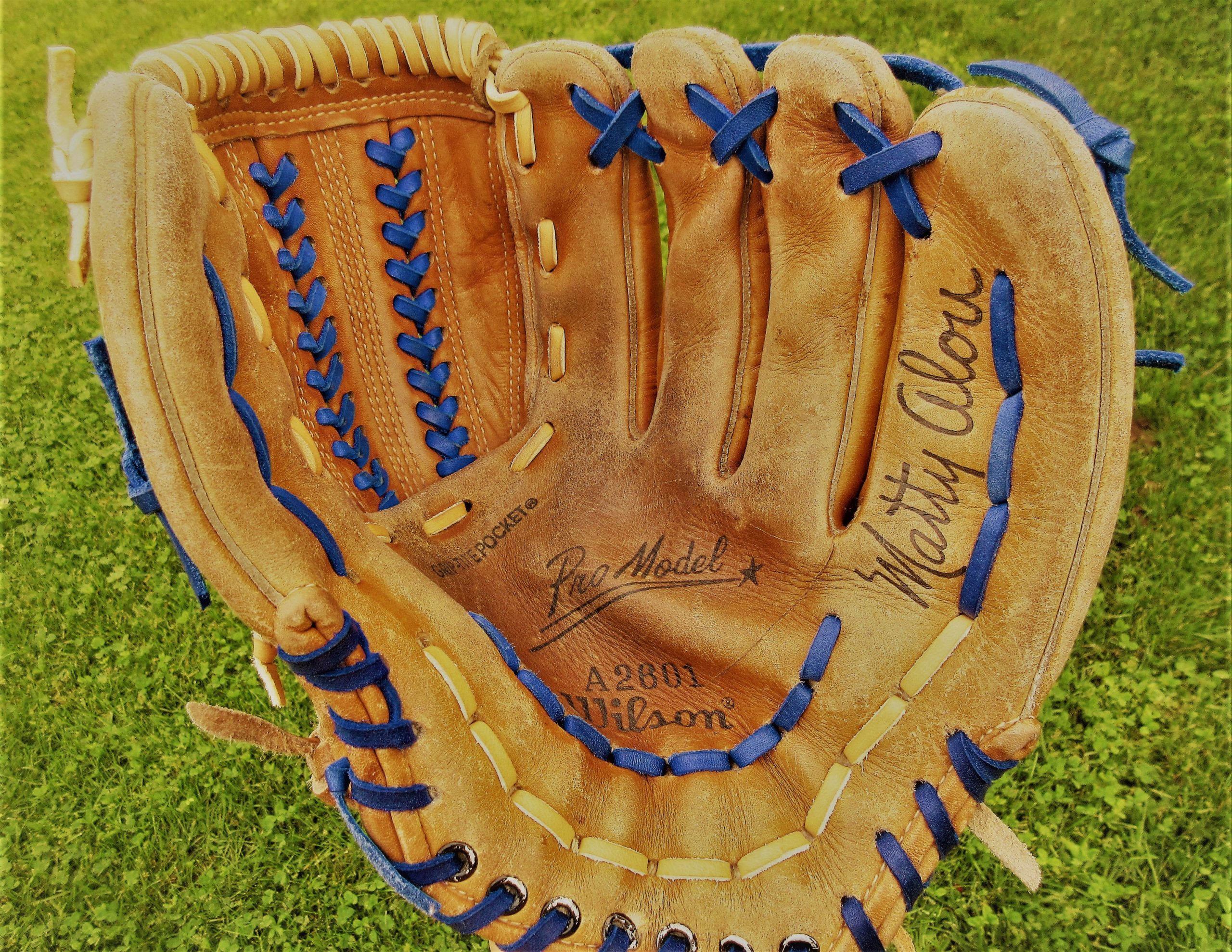 Dad customized his glove. Using an electric wood burning pencil, he carefully inscribed, “Bryan” in all caps on the outside of the thumb. 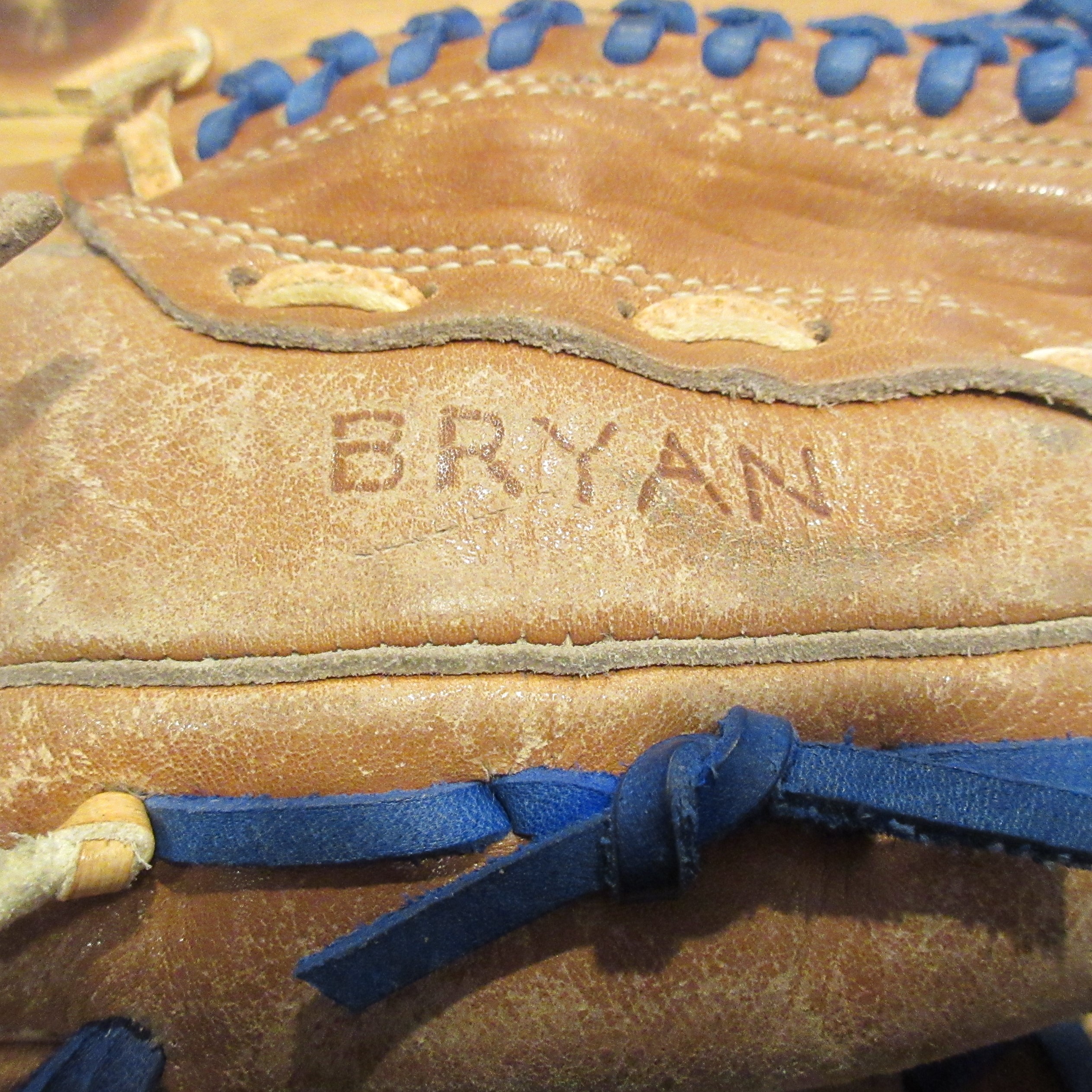 I had the glove relaced last year, after several of the original laces broke and it was no longer safe to use as a back-up, catch-playing glove. I asked Dad if he wanted the normal brown laces or to add some color to it.

“Give it some color. That could be fun” he said.

Two colors were used to repair the mitt — a light tan lace across the heel and outlining the webbing. Royal blue lacing is across the tops of the fingers, above and below the tan heel lacing, and holding the web together. The thumb loop and pinky loop, however, are still the original laces.

Dad’s glove is more than 50 years old. Along with the memories of a few slow-pitch softball seasons and thousands of games of catch in the backyard and middle of the street, the glove carries with it a face-saving snag.

“For some unknown reason, I was made pitcher. Maybe being tall helps get a better arc on the ball, I don’t know. The nice thing about slow-pitch is the pitcher has time to get into a defensive position before the ball is hit. Standing so close to the batters was scary, so I made sure to get my glove up after releasing the ball. Sure enough, a big fellow tagged one of my pitches and it came back straight towards my face. The glove was already up and ready, and fortunately reflexes got it adjusted enough to catch the ball, which made a loud “smack” as it hit the pocket. The batter just walked back to his bench with a little smile on his face, shaking his head. His manager yelled out, “Lookee what I found!” Yeah, it was a lucky catch, but that glove saved my life, so I still love it.”

Growing up, I remember trying to get my hand to fit in Dad’s glove, but it was too large and the leather too stiff. Now when I put the glove on, my fingers rest in the indentions his fingers created. There’s a well-worn spot for the index finger on the back of the glove, which not only helps increase the pocket size, but prevents finger bruising on harder throws.

A number of years ago, a study conducted by the Austin Institute for the Study of Family and Culture discovered the correlation between a father’s daily presence in a family and baseball.

“Children are 25% more likely to play baseball or softball when they live with their dads.”

The latest research also shows that, by age 14, more than 70% of ballplayers have stopped playing ball. David Ogden is a researcher at the University of Nebraska. Of the steep decline in kids playing baseball near the age of 14, he wrote, “We are looking at a generation who didn’t play catch with their dads.” Only a very slim minority of kids are playing catch on any kind of regular basis.

I am grateful for the years of playing catch with Dad, for the times of throwing curves and practicing pop-ups. He turned 77 this year, which is a really cool number, I think. We last played catch in his backyard just a few weeks ago. Of course, he used his glove.

Each year, come Father’s Day, I struggle to think of ways to celebrate having him as my dad. There’s nothing I can give my dad that he can’t just as easily get for himself. The Catching Hope Tour starts on Father’s Day, but Dad won’t be joining me.** He’ll be tackling the hardest Sudoku he can find, enjoying Mom’s cooking, and helping take care of my dog who absolutely adores him.

To honor him, I’m going to use his glove.

I’ll use his glove when I play catch by the Buck O’Neil Mural and in Millennium Park and at Beyer Stadium and at the Field of Dreams. I might even take a few pictures of just his glove in each city, somewhat like a Flat Stanley tribute.

It’s not much, I know. But it’s something, a small way of saying Thank You, a way to let him know he’s being thought of and greatly appreciated as I make new catch-playing friends and give away gloves.

“The only other play I remember from playing softball was the time I took out the first baseman after hitting a grounder to the shortstop. The first baseman was standing erect on the bag rather than stretching. I ran into him full tilt, and turned a complete flip in the air landing on my butt, just like the ball carriers in football do when the safety throws a body block at the runner’s knees. The manager ran up to me and asked if I was OK, and I was, except the throw beat me and I was out. The first baseman was limping around, trying to catch his breath. But they gave me the baseline every time I was running after that.”

**I won’t be playing catch with my daughters on Father’s Day, either. They are busy serving at a youth camp, cooking and cleaning, creating a sacred space for other teens to come play and hear the God the Artist, God the Musician, God the Storyteller whispering into their lives. But they’ll be wearing their Catching Hope Tour t-shirts on Father’s Day, which is a great gift, I think.