I finally made it to my first Omaha Storm Chasers game last night at Werner Park.

There was a new record high temperature for the day — 101 degrees! — and the Storm Chasers invited Caleb (Day #72) to throw out the first pitch as a special guest of the team. It was the last Sunday of the month, so the team invited fans to play catch in the outfield. The grass was so picture perfect, one of my cousins thought it was fake. 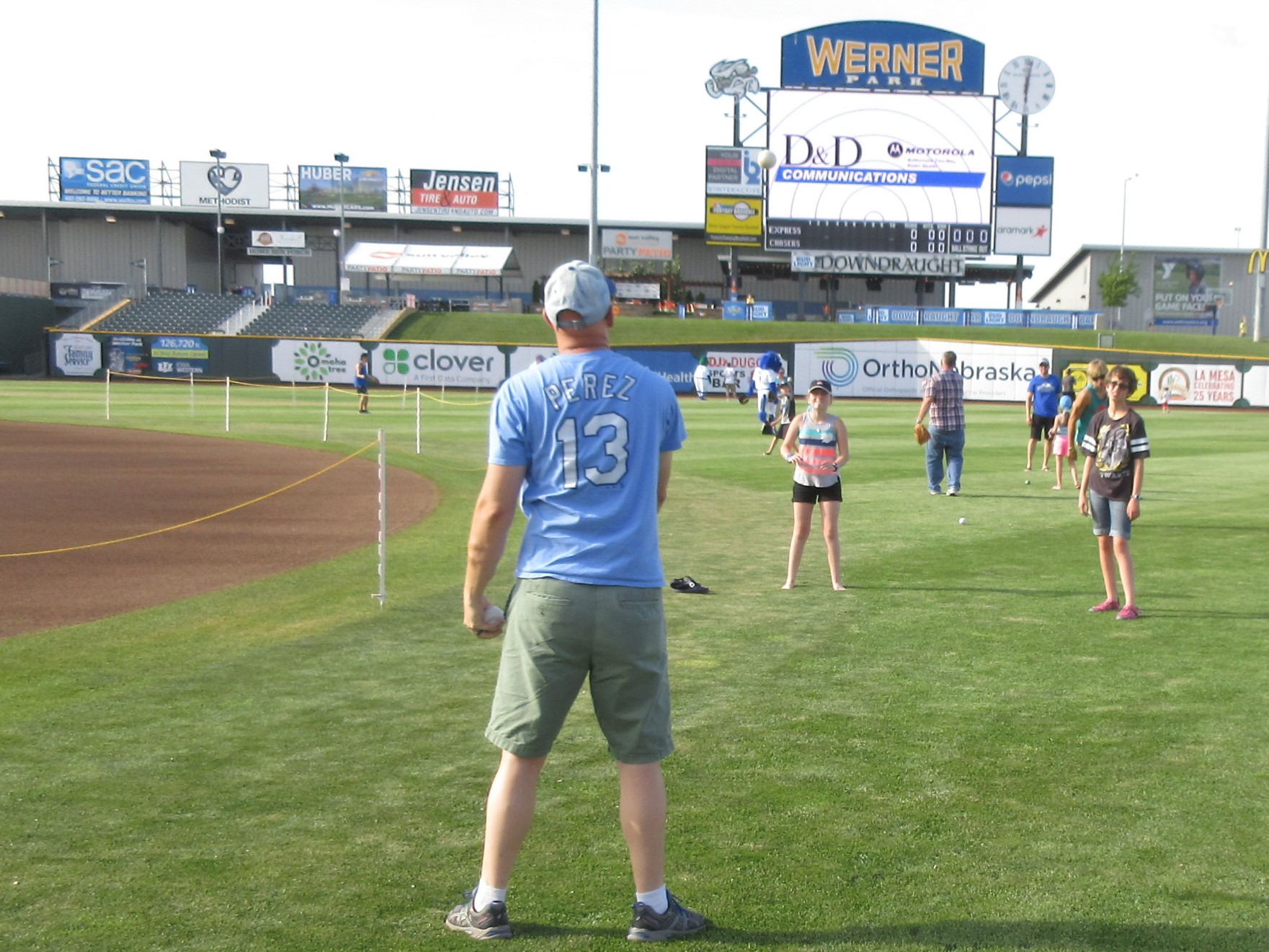 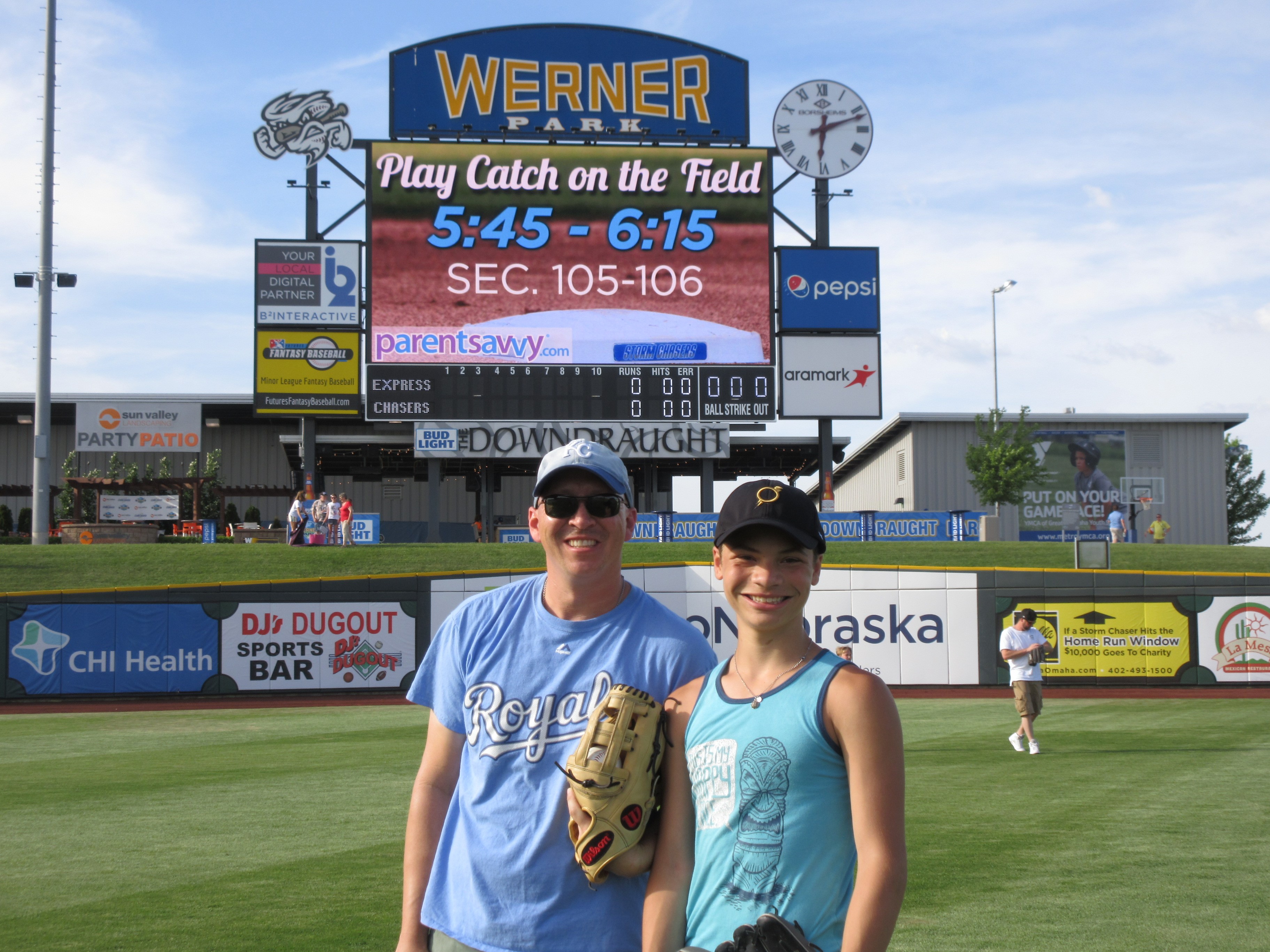 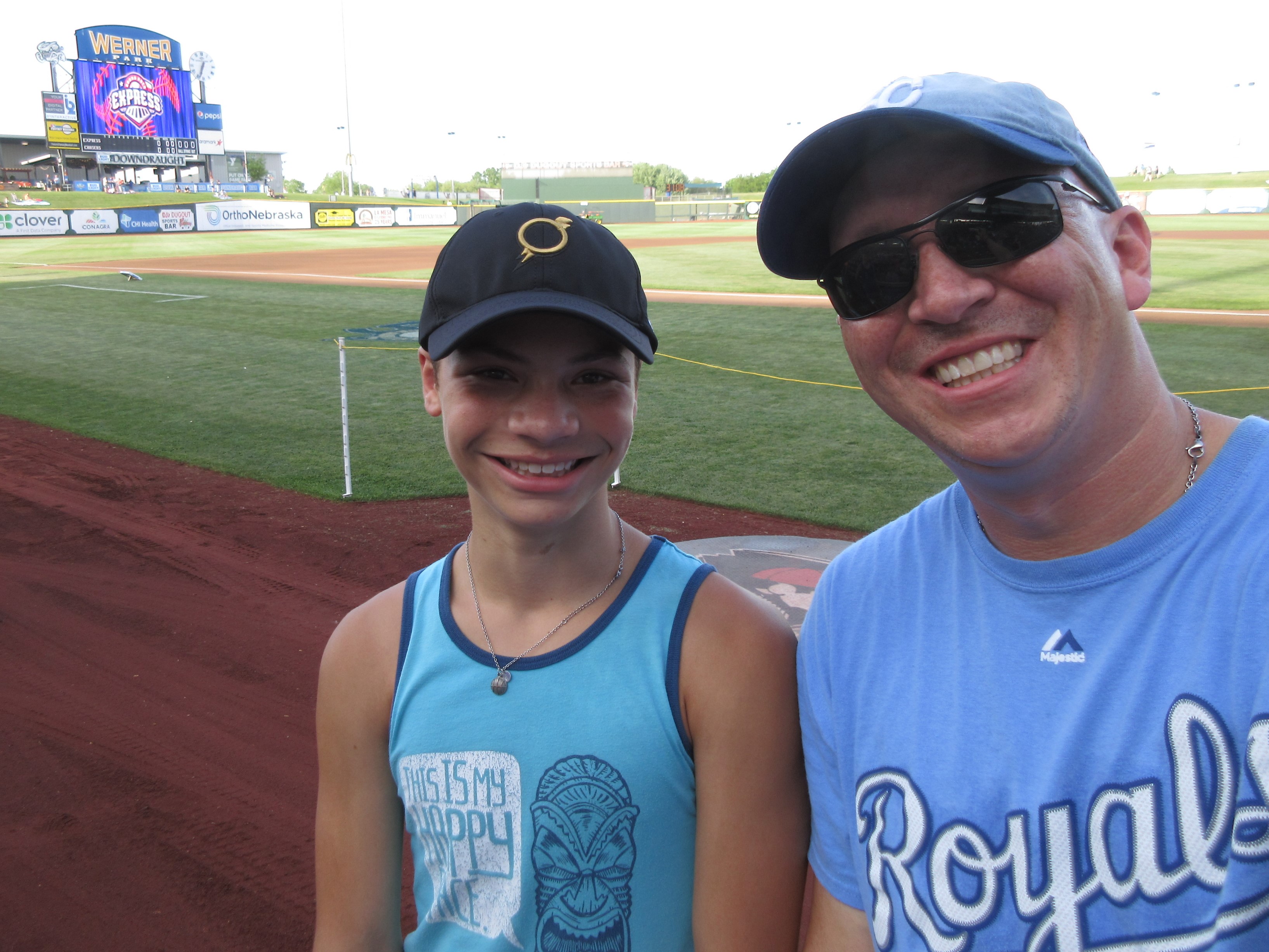 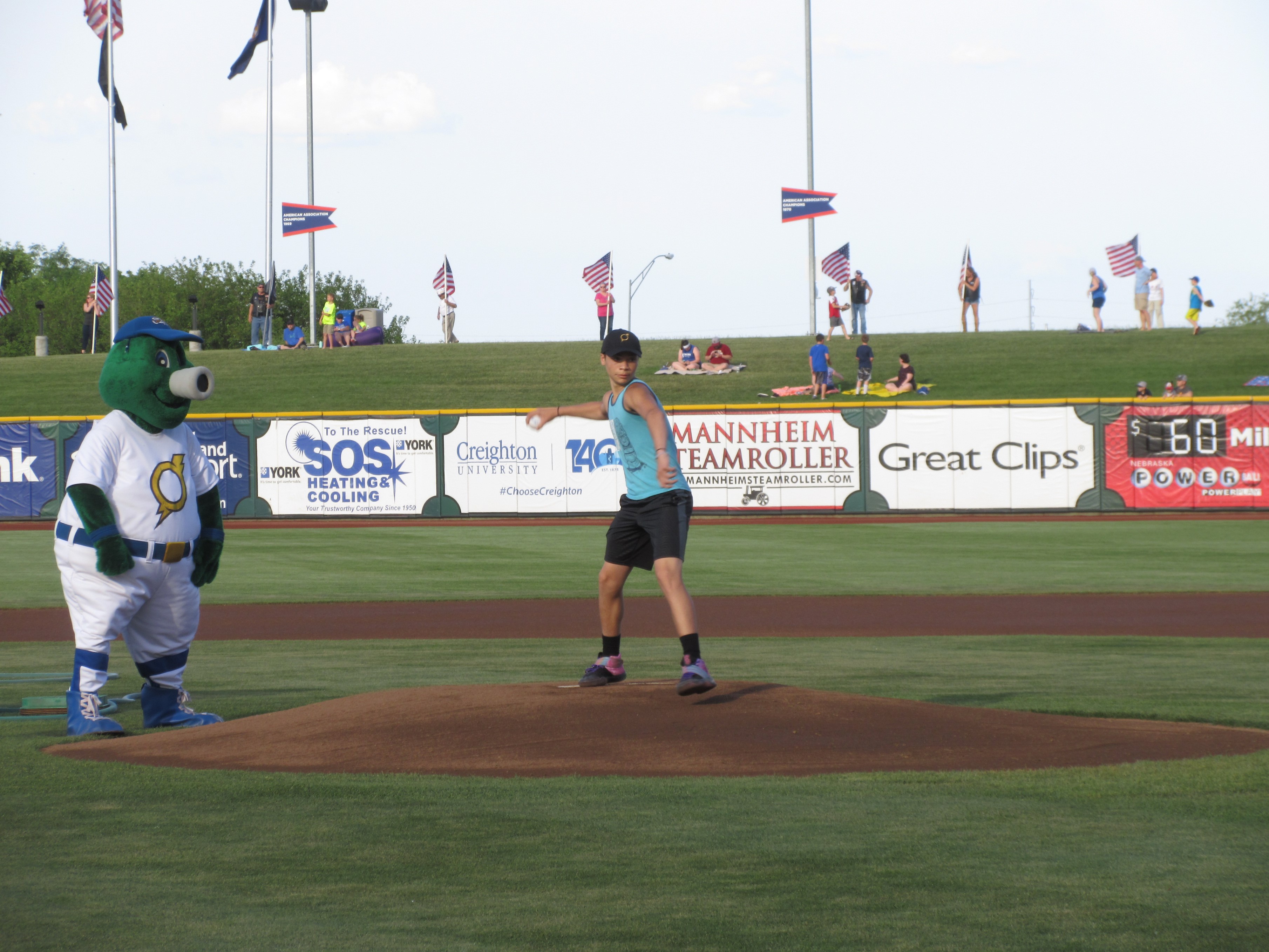 After Caleb threw a strike, we sat in left field near Paulo Orlando. I cheered for him every time he took and exited the field. In the sixth inning, he pointed in my direction.

Martie is the president and general manager for the Storm Chasers. He’s been with the team since 2007 and was the Baseball America Minor League Executive of the Year in 2013. He’s also a former professional drummer and a huge Star Wars fan.

I first visited with Martie for the America at the Seams project. I heard a Storm Chasers story that I thought was a perfect representative for the state of Nebraska. Miles Mortensen, the 4-year-old son of Omaha Storm Chasers reliever Clayton, has battled Stage IV neuroblastoma since the age of 2. The Storm Chasers supported Miles and Clayton by hosting a Super Miles night with specially designed jerseys.

(Photo credit to the Storm Chasers.)

“The idea was Brian Duensing’s. He’d only been with the Royals for a few months, and now he was doing something to help a teammate he hadn’t known all that long.”

Teammates and organizations taking care of each other like family is one of my favorite parts of baseball. Tip of the hat to Brian and the Brian Duensing Foundation.

I remembered the Super Miles night because Alex Gordon was in Omaha on a rehab assignment. I thought about bidding on his jersey, but it quickly surpassed my budget. I wore my Gordo t-shirt today intentionally.

I introduced myself to Martie and gave him a copy of Run Home & Take a Bow as a thank you for his time. Brett’s cover art for that book is incredible. Martie ran the book to his office and returned with a Jarrod Dyson bobblehead. In other words, I successfully negotiated a trade before we even played catch.

Martie has three sons. He played catch about a month ago with his youngest, Cass. His favorite players include: Ryne Sandberg, Rickey Henderson, Barry Bonds, Al Hrabosky, U. L. Washington, and Jesse Orosco.

This year marks the Storm Chasers / Royals / Golden Spikes 50th Season and there are several fantastic ways the organization is celebrating that achievement including bobbleheads and flashback weekends with a museum at the stadium.

What I love most about minor league baseball is their thoughtful and creative fan engagement. From fundraisers to support the community to the Hurl the Pearl in between innings, the Storm Chasers are doing an excellent and commendable job of showing how baseball is more than just a game.

For our game of catch, Martie wore the glove that was used to catch Caleb’s first pitch. We spread out in front of the Storm Chasers dugout on the grass along foul territory. I knew from my time as field crew not to dare touch the dirt. I threw some of the best knuckleballs I’ve thrown this year to Martie. He appreciated my attempts.

“The best part of being a GM is seeing people, fans and players, making memories at the ballpark.”

I will remember the 20-odd people that came out to watch Caleb’s first pitch for a long time. Getting a chance to run around in centerfield and play catch is another memory I’ll cling to, as well as the ever-so-brief acknowledgement from Paulo.

I saved my most important questions for last.

“What is baseball teaching you about life?”

“Have you seen Solo yet?”

Enjoy the movie, Martie, and tip of the hat to the Storm Chasers for telling great stories through baseball.