To be a superhero requires having a special heart.

Superheroes fight evil and save humankind time and time again, never requesting an off day or asking for special services.

Sometimes evil is a dictator who tries to take over the world.

Sometimes evil is a playground bully.

A team of expert doctors attempted to fix some of the broken pieces in Bigby’s heart.

And that was the day Iron Boy Bigby was born.

His big brothers taught him about the important things in life: cartoons, crayons, and chocolate.

Iron Boy was a little too small to understand everything they were saying so he just smiled.

Smiling is a grossly underrated superpower.

Doctors expected Bigby to spend weeks in the hospital recovering from the surgery.

For three years, Iron Boy Bigby grew and did what boys do.

He wrestled and played with his brothers.

He watched cartoons and ate crayons and colored his face in with chocolate.

He ran and jumped and made new friends at the playground.

One day Iron Boy Bigby tried to run a little too fast. He tripped and fell on the sidewalk.

He scraped knees and elbows and had a knot the size of an egg on his forehead.

Such is the life of a growing superhero.

He tired quite easily and took lots of naps.

Doctors knew it was time for another surgery.

Shortly after his third birthday, Iron Boy Bigby would have to have his third heart surgery.

His parents tried to prepare him for the surgery, explaining how the doctors would have to cut open his chest to work on his heart.

At first, Iron Boy didn’t like the thought. He imagined big and scary things.

When his parents explained that this surgery would help him to run faster, to play longer, to better rid the world of the evils of broccoli, Iron Boy Bigby started to smile.

“When I grow up, I will be big and strong like Iron Man. I will fight villains and go visit children in Iron Man’s hospital.”

The surgery was mostly a success.

Three days after his third heart surgery, Iron Boy Bigby was dancing in the hospital, bringing smiles to everyone around him.

Superheroes are all about hope.

Bigby is my godson. The only godparent I knew about growing up was the fairy godmother in Cinderella, but that doesn’t help much as it is serious work for me to turn a pumpkin into a mere jack-o-lantern.

Reason #1 why I do not think I’m a very good godparent: Due to the distance between us, it has been almost three years since I last saw Bigby. Thankfully, it took about 5 seconds for him to warm up to us. His very first question to me was, “We are going to play baseball, right?”

He told us stories and Sophie gave him a piggy-back ride and Kaylea read him books and by evening’s end we were comparing surgery scars.

Tim is Bigby’s dad. Tim is also the person who first introduced me to Nathan (Day #149). “I know someone who likes baseball like you do. He makes art from baseballs.” Were it not for Tim, I never would have been part of America at the Seams.

Bigby’s diagnosis is the same as that of Jimmy Kimmel’s son with a couple other little loopholes thrown in. “If I had been born with Bigby’s heart, I wouldn’t have made it. We just didn’t have the technology or know-how back then,” Tim said.

After his brothers left for field day at school, we celebrated Bigby’s birthday a few weeks early — Star Wars toys and a soft baseball. Both families then headed to the park to play catch. We found a great grassy location behind the ferris wheel of the Quad City River Bandits, right next to the mighty Mississippi River.

Tim and I started playing catch first demonstrating how the glove is used for catching and the bare hand is used for throwing. Bigby quickly caught on and we worked into a neat rhythm. I’d throw the new ball to Bigby. He’d throw it to Sophie. She’d throw it back to me. He then switched to a baseball Sophie had drawn on a couple of years ago. The ball was a gift that had his name and some illustrations on it. 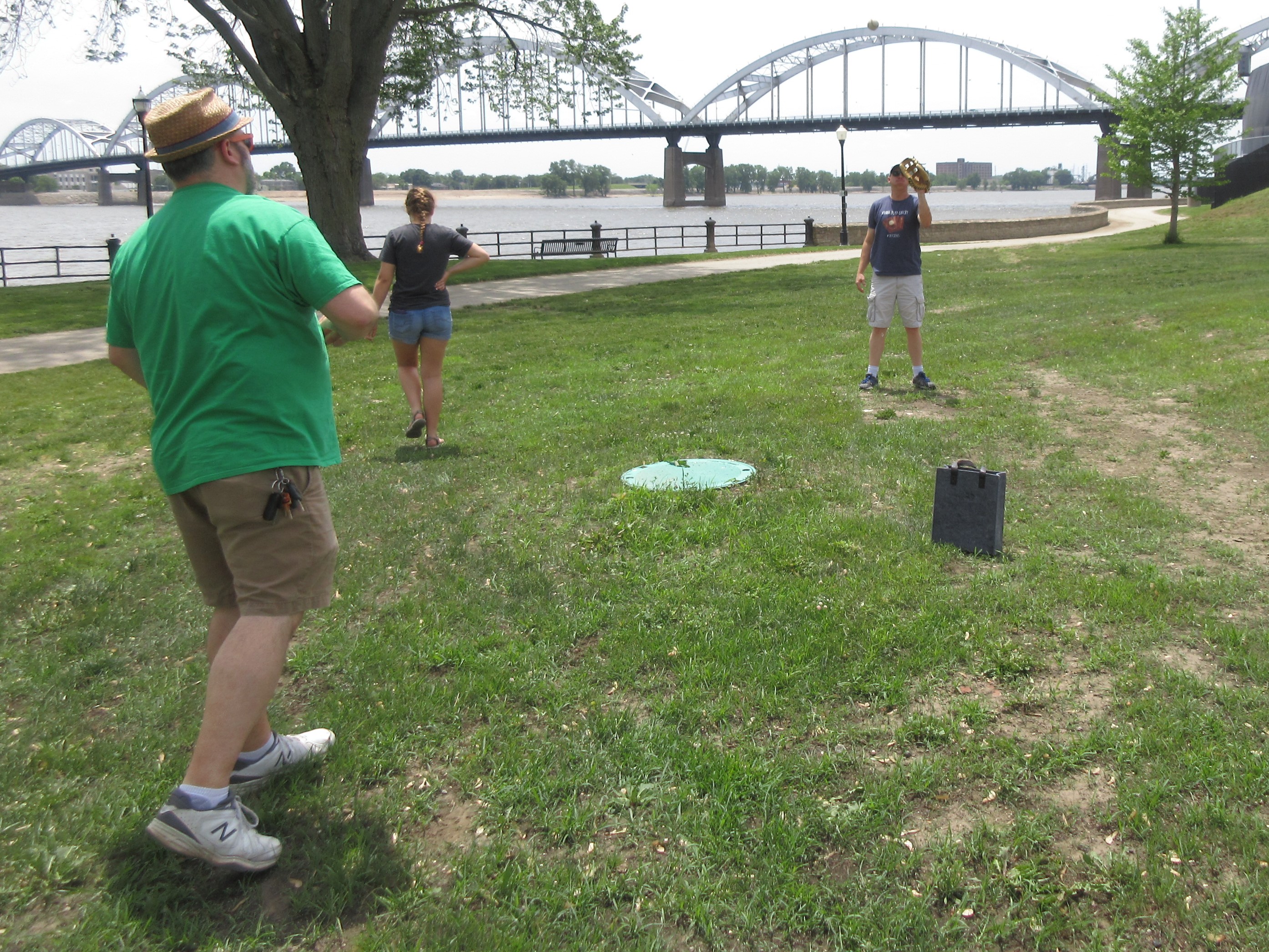 After catch, I saw Bigby running through the field — fast, fast, fast — and marveled at the miracle that is this little boy.

Before catch, I was trying to get a picture of Bigby on my phone. He held it for little bit and commented, “I like your phone.”

And that reminded me, I need to introduce Iron Boy Bigby to my friend Thor (Day #6). 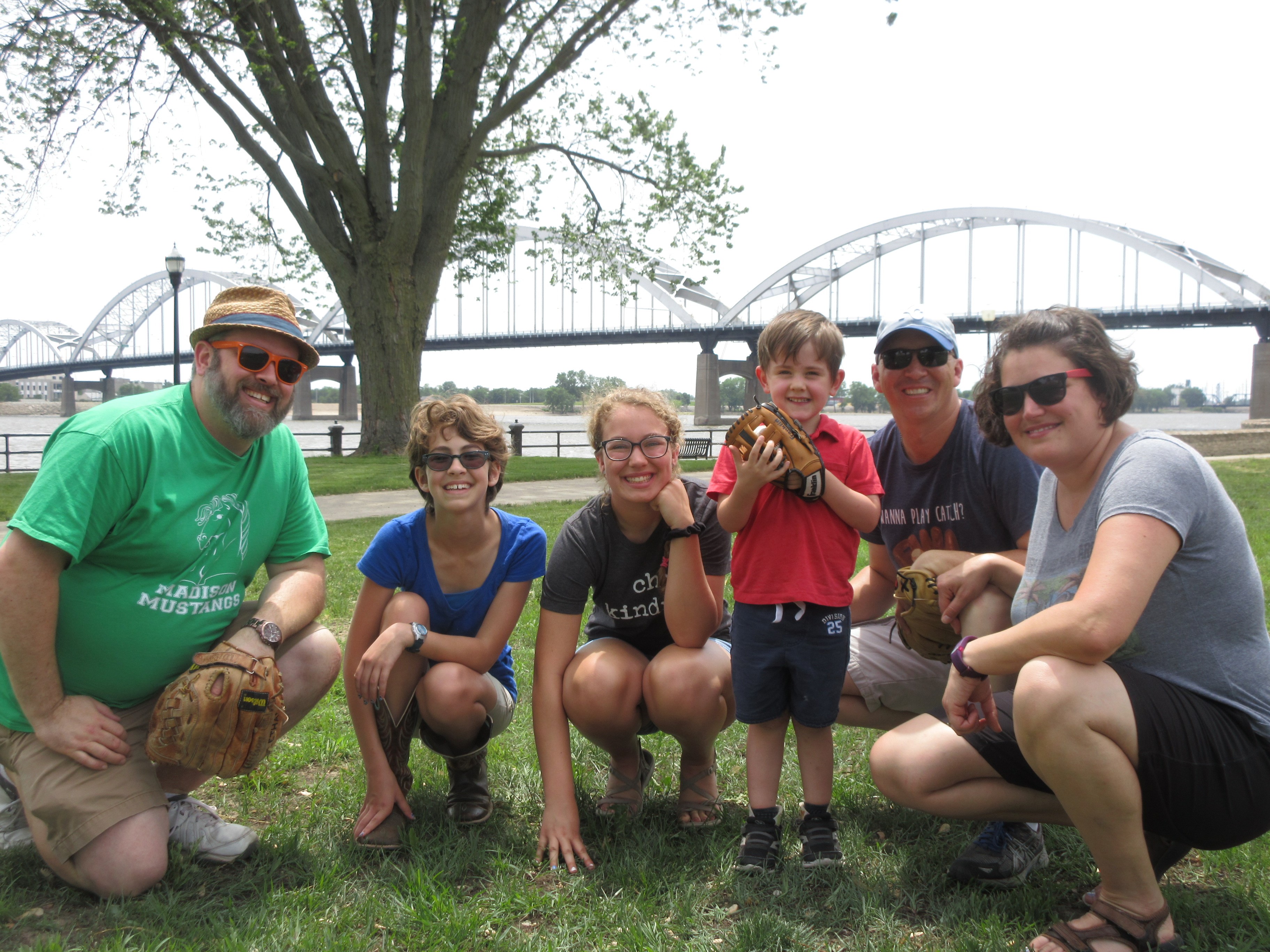