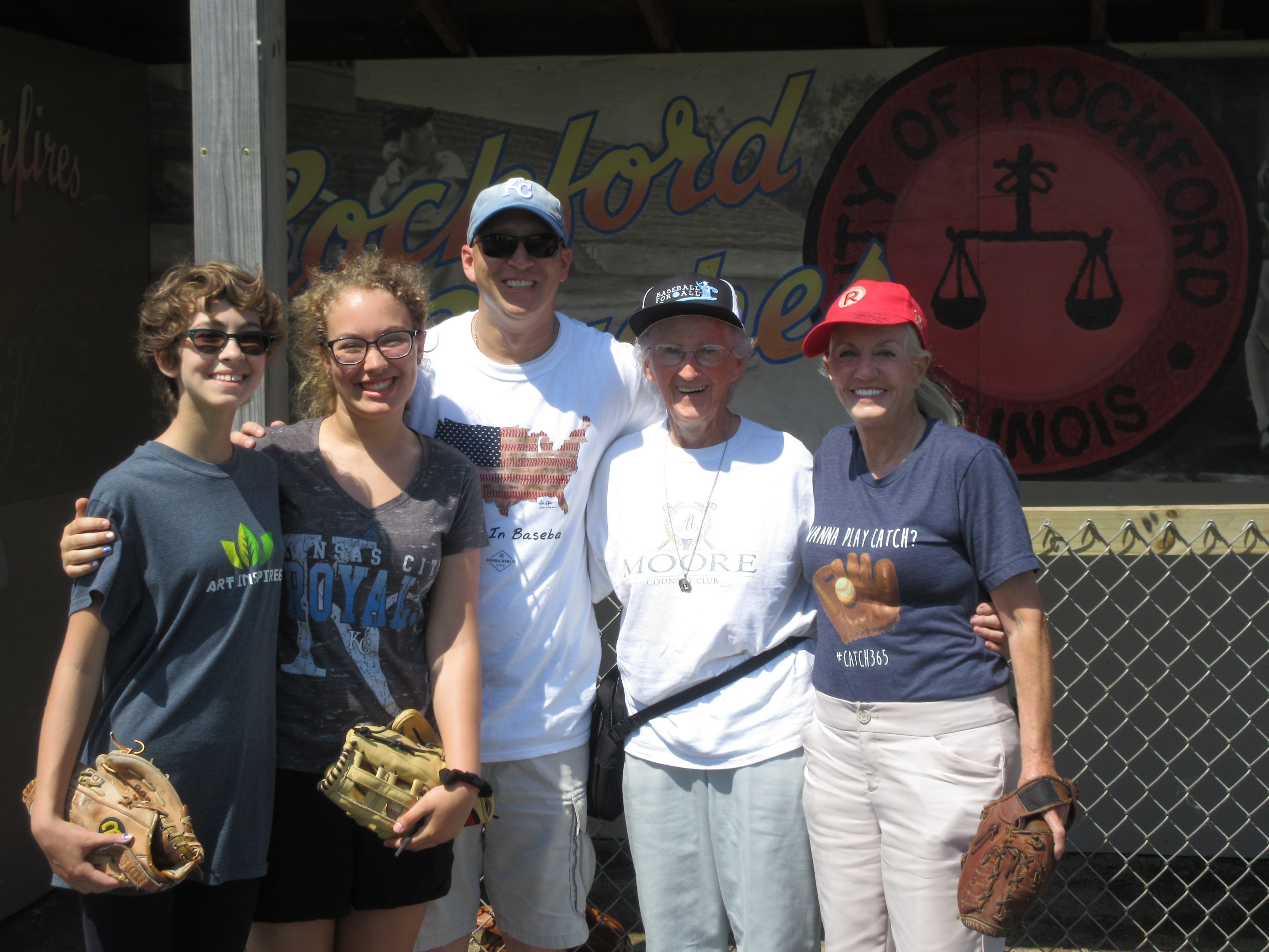 A League of Their Own (1992) is filled with quotes that bounce around in my brain.

The hard is what makes it great.

Baseball is what gets inside you. It’s what lights you up, you can’t deny that.

Yesterday that was a ball, tomorrow it might be a ball, but today it’s a strike.

And, of course, There’s no crying in baseball!

This year marks the 75th anniversary of the first season of the All-American Girls Professional Baseball League, the real league that inspired the movie. The first games were on May 30, 1943 with South Bend against Rockford at Beyer Stadium and Kenosha playing Racine.

“In the movie, I was the one that slid into home,” Mary said. “If you watch through the credits, you’ll see me. I was playing left field in that game. You can also spot me walking into the Hall of Fame and stopping to take a picture. I was also a designated Canadian for the team cheers.”

When I was at the National Baseball Hall of Fame last year, I was fascinated by the display of the AAGPBL. My favorite part was reading the story of speedster Sophie Kurys who set the single season stolen base record.

“She’s from Michigan, too. They used to call her the Flint Flash,” Mary said. “Once she got on first base, she’d be on third base two pitches later.”

My family drove to Beyer Stadium and the girls warmed me up while we waited for Perry and Mary. 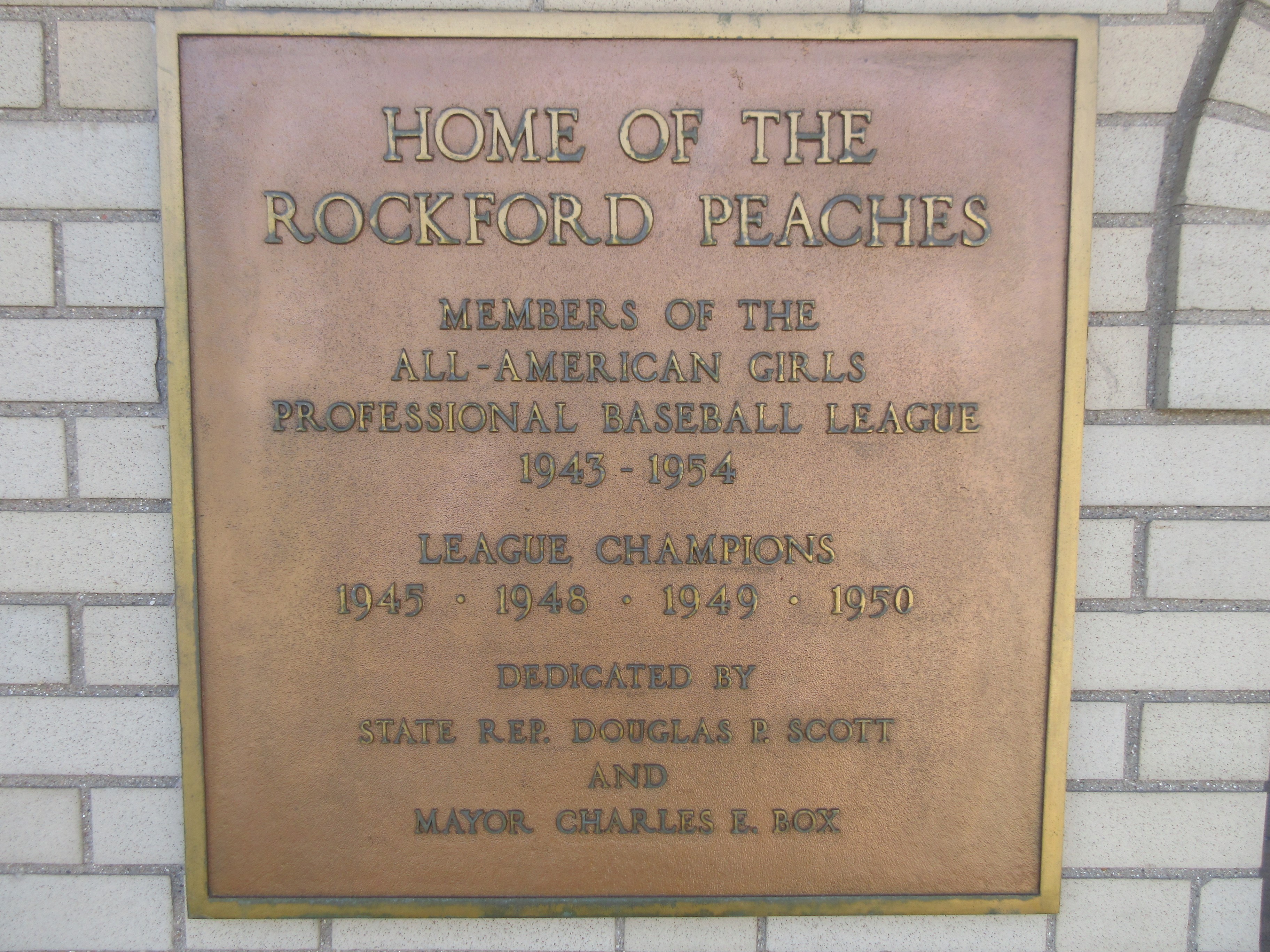 Perry has been calling games since 1981 and works more than 150 games annually. She’s one of only a handful of professional female umpires. A former Jeopardy champion, Perry loves Dr Pepper like I love Dr Pepper and has been incredibly supportive of Catch 365 from the beginning. It is because of Perry that I was able to connect with Mary.

Mary played second base for the Springfield Sallies and led the team in several offensive categories in 1950 — hits, total bases, home runs, runs scored, and RBIs.

“But, during the off-season, I injured my throwing hand in a work-related accident.”

Because of the accident, Mary lost part of one finger and two others were permanently damaged. She missed the next season before returning in 1952. Toward the end of the 1952 season, Mary slid into second base at Beyer Stadium and severely injured her ankle.

“It would have been better if I broke it.”

I really, really didn’t want to talk about broken ankles.

We were playing catch at the field where Mary’s career with the AAGPBL ended. But Mary expressed no regrets whatsoever. She seemed thrilled to play the game, to know that she was good enough to be a professional ball player.

Perry and Mary and others are in Rockford this weekend to launch a $7 million dollar campaign to build an International Women’s Baseball Center and Museum. I bet Simone (Day #143, Part Two) will have a plaque whenever that museum is built. I can only hope I get the chance to come and tell stories and play catch with ball players of all ages when it becomes a reality.

“The center and museum will be right across the street from the field,” Perry said. “It’s really a dream come true. Not only will it honor the history of AAGBPL and the ladies who played in the league, but it will honor the history that preceded them and make it possible for girls to continue participating in the game. And there will also be good, green space for umpiring training!”

“The center will also help get little kids interested in the game, the best way to grow the game,” Mary said.

Mary grew up in Michigan and was a Tigers fan. We swapped stories about Tigers slugger Miguel Cabrera.

As a Royals fan, I’ve been conditioned to be afraid of Miggy at the plate. But I do love watching him compete with passion and a great sense of humor.

Perry, for some unknown reason, is a Christy Mathewson fan. She even has a tribute to him on her license plate.

“I’m mildly obsessed with him. Back when baseball was pretty rough and tumble, he was a stand out. He never played on Sunday because he promised his mom he wouldn’t and he kept to his promise. He served in World War I and was injured in a training accident. He died several years later as a direct result of that accident, inhaling mustard gas. I really think Mathewson deserves recognition for being ballplayer who died in service to his country, on those plaques that are hanging at Cooperstown.”

I asked Mary about her best day on the field.

“Probably the triple play we turned against Chicago. They were all tag plays, no force outs, no fly balls. They had runners on first and second and the gal hit a ball to left field. The runner on second tried to score, but she got caught in a run down between home and third and was tagged out. The runner on first was headed to third but stopped and ran back toward second. The hitter had rounded first and was also headed to second. I was standing on second and they threw me the ball and I tagged them both to end the inning.”

Mary and I played catch just outside the newly re-painted third base dugout and Perry filmed for a few moments, which made me somewhat nervous. Then again, I always get nervous whenever I play catch with a professional ballplayer. I loved the old Wilson glove Mary was using. She laughed when I showed her the even older Wilson I was going to use.

Perry took a turn playing catch and Kaylea and Sophie joined us. 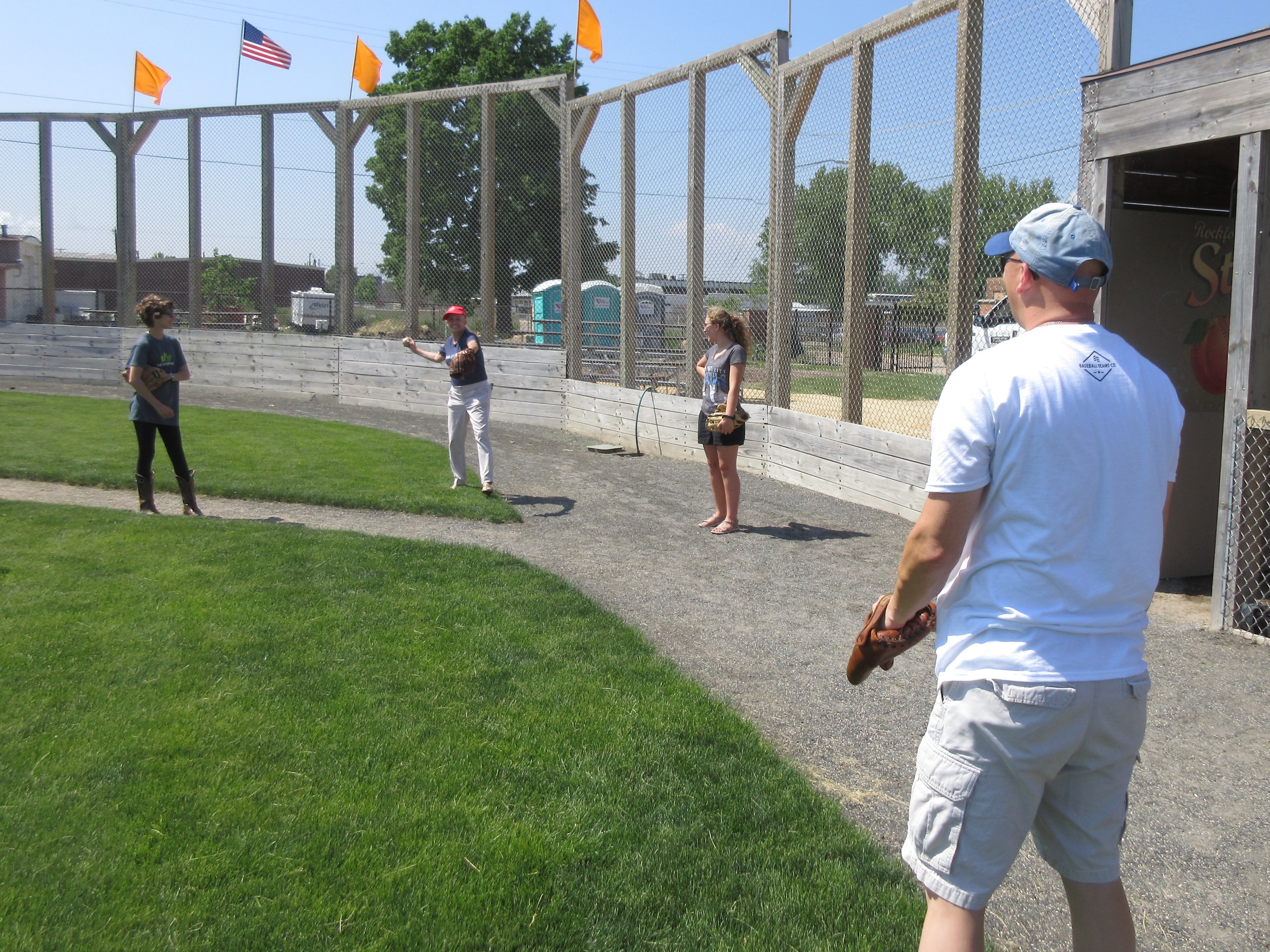 “Baseball gets in your head, in your mind, in your body. You get to go outside in the fresh air and meet new people. It teaches you discipline and respect. This game teaches you all kinds of life lessons,” Mary said.

Perry added, “I love the energy of the game. The way it makes people think as well as react. The way it engages both mind and soul. There’s so much to love about it. It’s not all the pomp and spectacle of the major leagues. It’s something as simple as a game of catch and talking about stuff that matters and making friends.”

“You don’t have to like people to play ball with them. We learned to cooperate, to be disciplined, to have and treat others with respect. The whole world was different. Money didn’t mean anything in particular. We played for the love of the game,” Mary said.

“Baseball is life. Anything you learn from or about baseball can be applied to your daily life, to any relationship you have. When I observe ballplayers, those who succeed are the ones who absorb the lessons in front of them instead of getting angry. Anger prevents them from being successful. That’s the difference. It’s not about talent, really, but harnessing the energy and not allowing their emotions master them. They know how to make their emotions work for them, so the result is what they want.”

Perry continued, “My dream is for the game to expand so that the inclusion of girls and women is so completely normal that it’s not even worth mentioning. Because of ladies like Mary.”

Thank you, Mary and Perry, for sharing your stories and your joyful passion for the game!