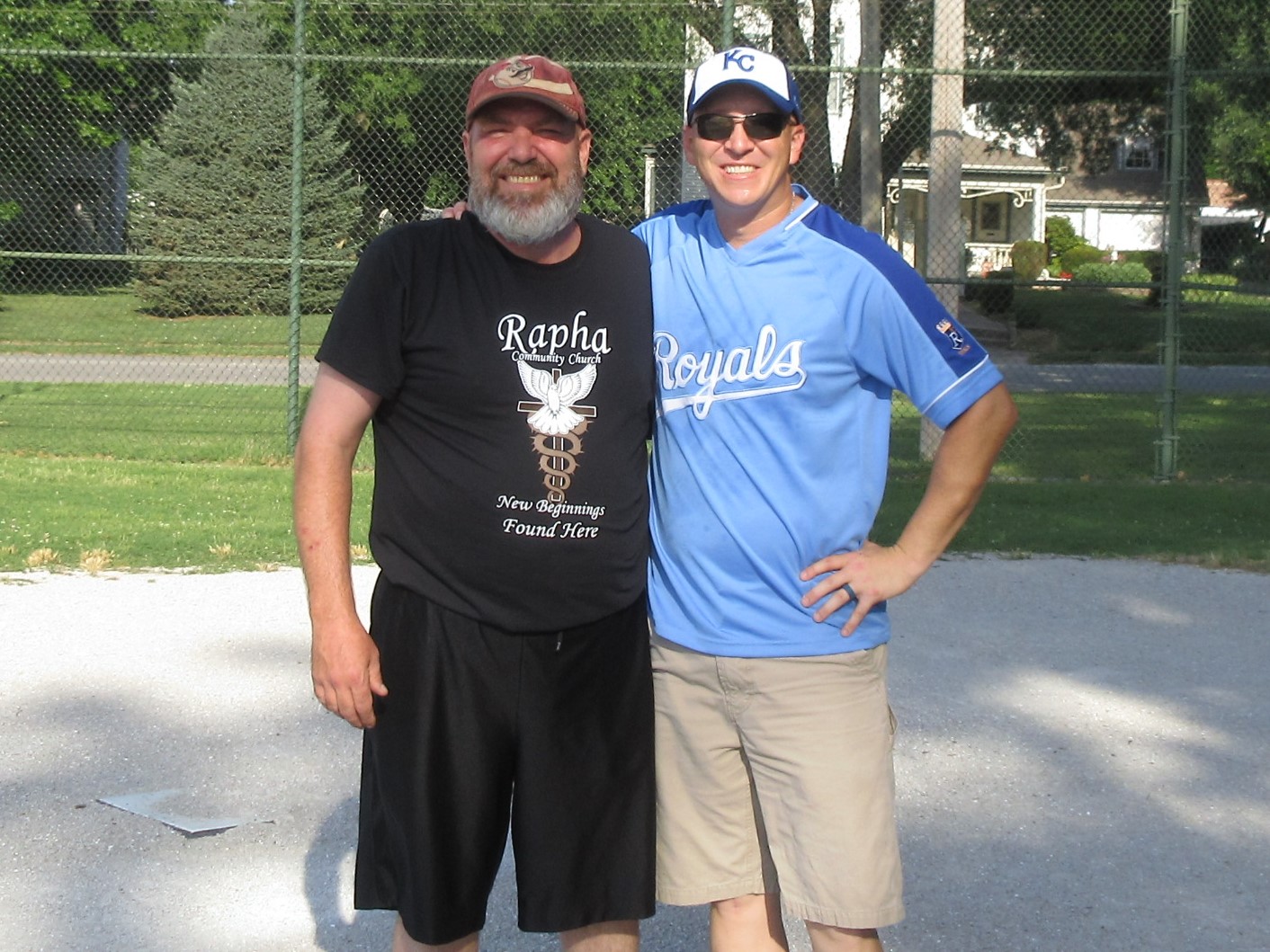 Sundays are for doubleheaders.

For Father’s Day, Kaylea and Sophie gave me a new Royals hat. The powder blue hat served me well preventing sunburns, creating odd tan lines, and capturing sweat through multiple months of playing catch. But even after being washed multiple times, the powder blue hat gave off quite the distinctive aroma. I think they gave me a new hat so they wouldn’t have to smell the old one through another road trip. Breaking in a new hat is much like breaking in a new glove, the best way to do it is to play catch.

“I need to see my family at some point this summer. I thought it would make for a great trip. It would be a great start to my vacation.”

We celebrated his birthday at Hurts Donut Company without any singing. Jim is from Kentucky. He drove 611 miles yesterday and took a slight detour to stay the night in Springfield on his way to Kansas. He didn’t travel alone, but was accompanied by his wife, mom, and nephew Ronnie.

Jim is a Cincinnati Reds fan and his hat was quite broken in.

“Chuck Harmon signed it a couple years ago, the first black player for the Reds. I was wearing it riding my motorcycle and got caught in a rainstorm and you can’t see the autograph anymore.”

We told stories of Pete Rose and Ken Griffey, Jr. and Jim shocked me when he said his favorite non-Reds player was a third baseman for the Royals. Ronnie started talking about the Pine Tar game and I wished I had known; I would’ve worn my Long Ball City t-shirt. Jim told me stories of growing up with modest resources.

“Baseball was an outlet for me. On the field, it didn’t matter about your income level. You give all you’ve got, you play hard, and go all out for the team.”

That is the Pete-Rose-Charlie-Hustle effect. I practiced and played the same way. If your uniform wasn’t dirty, did you even play ball?

Jim tore the rotator cuff of his throwing arm several years ago.

“Took a rec league softball game a little too seriously,” he said with a smile. “I damaged my other shoulder last year, too. I never had surgery, but I don’t try to throw anything as hard as I can.”

I understand that feeling completely.

After donuts were devoured and coffee consumed, we drove to the downtown baseball field. Jim stood by home plate. I was near first base. We talked games from years past and told stories of our kids and practiced knuckleballs, curveballs, change-ups, and sliders. Jim’s knuckleball reminded me of Shane’s (Day #153) forkball — practically no spin with very good movement.

“I was at work when I first read your story and about your catch playing goal. I got it immediately. There’s just so much negativity in this world, on the news every day. And you were playing catch to have fun and to connect with people. I thought it was cool and wanted to be a part of it.”

In January, I said Yes to Jim long before my family began to dream about going on multiple catch-playing tours of the United States. That Yes now launched our second trip — The Tour of Play.

Einstein once said, “Play is the highest form of research.” So, my family is going taking a trip where we’ll log miles and do lab work, intentionally researching the power of play in creating memories and making new friends.

After all, I’ve got a new hat to break in. 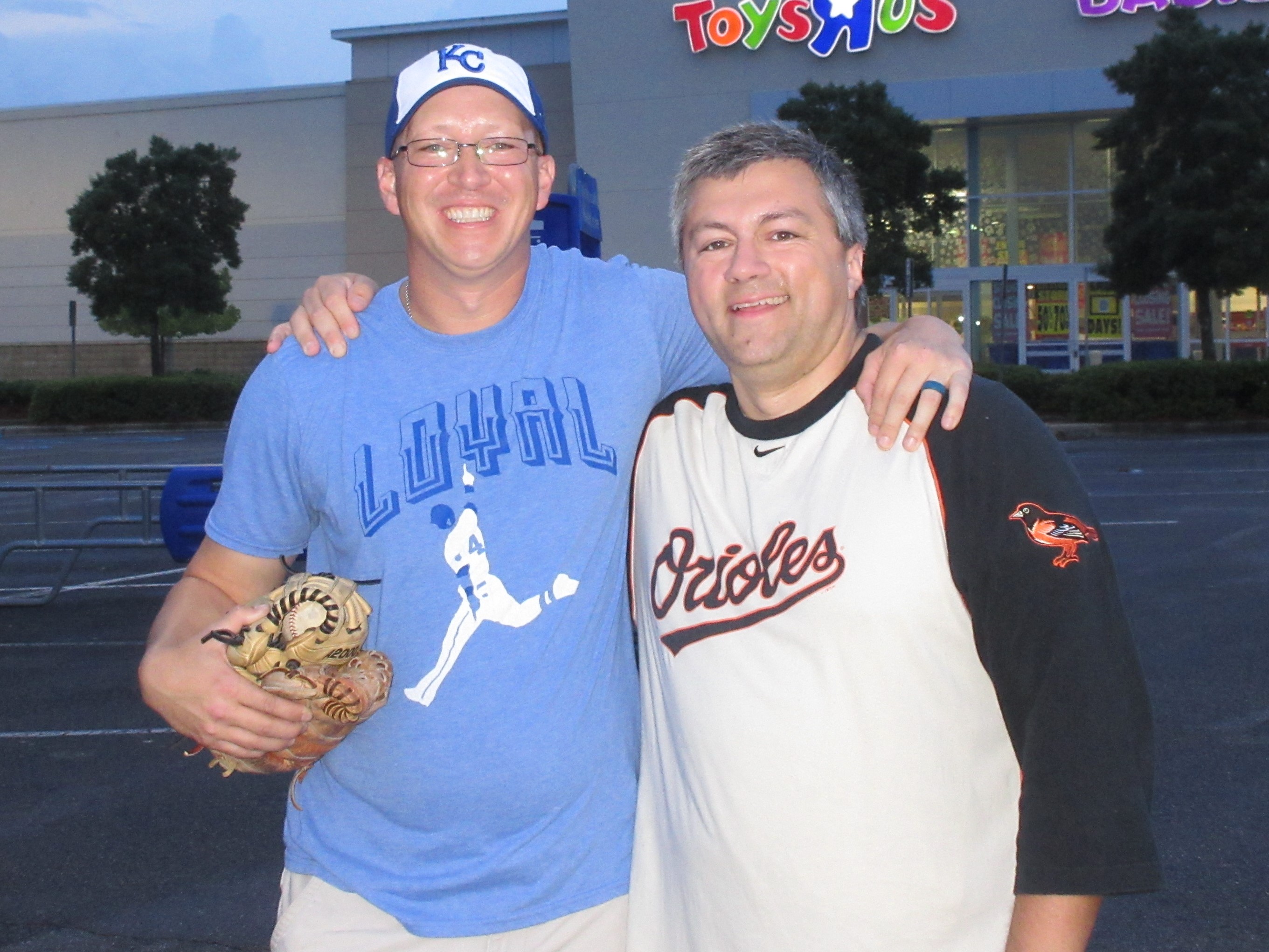 David knows all about the importance of play. He creates magic for families — planning and preparing trips to DisneyWorld, arranging fast passes, finding places to stay, and insider tips on meeting characters and best foods. (If you are even considering going to Disney or Universal or just the east coast in general, I would highly recommend contacting David: magiconadollar@gmail.com.)

I originally met David as part of an online community created by Jon Acuff. David’s gift that the majority of the world doesn’t know is creating epic music videos of encouragement, remembering the audacious dreams of friends from coast to coast and giving pats of the back at all hours of the day. David is also a movie buff and is working on his first book, “This is a Movie Book: Thoughts on My 500 Favorite Movies.”

“It’s a book about loving movies and stories from a lifetime of watching.”

His current favorite movie is You’ve Got Mail and Major League is at the top of his baseball movies, “though For Love of the Game” is an underrated gem.”

In the thick Alabama humidity, David greeted me with a hug that helped stretch out my tight back. He wore his Baltimore Orioles shirt in my honor, which brought back memories of the epic 2014 postseason. I refrained from making any comments as both teams are at the bottom of their respective divisions this year.

Over a fantastic pizza dinner, David gave us advice about preparing for our time at Universal Studios. Gourmet popsicles followed pizza, and then a twilight game of catch more than five years in the making.

In front of Toys R Us, David and I played catch which felt fantastic after 525 miles on the road. Kaylea and Sophie stretched their legs entertaining his son and it was a great end to the evening. Before the sun set, David’s son and southpaw wife also joined in on catch. 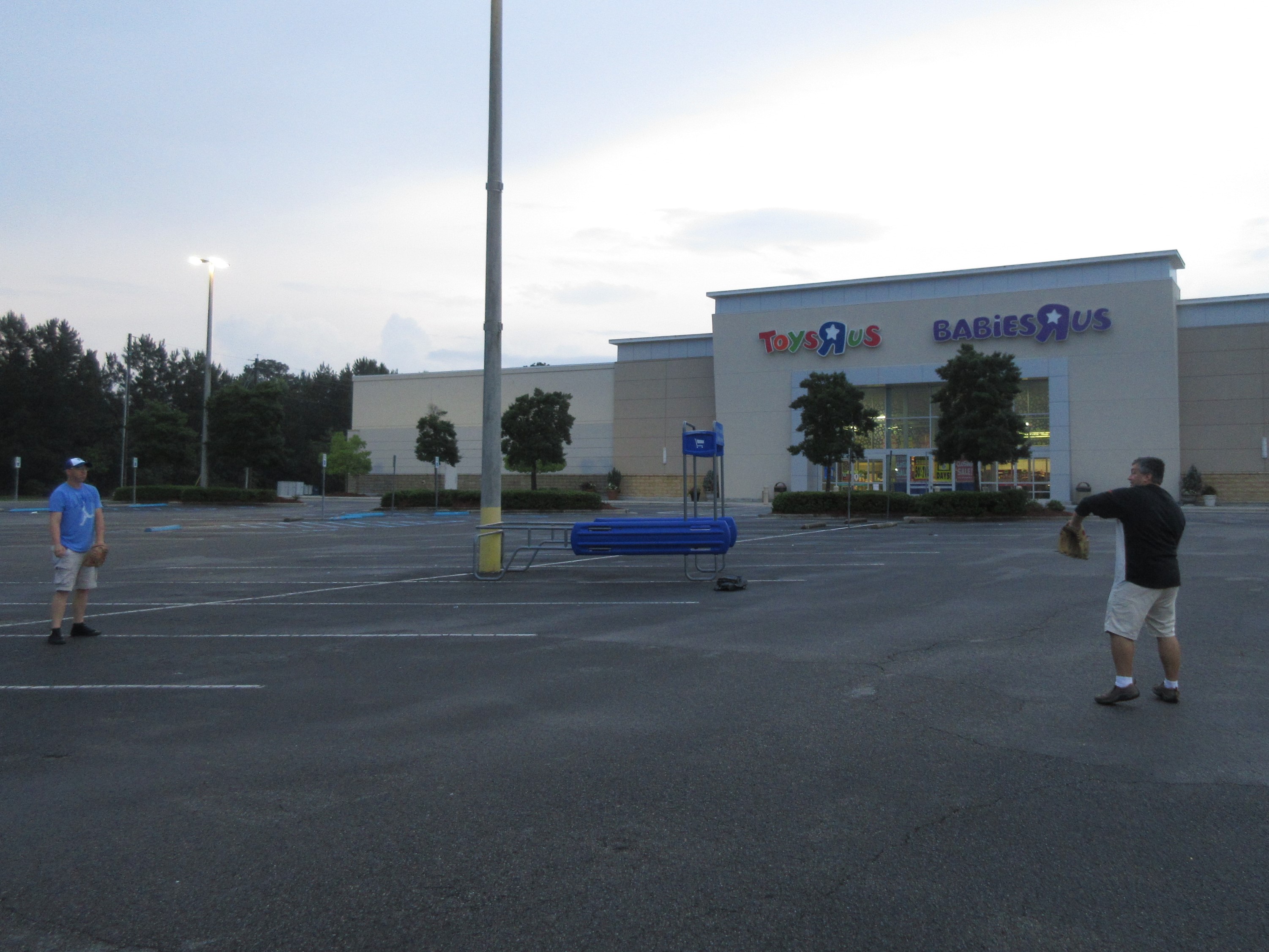 Jim, I hope your birthday was the best!

David, it was an honor to hear your stories in real life!

Congratulations to Jake (Day #33) on the birth of his second son today! 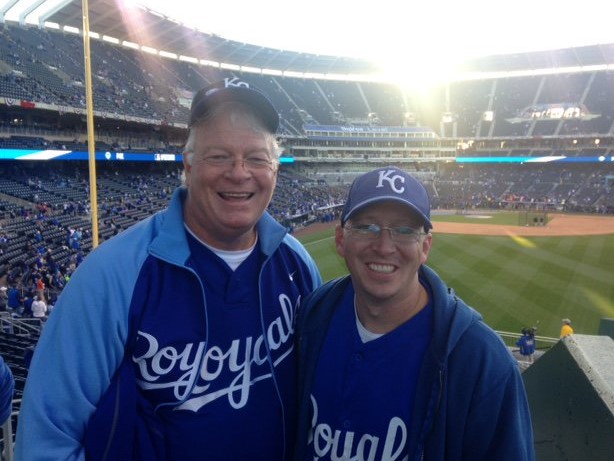