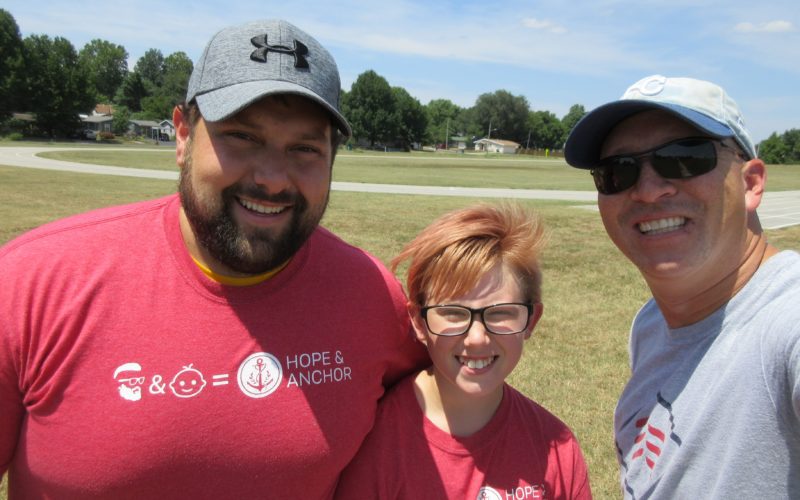 There was a Captain Springfield spotting at Westport Elementary. In partnership with several area organizations, my church provided volunteers for the Back to School celebration hosted at the school where Mom used to teach kindergarten. Captain Springfield was there as a representative of both Victory Mission and Single Momz Rock. I gave her a high five and didn’t do a very good job of keeping her secret identity a secret.

Sophie volunteered to help with face painting and bracelet making, crafting a baseball bracelet for me. It fits perfectly. I was stationed at the games section with a couple of friends where we corralled those playing cornhole, giant checkers, ladder / bolo golf, and a beanbag game. While waiting for the official start of the event, a few other volunteers and I played catch using the beanbags.

“Does this count as today’s game?” multiple people asked me.

I shook my head.

After two hours of game monitoring and thirty minutes of clean up, I was ready for the real game of catch with Hershel and Almost Dr. Wapp.

Hershel is a fifth-grader, a Royals fan, and played third base for the Regulators this summer. He likes to read the Goosebumps series and Harry Potter books and wants to be a journalist.

I’d love to encourage journalistic dreams, but I can’t begin to imagine what that important industry will look like in another 10 years. I’ve met enough reporters this year and commiserated about the struggles of print versus digital and the apparent decline in people who read as adults. Maybe the form of his dream job as a writer and reporter has yet to be invented.

We started out playing catch and Hershel used his glove, and then quickly switched to his dad’s glove. A few grounders and one pop-up (the sun was bright and Hershel forgot his hat) and lots of stories about his team.

Hershel’s dad, Almost Dr. Wapp (all-but-dissertation) joined us and took over when Hershel got tired. Almost Dr. Wapp is the principal in Conway, Missouri where they don’t have a football team and play fall baseball instead. He grew up in Beattie, Kansas, which explains his support for the blue Missouri team, and his dad coached his baseball teams for years.

“I don’t think he ever played baseball. We just needed a coach and he was willing to do it.” It reminded me of my own opportunity and invitation to coach. Almost Dr. Wapp played football at Evangel University before a couple of knee scopes ended his playing days.

“I still wanted to coach and didn’t want more surgeries.”

I made a quick comment about his Wilson glove that Hershel used.

“This is from my slow-pitch softball days.”

He then told the story of being in a rec league. His team’s opponent for the week took the friendly competition far too seriously, complete with stat-tracking and fancy uniforms and probably someone keeping pitch counts. So Almost Dr. Wapp’s team decided to get uniforms, too.

“We went to the thrift store and got cut-off dress pants and suspenders. And we won that week!”

His mantra as a principal is apropos to baseball and to writing and to life and reminded me of the advice Super Bo’s mom (Day #147) gave me a couple years ago.

“A short term memory is also necessary to do this job well,” he added.

But my favorite piece of wisdom Almost Dr. Wapp passed along originated with his dad.

“When you get hit below the belt, hold your elbow.”

I’m hoping I don’t have to apply that advice over the remaining 149 days.