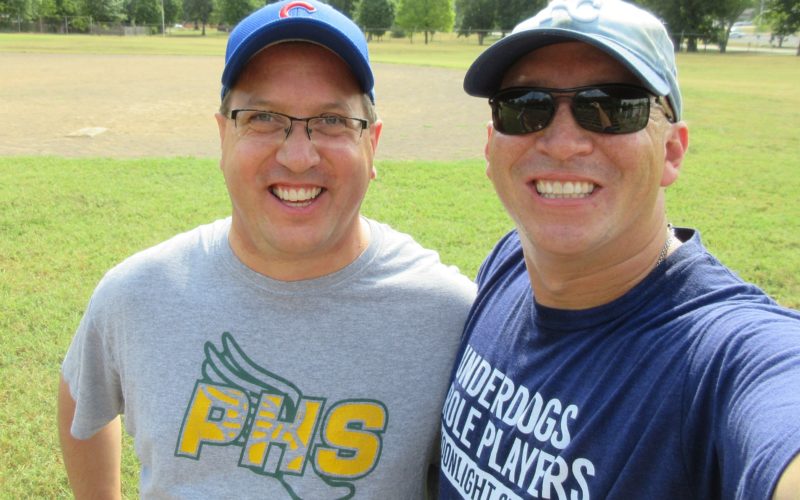 With the Cubs playing the Royals this week, Shane and Shaun (Day #153) offered a simple bet: If the Cubs win the series, I’ll play catch in a Cubs jersey and take a picture. If the Royals win, they play catch in Royals gear and send a picture my way.

Dad gave me simple advice when making a bet, “Always plan on losing.”

I have no problems playing catch in a Cubs jersey, especially since Ben Zobrist is on the team. Without Zobrist, the Royals probably wouldn’t have won the 2015 World Series.

My advice remains constant, “Icy Hot and ibuprofen, preferably chased down by a Dr Pepper.”

Jay met me at Fassnight Field wearing a Cubs hat. We were classmates at Kickapoo taking geometry and physics classes together and soccer teammates our freshman year. Jay now teaches geometry, physics, and leadership classes at the high school just across the street from the field. We are also bookends of the parenting spectrum — my oldest daughter is getting ready to start her senior year; his oldest daughter is getting ready to start kindergarten.

It’s a good thing we were playing catch, laughing and covered in sweat on this hot and humid morning, or else we might have been over-emotional talking about life and the ever-increasing speed of relational change.

Even in the age of instant information, sometimes news and events go unnoticed. Jay informed me of the passing of Mrs. Lisa Reece, our physics and chemistry teacher at Kickapoo. She made us laugh daily, joined in on the singing of James Brown’s “I Feel Good,” and taught me Newton’s Laws in an unforgettable manner. Just a few years ago, Mrs. Reece attended one of my storytelling events. After the storytelling, she came up to my book table and bought one copy of each of my books. She gave me a bear hug and whispered a prayer into my ear, “Jesus, thank you for Ethan and his courage to share joy and life through baseball stories.”

Thank you, Mrs. Reece, for early morning smiles and songs and showing how science impacts every day life.

After high school, Jay’s journey took him to the University of Colorado (where he was initially rejected, but it’s a great story because the school screwed up and actually makes a good case in favor of technological advances) and then off to Korea via the Army, where one of his superiors gave him incredible advice.

“Every deficiency you walk by, you’re setting a new standard.”

He’s carried that lesson with him for more than two decades.

His family joined us on the field, his oldest daughter sporting a Cubs hat and a Cardinals t-shirt, the obvious child of a mixed-baseball marriage.

When Jamie and I got married, I think it’s safe to say we were a mixed-baseball marriage. Her sister and dad were huge supporters of the Cardinals. I think it’s also safe to say, after 11 years living in KC and 21 years putting up with me, that she’s a Royals fan now.

Mixed-baseball marriages can make for fun bets, too. Like the friends I have who bet household chores depending on the outcome of the game. The most important thing Jay’s learned since high school is about his family.

“My job is inconsequential compared to my life and time with my family. I fully believe God’s sent me on mission to the high school, to work with students, but my family is my joy and priority.”