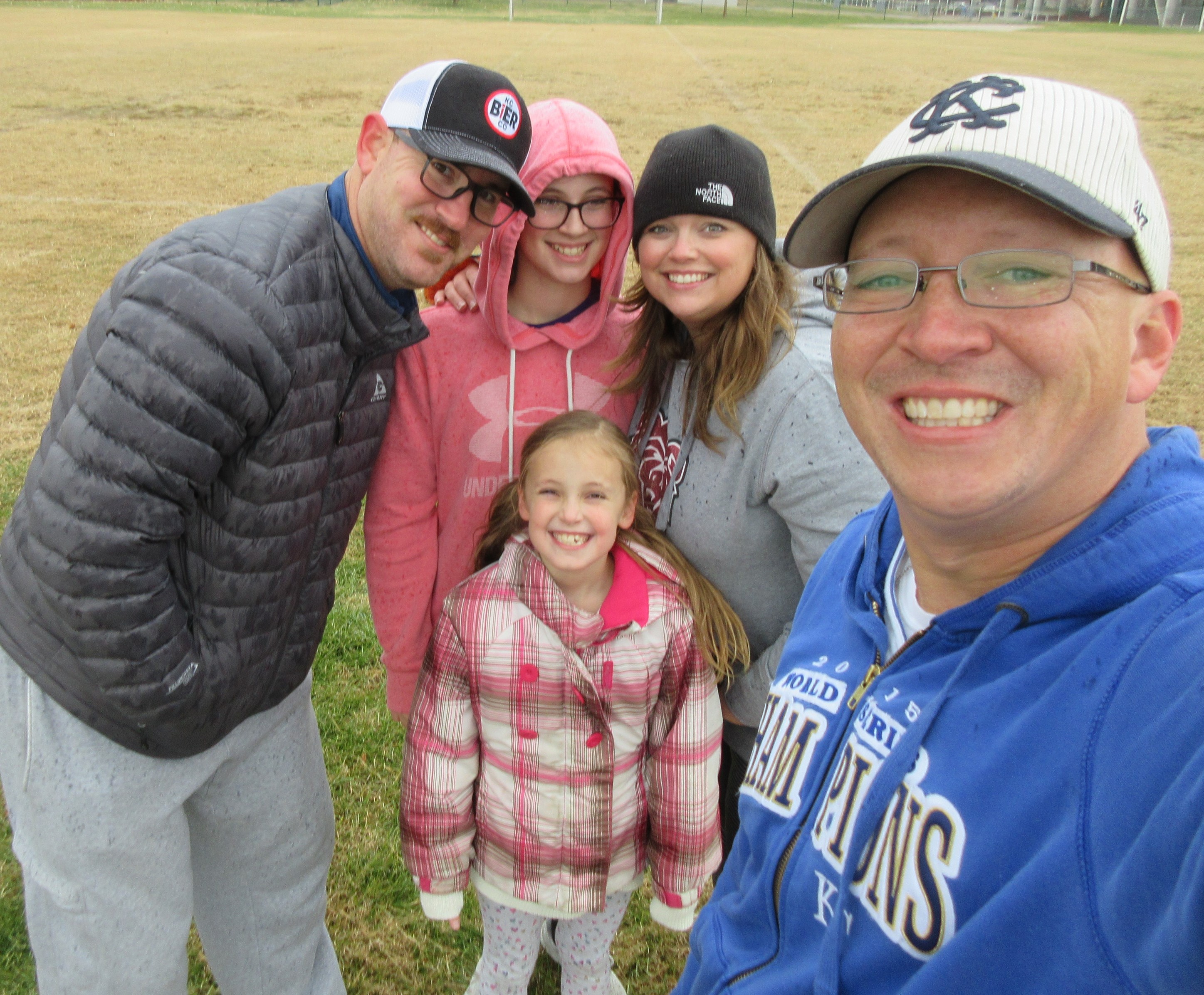 Jennifer is a Twitter friend who crafts under the name The Little Wing, inspired by the Jimi Hendrix song. Her handiwork raises money for pediatric cancer research in honor of her nephew who died from acute myeloid leukemia two years ago. She is in Springfield with her family to celebrate Thanksgiving, cheer on her husband (Chris) and daughter (Karsen) in the Turkey Trot, take a Hotel Vandivort selfie, and play catch.

The wind was audible, bending trees and blowing leaves and shaking the van on the drive to the MSU campus. Cold rain fell in spits and spurts. I was thankful not to be on the golf course today.

Campus was barren. Students and staff were long gone celebrating time off from the world of academia. I saw one car turn into campus, only to then make a u-turn and leave. A campus security car made two drive-bys. The security officer waved on his second pass.

Chris was the first to brave the weather. A southpaw who pitched for Aurora High School, he played catch with Karsen just a couple weeks ago before her softball tournament in KC. Chris is a Reds fan, thanks to the 1990 World Champion team, and has a great story of obtaining a Billy Hatcher autograph during spring training in 2016.

“He had been coaching third base, and I saw him walking on the other side of the fence. I called out to him and thanked him for his role in the 1990 World Series, and then he tossed a ball over the fence. I yelled back and asked for an autograph…he signed it and threw it back.”

Karsen decided not to wear a coat for catch and joined us. She’s also a pitcher and plays second base. She bested her dad in the Turkey Trot by 30 seconds and acquired Joey Votto’s autograph when the Reds visited the Royals this summer. She was quick to remind me that the Reds swept the two-game series.

Chris threw splitters and cut fastballs and forkballs that had ridiculous movement. Karsen threw a “heavy” softball that exceeded the pocket of the old Wilson and stung, so I changed gloves. Jennifer took pictures and Owynne ran around the field and explored the soccer goals.

And then we all convinced Jennifer to play catch.

“I haven’t used a glove since I was 8 years old and picking dandelions in right field during my only softball season.”

She borrowed the George Brett glove, but after a dozen throws the rain returned in earnest.

After a quick selfie, the Little Wings went off in search of cashew chicken and I was looking for somewhere to warm up my hands.

I am thankful for internet friends who create space to connect in real life.

Especially for a game of catch, even in less than ideal weather.