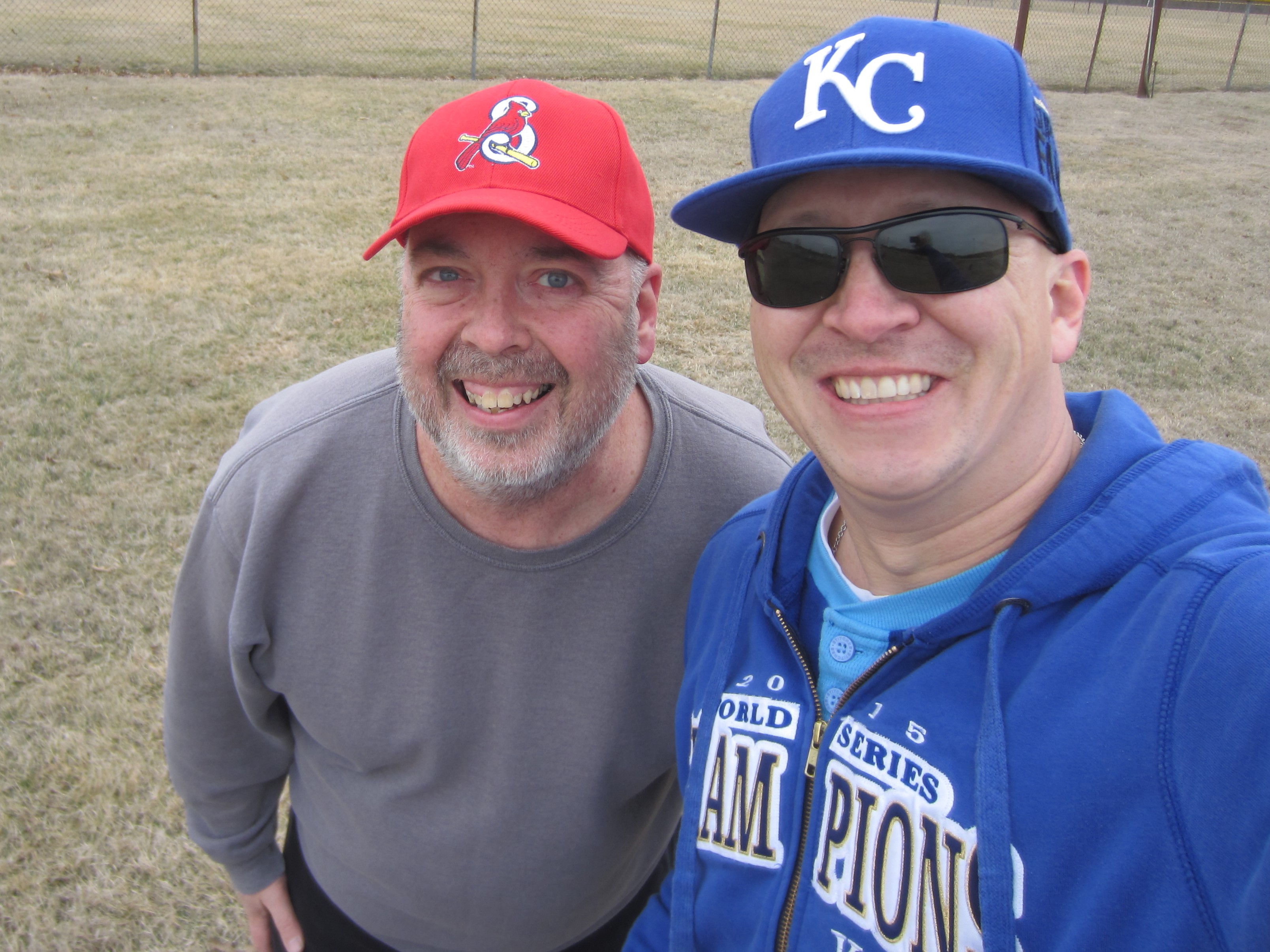 I think I am one of the biggest supporters of the batting cages at Fun Acre in Springfield. I’ve even written a poem about the not-so-hidden treasure (posted below). Depositing quarters in those red boxes to take five swings is some of the best therapy I’ve ever had. Roger even used to let me use his bat until it was stolen a couple years ago. Today, I played catch with someone who not only loves baseball as much as I do, but also loves Fun Acre, too.

Everyone in Springfield knows Don’s voice from the radio, particularly during stormy weather. Don and I first connected on Jeni’s radio program about Superfans where he was introduced to me as the biggest Cardinals Superfan in Springfield. I was introduced to him as a Royals Superfan. I made sure to wear the hat Sungwoo gave me to confirm it. It made sense, then, on the day that pitchers and catchers reported to Spring Training, Don and I would be playing catch.

We met at Ewing Park on a day that did not live up to its forecasted expectations. No sun. No 50 degrees. But the storytelling was excellent. While we tossed the ball Don told me the epic tale of setting the mini-golf record at Fun Acre.

He used a putter Roger sold him for only $10 and always uses a red golf ball.

“For the Cardinals, of course.”

I understood. I always use one of the blue golf balls in perpetual support of the Royals.

“Six holes-in-one that day,” Don said and I laughed and celebrated his accomplishment, “but my record’s actually seven.” I think the most I’ve ever had in one round was two.

After ten minutes of tossing and talking and after the selfie and after complimenting my flip phone, Don started scrolling through the camera roll on his smart phone.

The Royals had just defeated Toronto to return to the World Series. Champagne was being sprayed everywhere in the clubhouse; players were whooping and hollering and celebrating. And Don was in the middle of all of it.

Before we left, Don and I agreed to meet for a round at Fun Acre. I’m certain we’ll both wear our Superfan colors, too. After he beats me on the mini golf course, I’ll invite him to join me in the cages.

Thanks, Don, for the stories and laissez les baseball roulez!

I waited at the railroad crossing

but didn’t count any cars

I took a ride on the loop-di-loop

not wearing any lap bars

The red rocket took me for a trip

careening here and there

I passed through the dinosaur shadow

who watched without a care

The goldfish pond gave me a bath

its water clean and cool

The bowling pins distracted me

A giant tortoise sauntered near

I posed near la tour Eiffel

I hopped straight through the frog legs

out the tail of the croc

the windmill made a passing swing

but didn’t stop my shot

and when I’m done, I grab my bat