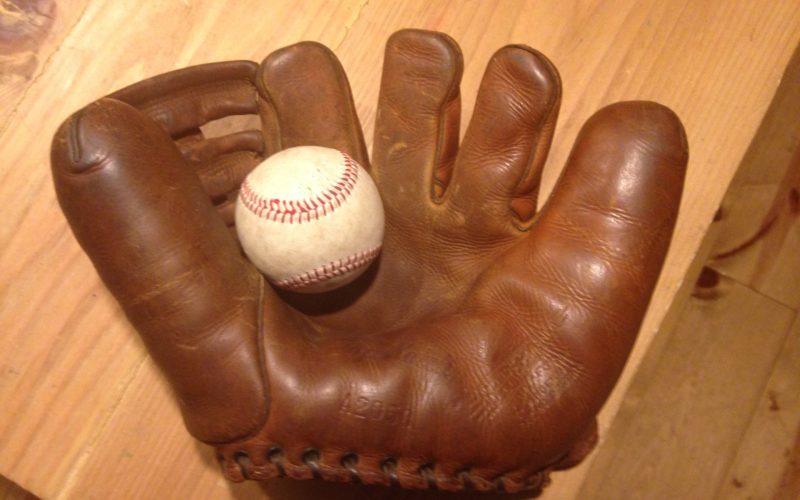 Byron Borger of Hearts & Minds Books recently sent me a new book, One Long River of Song: Notes on Wonder, by Brian Doyle.** I’m reading it slowly, enjoying the way Doyle structures sentences and thoughts and tells his stories. He uses a lot of commas and a lot of “ands” and it really is a thought-provoking read. There’s even a footnote warning the reader that one of the sentences in a particular story is 379 words long. I was surprised to discover a baseball story in the early chapters. In an essay titled, “Catch,” Doyle writes,

Because I had never played before, my father pointed out to me that being generally unsure of baseball’s regulations and what he called the rhythm and geometry of the game was a substantive drawback, and he offered to have catch, so that I could understand the basic transaction of the sport, as he said, which is the exchange of the ball…

I thought that distinctive phrase — “have a catch” — had a singular origin. Field of Dreams. Both Kevin Costner and Dwier Brown tried to get that line changed, as the story goes, as they each grew up saying, “Wanna play catch?” On the east coast, however, there are multiple reports of people saying, “Have a catch.” Doyle himself was born in New York. I guess a having-a-catch tour of New England needs to be added to my bucket list. I’ve already received approval from the Red Sox for a game in front of the Green Monster.

A few weeks ago, I approached my friend Aaron about writing a catch-playing song based on the book. Aaron plays the keys and sings in a silky smooth tenor voice. His first CD project, Courageous, played multiple times when my family drove to Florida in 2018. The title track from that project is one of my favorite songs. He started piecing together phrases and melodies almost immediately.

Aaron sent me a scratch track of his idea. In the chorus he sings,

Go have a catch

Grab a ball and a glove

To toss back and forth

My heart beats with hope

When you catch and I throw

I listened to it a couple more times. And then it clicked. Of course, it’s have a catch. Dad and I went to the Field of Dreams movie site, after all.

Aaron came to Springfield and we took a day trip to the Negro Leagues Baseball Museum and ate KC BBQ and reflected on life. Before he returned to Florida, Kaylea and I got the opportunity to lay down tracks for the song.

In a year when almost nothing has been “normal,” there’s still sacred space for a game of catch.

Or, as Aaron writes,

It’s more than a game, and more like a friend.

It’s always there when no one else is.

Sometimes I feel God when I’m out there…

And now, the Catch 365 tribute video and debut of Having a Catch.

Lyrics, keys, vocals, and pretty much every other instrument: Aaron Unthank.