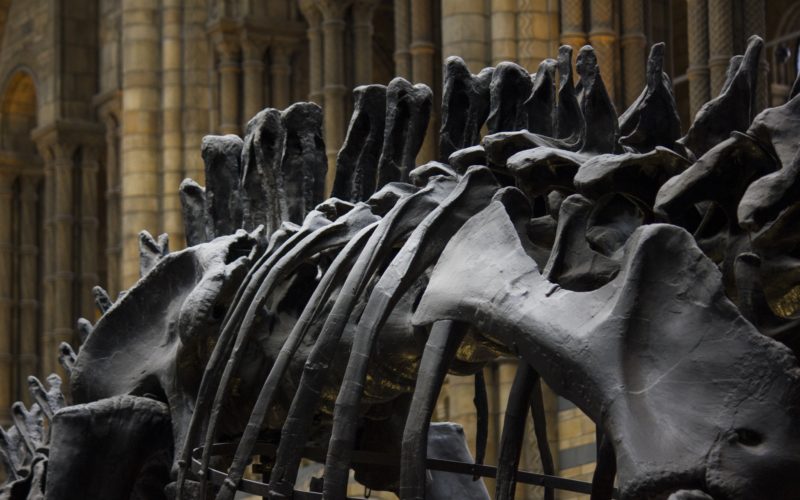 Just to be the one who drives a thousand miles

To knock on adventure’s door

Inspired by my adapted version of The Proclaimers’ hit, I figured 500 miles was a good day’s drive, though Fagan and I didn’t quite make it that far on the first day. I got distracted in Hays, Kansas.

I found a Dairy Queen and grabbed a dipped cone for me and some water for Fagan, then leashed Fagan so both of us could stretch our legs. Fifteen minutes later, I was standing in front of the Sternberg Museum of Natural History and knew I needed to eagerly reach out to experience it.

I walked into the domed building and was immediately face-to-boney-face with some kind of massive dinosaur hanging from the ceiling. I jumped and cussed loudly, which echoed in the sizeable lobby. Fagan growled, as he should, and passed underneath with his hackles raised. Dad would have loved the fossilized greeter.

I spotted an alligator snapping turtle and an alligator gar in aquariums as I made my way to the admissions counter, where I only slightly lied to the young man at the admissions desk, claiming Fagan as my personal emotional support dog. He didn’t ask any questions, and I was ridiculously grateful.

Walking behind the counter and up the stairs, I was drawn to all the sharks floating in space, making it feel like I was underwater in the ocean, one of my least favorite places to be on the planet. Fear and imagination have a heyday when it comes to life underwater. I tried to take a selfie with Fagan next to the massive jaws of a Megalodon, which only served to reinforce my fear of swimming in the ocean.

I spent significant time appreciating and studying the “Art and the Animal” exhibit and made notes to enter a submission for next year.

The animatronic T-Rex that roared and moved gave Fagan fits. I don’t know what chances a 60-pound dog has against a nine-ton beast, but Fagan was convinced he could put the T-Rex in his place. I found the famous “Fish-Within-A-Fish” fossil and knew Dad would have delighted in this entire museum. I made an anonymous $200 donation in Dad’s honor on the way out. Riches aren’t always measured monetarily.

I sent a video of Fagan protecting me from the T-Rex to Nick.

“The only question that T-Rex is asking is whether to use barbecue sauce or ranch as a dipping sauce.”

“I just told Fagan what you said. I didn’t know it was possible to offend a dog, but he said he’s no longer talking to you.”

“Tell Fagan to keep you safe on your travels, and I’ll find some way to make it up to him.”

“Mountains are only a problem

when they are bigger than you.

You should develop yourself so much

that you become bigger than the mountains you face.”

It was a last-minute decision to head to Loveland Pass. Since it was west of where I started, I considered it progress.

Loveland Pass is 11,990 feet above sea level and sits on the Continental Divide. At some point during the ascent, due to the reduced atmospheric pressure, a bag of chips in the back seat exploded. I was not thinking anything about atmospheric pressure as I slowly navigated the ridiculously steep grade with white-knuckled, breath-holding hairpin turns. When the Nacho Cheese Doritos popped and hit the ceiling, I screamed, hit the brakes, and peed my pants.

Fagan barked and then jumped over the seat and had a tasty snack of considerable size.

I could hear Dad laughing.

I stopped at Loveland Pass because I needed a break and I needed to change clothes and Fagan deserved the opportunity to pee on both halves of the United States in one go. Once I gathered my wits and could flex my fingers, I took in the scenery and was stunned.

For the next six hours, I visited with strangers from fourteen different states and three countries. Fagan became the official greeter of Loveland Pass that day and as the sun set, with orange and red streaked clouds above, I finally witnessed “purple mountain majesty.” I took about a hundred pictures to serve as models for future painting projects.

As I sat and slowly rubbed Fagan’s ears, I remembered a prayer in the Bible. It took me a few minutes to find it, but I read it to Fagan before we headed down the mountain.

I lift up my eyes to the mountains—
where does my help come from?
My help comes from the Lord,
the Maker of heaven and earth.

The Lord watches over you—
the Lord is your shade at your right hand;
the sun will not harm you by day,
nor the moon by night.

I’m trusting God will answer this prayer, keeping watch over me no matter where I go. I got back into the car and just drove, my entire body rejuvenated. We hit the city limits of Grand Junction, found a Days Inn, and I fell asleep before I could peel back the covers on the bed, Fagan right at my side.

“One way to get the most out of life

is to look upon it as an adventure.”

Upon leaving Grand Junction, I started listening to James Patterson’s book Juror #3. Only eight hours long, I committed to driving until it was finished, which landed us in Twin Falls, Idaho for the night.

I asked the attendant at the gas station if there was anything I needed to see while I was in the area.

I took her suggestion seriously and figured I’d best check it out. Who knows when I’ll be back this way again?

With my luck and Dad’s sense of humor, I’ll be passing through on a return trip from Florida. Or New York. Or the moon.