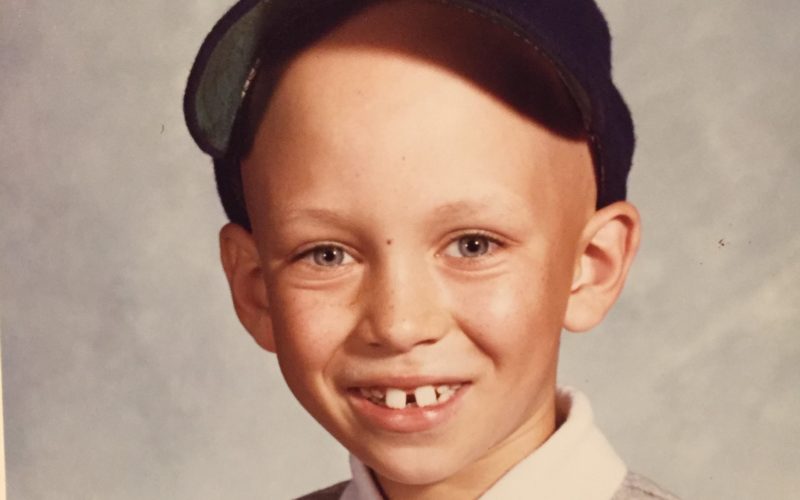 September is Alopecia Awareness Month. Below is a part of my alopecia story, as told in A Year of Playing Catch.

After living in Grand Junction, Colorado, for one year, just thirty miles from the Utah border with views of the Book Cliffs mountain range at the end of the street, my family moved to Springfield, Missouri. In the days of blue laws, Dad started his own business as a veterinarian making house calls, and Mom stayed at home with me and my sister. That fall, I enrolled in Delaware Elementary School as a second-grade student.

When I was six years old, all of my hair fell out. Patches on my pillow as I slept and in the bathtub when I bathed. Mom and I visited several doctors, who continued to state the obvious: “Your hair is falling out.” My condition was diagnosed as alopecia areata, and to this day, I wake up with perfect hair. But I was the only bald kid at Delaware.

I’m pretty sure the rule was “No hats in school.” No one told me directly, so I wore a navy baseball cap almost every day, including picture day. The portable photo studio was set up on the back of the wood-floor stage. The goldenrod curtains were pulled closed with PE classes taking place on the other side. Thirty-four years later, I stood on the same stage in front of the curtain as part of a book launch, giving every student and teacher in the building a copy of my first picture book, Superheroes Are for Real.

Back in second grade, I sat down between the camera and the neutral background with my cap pulled down tight just over my eyes. The photographer asked if I’d like to take the cap off for my picture. Then when I started to take it off, he suggested I leave it on. He probably didn’t have any  makeup to apply to my super shiny head, although he did ask me to tip the bill up to reduce the shadow covering my face. That picture can be seen every Christmas on an ornament Grandmon created for me.

At the end of second grade, I was invited to play on my first baseball team—a Chuck E. Cheese–sponsored, Kiwanis League team. On this team, everyone learned about the various positions and tried on all the equipment, which was the perfect recipe for a lice outbreak. When Coach called Mom to tell her the news, she replied, “I knew there would come a day I would be thankful God made Ethan bald.” Coach was embarrassed, but it was a sign I had been accepted as a ballplayer.

You can order your copy of A Year of Playing Catch here.

If you’d like an autographed copy, please email: hello@ethanbryan.com.