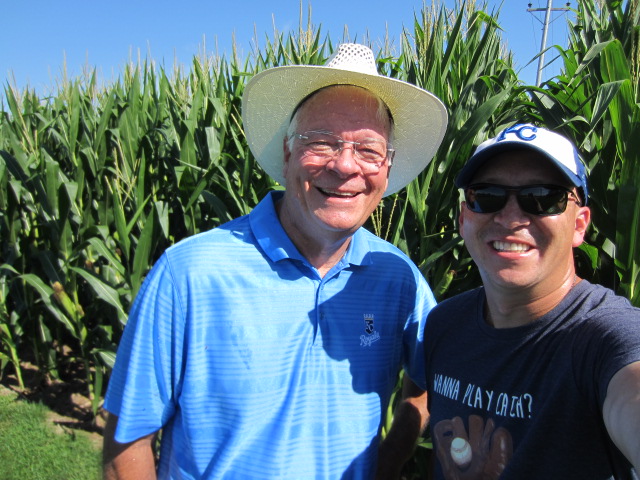 I rode on his shoulders as he ran laps around the indoor gym at the University of Missouri. It’s one of my earliest memories. He was getting exercise, taking a break from working on a degree in Veterinary Medicine. I was the tallest person in the building, high-fiving basketball players as we ran past, bouncing and laughing.

He taught me how to catch popups on an all-dirt infield near a chain-link fence backstop on a day that was so, so hot. “Use two hands,” he said a hundred times that day. The field’s been covered over, replaced by grass and a walking trail.

He taught me how to drive a stick shift on my first car, a 1988 Mazda 323 two-door hatchback. The car was blue, which was cool, and a four-speed, which was not.

Before I learned how to drive a stick, he taught me all about driving on ice. We practiced in a puke green from-sometime-in-the-1970s Pontiac Catalina in the church parking lot across the street from our house. It was named the Starship Enterprise.

Over the years, we rode almost all the roller coasters at Silver Dollar City, Disney World, and Cedar Point. Our first time on Demon Drop at Cedar Point, he screamed loud enough for half of Ohio to hear him. Our first time on Wildfire at Silver Dollar City, he hid his cell phone in his hand and called his mom so she could listen in as we rode. Wildfire has five inversions. Five different times one’s feet are above one’s head. During these five occurrences, Dad audibly cussed. He apologized to his mom at the end of the ride. “Sounds like you boys had a lot of fun on that ride,” she said.

He bought me baseball cards of my favorite players and took me to play golf while my sister went shopping or got haircuts with Mom. My wife and I witnessed his first hole-in-one, the only hole-in-one either of us have had, less than a month after Jamie and I got married.

He caddied for me once. After I graduated high school, I played in a local one-day tournament at a golf course where I once shot even par to win the high school conference tournament. My self-confidence and ego were quite healthy heading into the event. But the course was set up extremely hard that day, tees at the tips and pins in tricky positions. It took only three holes to humble me. Walking to the fourth tee, I was four over par.

Then he met me on the fourth tee. He picked up my bag, gave me a quick pep talk, and I was two over for the rest of the day, carding a respectable 78.

When Jamie and I moved to Texas, he encouraged me to take the first shift driving the moving truck pulling the car on a trailer. I got the trailer jackknifed at a much-too-small gas station at our first stop. He helped me straighten it out and get back on the road. 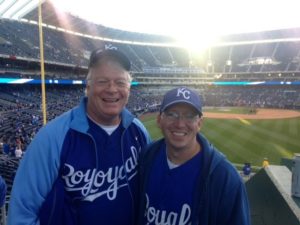 In 2014, we stood in the upper deck of Kauffman Stadium, cheering on the Royals as they swept the Orioles on their way to their first World Series in 29 years. He bought souvenir shirts for his granddaughters before we left the stadium.

Two years ago, we traveled to the Field of Dreams movie site and played catch among the cornstalks. It was an unforgettable day spending time together at that baseball sanctuary. We laughed and listened to the silence and made new friends with people from all over the country. He threw me a popup as we concluded our game.

I caught it, of course, with two hands.