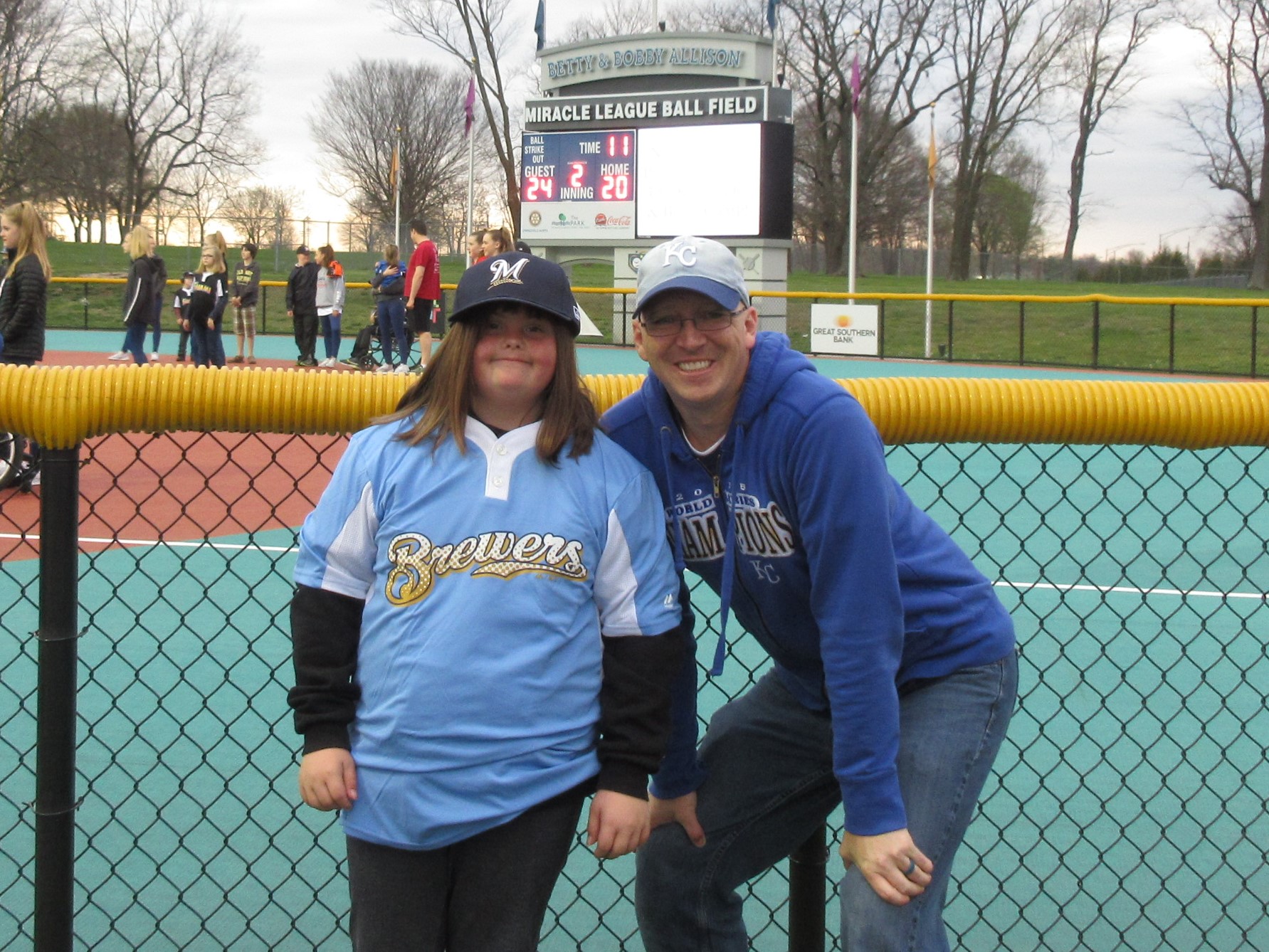 The bleachers were packed with fans who cheered every single at bat. The field was full of players, each with their buddy, some with two. There was a southpaw on the mound tonight, tossing pitches with a good arc, throwing grounders to various players after every hit.

I got to the field shortly after Game #1 started featuring the Marlins and the Dodgers. Cyrus, the commissioner for the league, was doing his best to announce each player as they stepped up to the plate, but the sound system finally died. A voice can only last so long.**

One player walked up to the plate and asked for the ball to be set on a tee. He started counting down from 10 and the crowd joined in. When he reached 1, he swung and everyone cheered. I saw high fives and one of Jamie’s students and one dramatic slide across the plate followed by Cyrus’s call of “Safe!”

Shari, who has been with Miracle League in Springfield from the beginning, introduced me to Ashlynn, a multi-sport 12-year old who is playing in her fourth season.

Before coming to tonight’s game, Ashlynn had a track meet, competing in shot put, the 100-meter dash, and throwing the javelin. She won a gold and two silver medals.

“She could play catch all day,” Ashlynn’s mom said.

I told Ashlynn to let me know if she was tired, I didn’t want to wear her out before her game. I know my arm would’ve been tired after competing in the shot put, not to mention throwing the javelin as well. Back and forth we tossed the ball and watched almost the entire second inning of the first game. We took a quick picture in front of the field as one of the final hitters stepped up to the plate. As the Marlins and Dodgers gathered around the mound and sang, “Take Me Out to the Ballgame,” Ashlynn gathered with her teammates.

Wearing Milwaukee Brewers blue, Ashlynn’s team took the field first, and she positioned herself at first base. She gave me a quick high five and pointed me out to her buddies. In between hitters, she practiced fielding grounders from the pitcher.

Ashlynn was the final hitter for the Brewers in the bottom of the first. Carrying a baby blue bat, she swung and missed the first two pitches. On the third, however, she hit a blistering line drive that carried over all the players and hit the fence.

I know the NW Arkansas Naturals are in town, the AA team of the Royals, and I’m hoping to connect with them at some point over the next couple of days. But watching the games at Miracle League tonight, listening to the encouragement and support of the community, seeing the joy on the faces of the players, these were by far the best games in town tonight.

**Anyone with connections to a sound system and speakers?