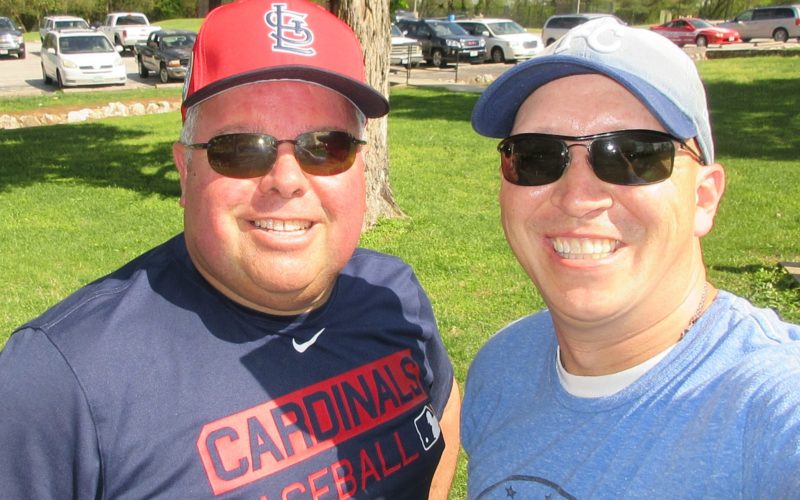 Ken was born with little choice but to love baseball.

He brought along his family to Doling Park — daughter, son-in-law, and a half-dozen grandchildren. Everyone was decked out in Cardinal red; almost everyone had a glove.

When he was 5, his parents took him to a game at Sportsman’s Park. Unfortunately, the game was rained out; no baseball was played that day. But Ken ran into Stan Musial at the stadium.

“Are you going to be a baseball player when you grow up?” Musial asked.

This past winter, Ken went to Florida on an epic Spring Training trip — 9 stadiums in 6 days.

“We couldn’t make it to four stadiums, but it was such a great trip.”

I told him of my one Spring Training experience, a trip with my friend Mark to Arizona in 2012, just weeks before we moved back to Springfield.

“You might be interested in a documentary about the origins of Spring Training — First Boys of Spring,” Ken said.

I couldn’t help but smile. “Yeah, I’m a pretty big fan of that one. I was an extra in it. I played third base for the Red Sox in a game filmed at Lamar Porter Field.”

This summer, he and his wife are planning a trip to Fenway and Cooperstown. I was able to cross Cooperstown off my bucket list last year thanks to America at the Seams. Fenway’s near the top of my baseball park bucket list. I’d love to watch the Royals play there, maybe from the top of the Green Monster.

On the first day of the year that my white legs made a jeans-less appearance, I started by playing catch with Ken, then switched to granddaughter EJ, then to Wyatt, then to Willem, then back to EJ.

I know this will sound crazy, but the longer this catch-playing project goes, the harder it is to actually stop playing catch. I love watching the different ways people throw and catch. I love watching the spin on the seams and how simply tossing a ball connects random synapses in the brain and stories just flow naturally. I love meeting new people and how this “children’s game” is not just a red-thread throughout our nation’s history, but ties together lives of strangers becoming friends.