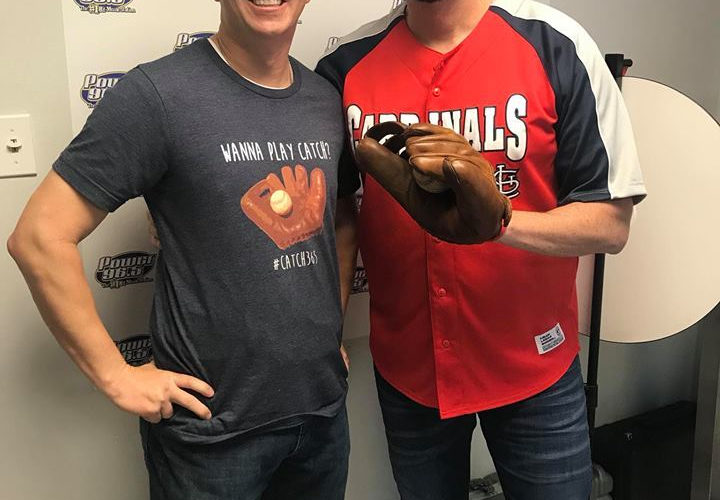 Fotsch warned me about the game yesterday.

He said not to let it affect my sleep.

But I didn’t have a Royals game last night to distract me. Getting to the radio studio on time meant waking up an hour earlier than usual and as soon as I woke up I had echoes of a dream playing in my brain of Fotsch asking me the question on air, “Why?”

Dream me was speechless and covered in sweat.

I first met Fotsch about five years ago at a Springfield Cardinals game. The Northwest Arkansas Naturals (AA affiliate of the Royals) were in town and I had two tickets to the game. Jamie and I took a rare school-night-date-night and went to the game for a few innings, sitting directly behind the Naturals dugout, decked out in all blue.

The Naturals scored early and I celebrated loudly. Fotsch sat across the aisle, ready to take the field in between innings as the emcee, and jeered me.

He did get me to quiet down a little when he said, “I’ll make you play a game on the field.”

I am an introvert. I embarrass myself enough as it is on my own. I have no interest in public humiliation.

Jamie and I had committed to leave after the fifth inning to get home for bedtime routines. In the bottom of the fifth, the Cardinals rallied to take the lead. They would go on to win the game. Of course, Fotsch spotted us leaving and commented quite loudly.

It was quite hilarious. I even laughed at myself as we left.

I asked Fotsch to play catch because I think there’s something cool about fans of opposing teams tossing the ball. Baseball brings people together. When he asked me to be on his morning radio and TV show with Sarah, I agreed wholeheartedly.

So while I tried to fall asleep last night, I remembered the story Joe Posnanski wrote about Buck O’Neil and his appearance on a shock-jock radio station in New York City.

Sarah greeted me with a smile and handshake and walked me back to the studio and I tried to act cool but I felt like my 7th-grade nerd self. And then I got the slightly overwhelming introduction to the TV cameras and when to wear headsets for radio and always talk right into the mic and standing looks better on TV and I wondered how it was possible that they couldn’t hear my heart trying to escape from my chest.

I began to breathe when we started talking about baseball and meeting at the stadium and Fotsch’s fiancée Emily who is also a Royals fan.

And then it came time for the game.

Taylor Swift’s “Shake It Off.”

I can only hope my daughters weren’t listening.

So I swung for the fences and even danced a little bit and it was horrible. Taylor Swift and I do not share vocal ranges. But it was nothing like the worst-cases I imagined. I even had a little fun doing it.

And then we played catch in the studio, dodging lights and microphones and mixers and I was finally able to relax.

I loved hearing that Fotsch and Emily play catch regularly; I think playing catch is a great way to process a day and a good way to build a life together even if you cheer for opposing teams. I also loved hearing the story of his 7th grade home run blast against a trash-talking pitcher.

“I haven’t thought of that story in years,” he said.

After the show was over, when no cameras were on, I asked Sarah to put on a glove and she, too, tossed the ball with me while Fotsch prepared the promo for their American Idol-ist guest tomorrow.

I still don’t have a short, sound-byte answer to the “Why?” question. I still need thirty minutes to tell stories about playing catch instead of a direct answer. I do know that if someone else made a resolution to play catch every day of 2018 and I found out about it, I would do everything possible to connect with that person.

The same day that Buck was ambushed by the shock-jock in NYC turned out to be the same day of the woman in the red dress.

Sarah, Read the linked story above about Buck O’Neil and the woman in the red dress. You’ll love it.

Fotsch, Next time I’m bringing my guitar and singing my award-winning Royals song. Then we can chase down fly balls in the outfield at Hammons and play some long toss.

“Baseball is more than just a game,” Fotsch said several times this morning.