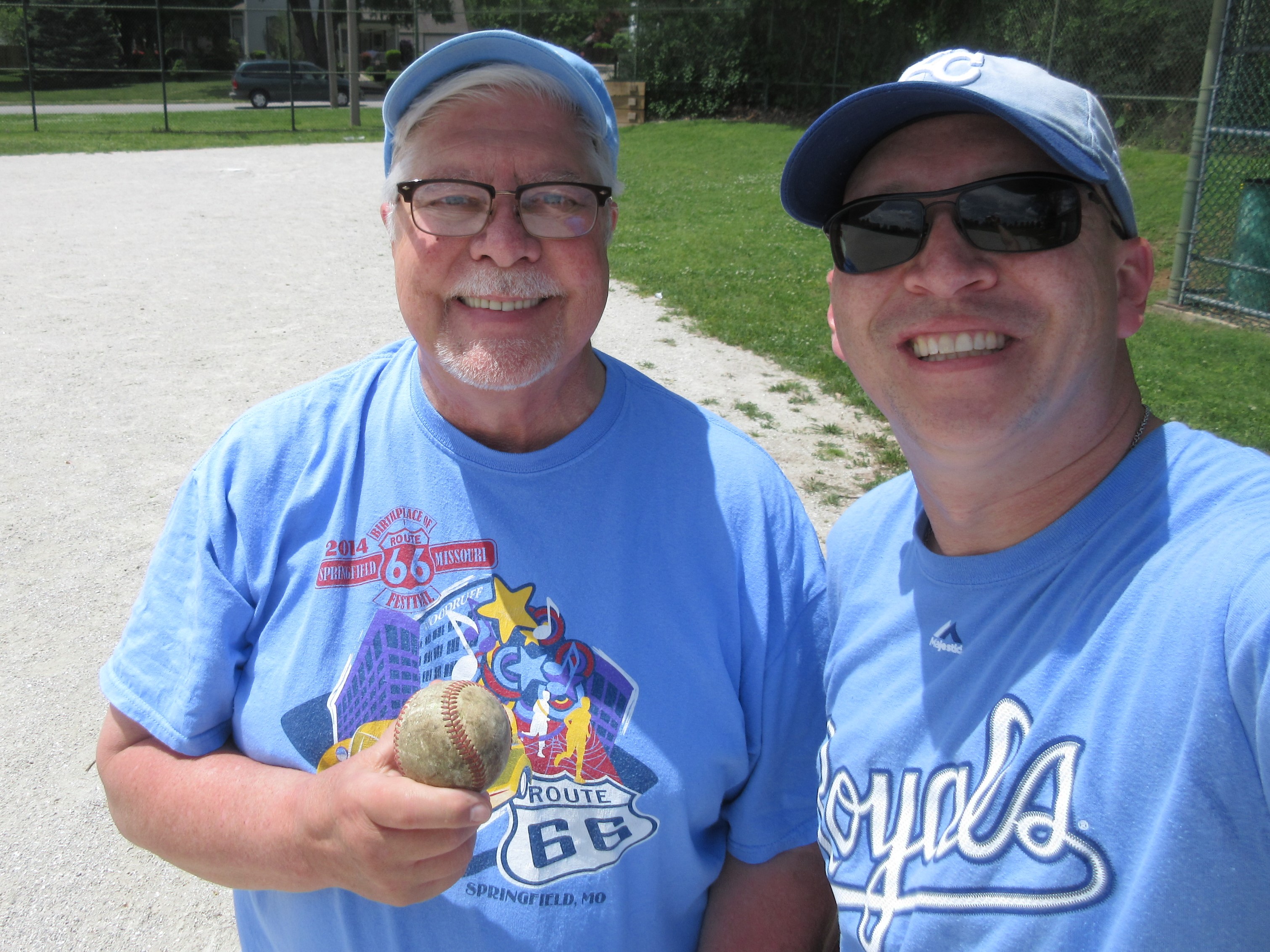 “It wasn’t that long ago, really. And then multiple people commented, ‘Do you know Ethan?’”

And so began our conversation about finding a time to play catch which turned out to be this afternoon, right after playing golf and lunch with Dad. I might have peaked early and played my best round of the year — eight pars and a bogey. I’m not complaining. I’m still kinda shocked, honestly.

Bob told me he’d be using his Wilson model Bobby Bonds signature glove, so I took my 1940s Wilson, looking forward to the distinct sounds it makes when the ball hits the palm-pocket.

“Over the last couple of years, I’ve played catch a little bit with the grandkids. I quit playing softball at 42; any serious game has been at least a decade. Even so, when I’m driving past a ball field and the lights are on and the dust is hanging over it, my car keeps trying to turn in!”

I know full well that feeling. Whenever I drive to my parents’ house, I always look at the scoreboard and lights at Kickapoo to see if a game is being played. One of these days, I’d like to get back on that field and chase down some fly balls.

For five years, Bob was the mayor of Springfield.

“If people go into a situation with a positive and willing attitude, you can get things to work out. There aren’t a lot of problems that can’t be solved if people work together and keep their egos out of it.”

Bob’s advice sounds applicable to more than just city council disputes or whatever it is mayors argue about. My Papaw was mayor in East Prairie, Missouri. I remember seeing newspaper clippings and other mayoral memorabilia in his office at his store. I have no desire to run for mayor or any sort of political public office. Unless there’s a need for an ambassador of catch playing.

As mayor, Bob was invited to throw out the first pitch before a Springfield Cardinals game.

“I one-hopped it. I couldn’t believe it. My cell phone started buzzing in my pocket before I even got off the mound. If you ever get the chance, be sure you practice.”

I told him the story about last week when I received congratulations on Twitter for throwing out a first pitch — while I was at Kaylea’s symphony performance.

“Rule number one of politics,” Bob said, “If someone wants to give you credit for doing something good, even if you didn’t do it, take it.”

Bob grew up just a couple blocks from the field where we played catch, the field which sat immediately north of the parallel parking cones where a red Volvo practiced the entire time we were together.

“I admire their persistence!”

Bob grew up playing ball with the neighborhood boys, dreaming dreams of being a professional ballplayer.

“Home plate was in my backyard.”

His team, surprisingly, was the Milwaukee Braves.

“I loved Del Crandall, the catcher, and Lou Burdette and Warran Spahn and Hank Aaron and Eddie Mathews. When Milwaukee moved to Atlanta, I didn’t watch them for five years. Why would anyone want to leave Milwaukee?”

When he was on the city council, before his time as mayor, Bob got the opportunity to play Irish music in Isesaki, Japan with his band, “Kells Water.”

“It’s named for an area in northwest Ireland. I’ve never been, but it sure sounds like some place I’d love to go.”

Knowing that he knows all about Springfield, I asked him what he loves about our city.

“The people. There are an amazing number of good people in this town and they made being mayor such a positive experience. All these people all over the city quietly making their neighborhood, their school, their community better. Not making news, not doing it for show, just neighbors sharing life and caring for those near them. That’s what I love about Springfield.”

Thanks to Catch 365, I have had the pleasure of meeting so many new, so many incredible people of Springfield that I never would have met otherwise. I completely agree with his assessment; there are some amazing people in this city.

After we parted ways, I was listening to Anne Lamott’s Bird by Bird on the short drive to pick up the girls from school. I heard these words and immediately grabbed my notebook to write them down.

“Baseball can give us back ourselves…Baseball, if we love it, gives us back our place in the crowd. It restores us…Baseball, like life, throbs with hope, or it wouldn’t exist.”

This is exactly why I want to play catch on days good and bad and every day in between.

Baseball gives us back ourselves.

It throbs with hope.