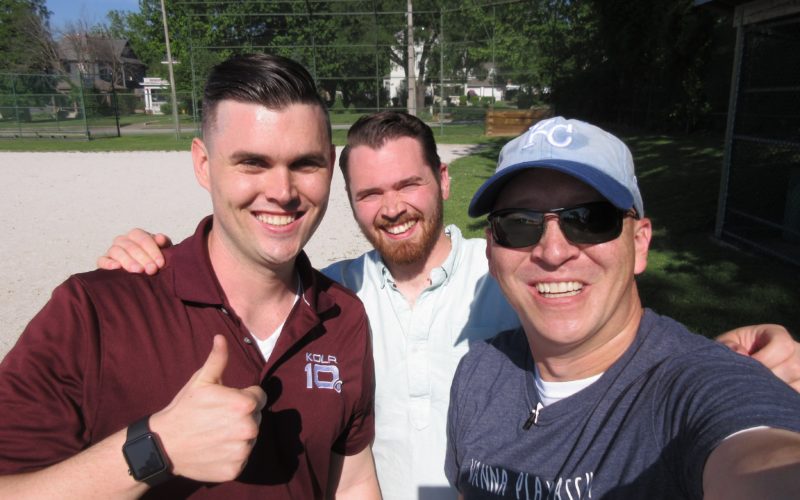 Daniel and I first played catch on Day #5.

On that 20-degree morning, I wore a hoodie and a vest and, knowing me, probably two pairs of socks in an attempt to keep my toes warm. Daniel had on his all-weather, L. L. Bean, KOLR-10 red coat. Chris was dressed like Daniel.

This morning, fifty degrees warmer than January, we met at the same field. Chris wore shorts and Daniel and I both had on short sleeves. He hasn’t played any catch since January. His Diamondbacks, however, are doing considerably better than my Royals.

With Chris documenting everything, of course I was a little nervous. I did a fantastic job of making not-so-good throws for the camera. I’m sure it’ll make excellent footage.

Daniel, ever the professional, stretched and scooped and continued the mic-ed up conversation.

He asked one question that I somewhat anticipated.

“Who is the best person you’ve played catch with?”

I answered as honestly as I could, “Whoever I’m playing catch with that day.” I do not want to get caught up in the comparison game as if one person is better than another because of how hard or how far they can throw a baseball. Every person has a story. Every person matters. This quest only continues because of the radical generosity and hospitality of others to join me in playing.

He then asked one question that really caught my attention.

“Has playing catch changed you?”

I’m sure I muttered an answer, but I have no idea what I said. My mind was already side-tracked by the question. If you watch Chris’s video, I’m certain you can see the moment when that question hits my heart.

The transformation of the main character is the point of any journey or quest story. How does the character change as they carry the ring to Mordor or track down the Horcruxes or search for the seven swords of the great lords of Narnia?

I make a number of bad throws these days experimenting with new grips and seeing what the ball does in response. Some throws sail high or wide or are short-hopped as I twist the ball around in my fingers and watch the red seams spin.

I don’t think that’s the change Daniel was asking about.

Characters change as they face obstacles and overcome or fail to overcome them. Characters also change in relationship to other characters in the story. This is how I’ve changed.

Thanks to this quixotic yet extraordinary venture, I have met dozens of new people I never would have met otherwise. They have trusted me with their baseball stories and their life stories and their audacious dreams. Every day, I am humbled and inspired as I meet another amazing person on this planet.

I am more convinced than ever that baseball is ultimately a game of hope. Each day, phones are stuffed in pockets and throws bounce or sail and sweat drips from the bill of my hat and I connect with another person. I do not take that connection for granted. That connection, whether it lasts for a quick 20 throws or extends into a game of long-toss, is a powerful reminder that we are all on the same team, circling the sun on God’s first flung curveball.

One thing that hasn’t changed is my desire to throw out a first pitch for the Royals. The silver lining to a season of struggles — maybe there won’t be many people in the stadium to watch me bounce it in the dirt.