I remember the year Kaylea played fast-pitch softball. At the beginning of the season, she and a teammate participated in a free clinic for those playing baseball and softball in the Greenwood Sports Association. They were the only two girls in attendance. Former Royals player Les Norman was the instructor.

Before the skills clinic started, Les gathered all the players around him in the outfield grass for some introductory remarks. During his speech, he said the skills they were going to practice that morning would be applicable to everyone, whether they played softball or baseball. One of the boys sitting near him commented quite loudly, “Softball? Oh come on, that’s not very hard.”

Immediately, Les spoke in defense of fast-pitch softball. He explained that, because of the distance between the mound and the plate, fast-pitch softball is actually harder than baseball. He commented that the girls who play fast-pitch are every bit the athletes as the boys who play baseball. I could be wrong, but I think he even said something about the girl who used to play on his baseball team. The boy was silent for the rest of the clinic. Kaylea looked at me and positively beamed with pride at Les’s remarks.

I was thrilled to learn that the Beijing Shougang Eagles and the Aussie Spirit were coming to US Ballpark in Ozark this season. They are two of the teams in the National Pro Fastpitch league.

Cheri, the commissioner for the league, told me, “This year, the NPF league will celebrate its 15th season. It’s the only fast-pitch softball league in the United States. The league rosters some of the world’s very best players in the sport of softball including former Olympians, NCAA Champions, Players of the Year and Women’s College World Series MVPs. Softball is wildly popular in the United States with the ESPN family of networks carrying over 600 games in 2018 before the NCAA tournament began. Every pitch of the three-week long NCAA tournament is carried live.”

The National Pro Fastpitch season is 48 games in 60 days, with the championship series played in Rosemont, Illinois in mid-August. After watching tonight’s game, I’m tempted to head up there.

I ran into Coach Wilson as she was visiting with local coaching legend Mark Stratton. Coach Wilson told me stories of growing up on a farm in northwest Missouri and part of her incredible 25-year collegiate coaching career.

Such is the heart-breaking nature of this great game.

Coach Wilson then introduced me to “Little Bear.”

“I wanted you to play catch with Little Bear because what you see in her beautiful smile is what you see on the field. She loves people, she loves to play ball, and she is a terrific ambassador of the game.”

Little Bear, who wears number 42, is the youngest player on a team with players aged 17 – 31. We walked down the right field line with the team interpreter. I could hear her first throw. It sizzled through the air. I stretched as I threw, softly tossing the ball as straight as possible. Little Bear is a pitcher and she showed me how she held her fastball and curveball. Thankfully, knuckleballs are a universal language. She gave me a thumbs up and a giggle after a particularly good knuckleball. We finished playing catch with a round of quick toss, both of us smiling, the interpreter filming.

While the Eagles warmed up, I visited with Jeff (Day #24).

We watched in awe at the “electric snaps” of leather just a few feet in front of us.

From the team introductions and throughout the game, the Eagles were full of energy, shouting cheers that echoed off the outfield walls. 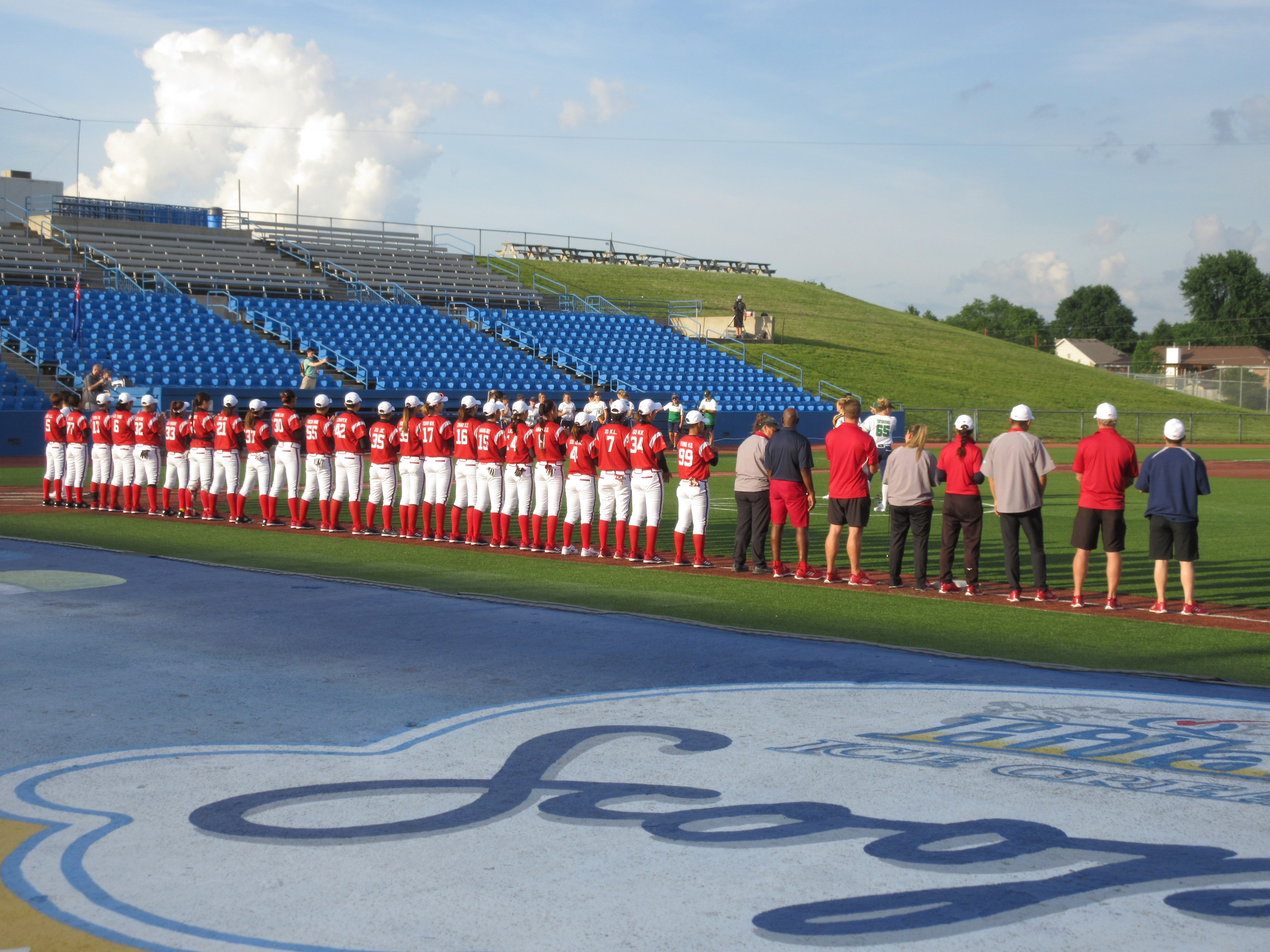 Their pitcher, Wang Lan, had a no-hitter through three innings and threw a complete game, allowing only one run on three hits. Beijing won 5 – 1 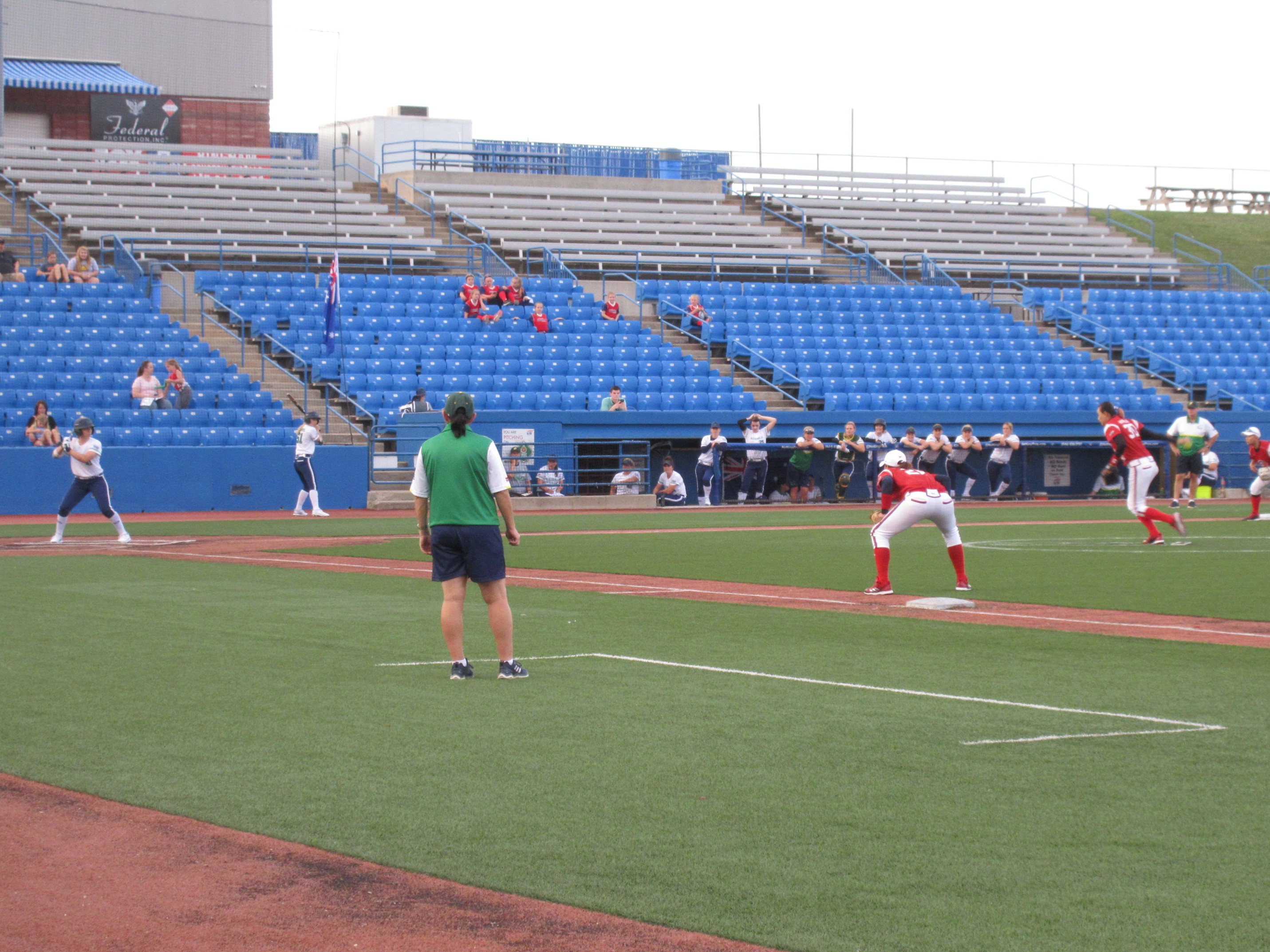 Yesterday, the Eagles and Spirit played a doubleheader and, tomorrow afternoon and evening, they will play another doubleheader. I, too, will have a catch-playing doubleheader: one with a Cardinals fan, one with a player from the Aussie team.

Thank you Coach Wilson and Little Bear for an incredible and unforgettable international game of catch.