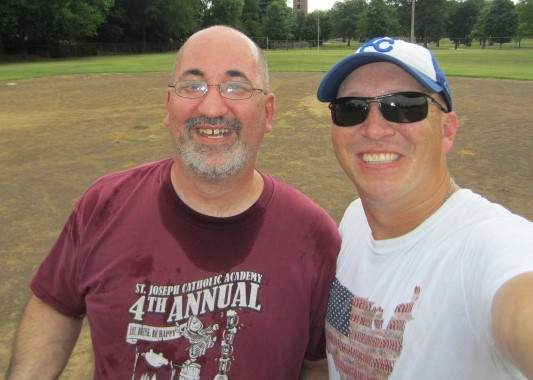 Bob Nelson became famous as a stand-up comic with his collegiate all-star football routine. At one point, I had it memorized. Jamie and I saw him in person in Springfield the first year of our marriage. He was performing right across the street from our apartment. I remember tipping him and shaking his hand afterwards. My cheeks and stomach hurt the next day from all the laughing.

Other comics I have thoroughly enjoyed are John Pinette — Get outta the line! — and Brian Regen — Half game, whole snowcone.

In the years before cell phones and Nintendo, Brian and I used to ride bikes around the neighborhood. I had to go home when Mom rang the cowbell. I don’t think I’ve seen Brian in person since high school graduation.

You can play catch for a long time when you’re catching up on 25 years.

Brian’s story starts with sportswriter dreams that led to a California road-trip adventure and almost signing up for a cult-like-vegan-only-community. He returned to Springfield, applied at Hardee’s, met his now wife, started writing for Springfield Business Journal, considered becoming a political columnist, resigned because of mystery illness, worked for cemeteries, experienced an answered prayer, started blogging and writing poetry, and now works in St. Louis four days a week.

“But I think I’d like to try stand-up comedy,” Brian said.

Those words ring true to the Brian I knew from our biking days.

I don’t know anything about the stand-up comedy scene in Springfield, but I know that the world needs to laugh a little more.

On behalf of Brian and out of a desire to laugh until my cheeks and stomach hurt and I’m crying and having trouble catching my breath, I’m asking for help. Before 2018 is over, I’d love to see Brian on a stage and hear his routine, even if I provided him with plenty of material just from our time playing catch.