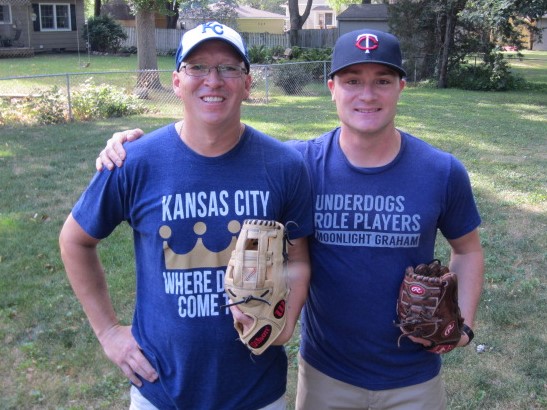 On the way home from Field of Dreams, Dad and I found Moonlight Graham.

He welcomed us into his home and extended hospitality through a great game of catch. Throws popped loudly in the spacious shaded backyard. A pitcher in college, Moonlight is currently in training for a game at the Field of Dreams in August where he and baseball players from his talented family will compete against an all-star team from England, Ireland, and Scotland.

The Fort Dodge Gypsum Eaters against the Kent Buccaneers.

“The team name is a tribute to the town teams from the early 20th century,” he said.

I asked to see his breaking pitches and off-speed stuff and was relieved I wasn’t the one who would be trying to hit them next month. 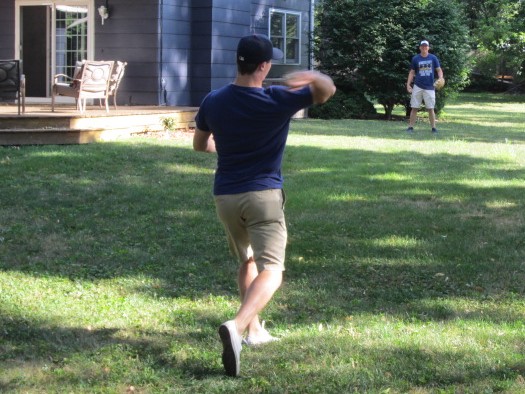 Knowing the importance and inspiration found in sports stories, for the past two years Moonlight has been working on a podcast.

“My brothers and I really wanted to celebrate the role player, the underdog, and the great stories in sports.

Stories like benchwarmers and waterboys and trainers and people who travel the country playing catch. Moonlight has interviewed a couple big names, too. Names like John Shuster.

Shuster is from Chisholm, Minnesota where the name Moonlight Graham is still featured on the annual festival days. In the 2018 Winter Olympics, Shuster competed on the US Curling Team. For the first time in history, the US won the gold medal.

“I sent him an email the morning after they won,” Moonlight said. “He responded within the hour. He was on a flight to New York City to do some talk shows. We set a time the next day and I interviewed him before he went on with Jimmy Fallon.”

As a thank you, Moonlight sent t-shirts to the US Curling Team.

“Last week, at the ESPYs, Shuster’s Instagram story featured him wearing the shirt at the pool party.”

Adam Greenberg, the modern-day Moonlight Graham, has also been featured on the podcast. I remember going to Dad’s house to watch the game where Greenberg faced R. A. Dickey. His only at bat in the majors and it’s against one of the best knuckleballs I’ve ever seen.

“Everybody’s got a great story to tell and we’re having a lot of fun sharing these stories.”

For the past several years, I’ve been drawn to write these same kinds of underdog stories. Stories where sports and life and faith and friends come together. Where winning and losing really isn’t the focus. Where the game reveals wisdom and hope and beauty.

Learning from Coach Bell and his battle with ALS.

And America at the Seams is full of baseball underdogs — from Dave Stevens to Oz Sailors to Iowa’s Willy Amos.

Moonlight’s best advice comes from his high school basketball coach. “The moment you think you’ve made it is the moment everyone else starts catching up to you. Never consider yourself to have made it. Always continue to improve, continue to press on.”

The perfect motto for underdogs of all ages.

This November over Thanksgiving weekend, Moonlight’s getting married. I’m thinking about sending Alicia a blue hat as a wedding gift.