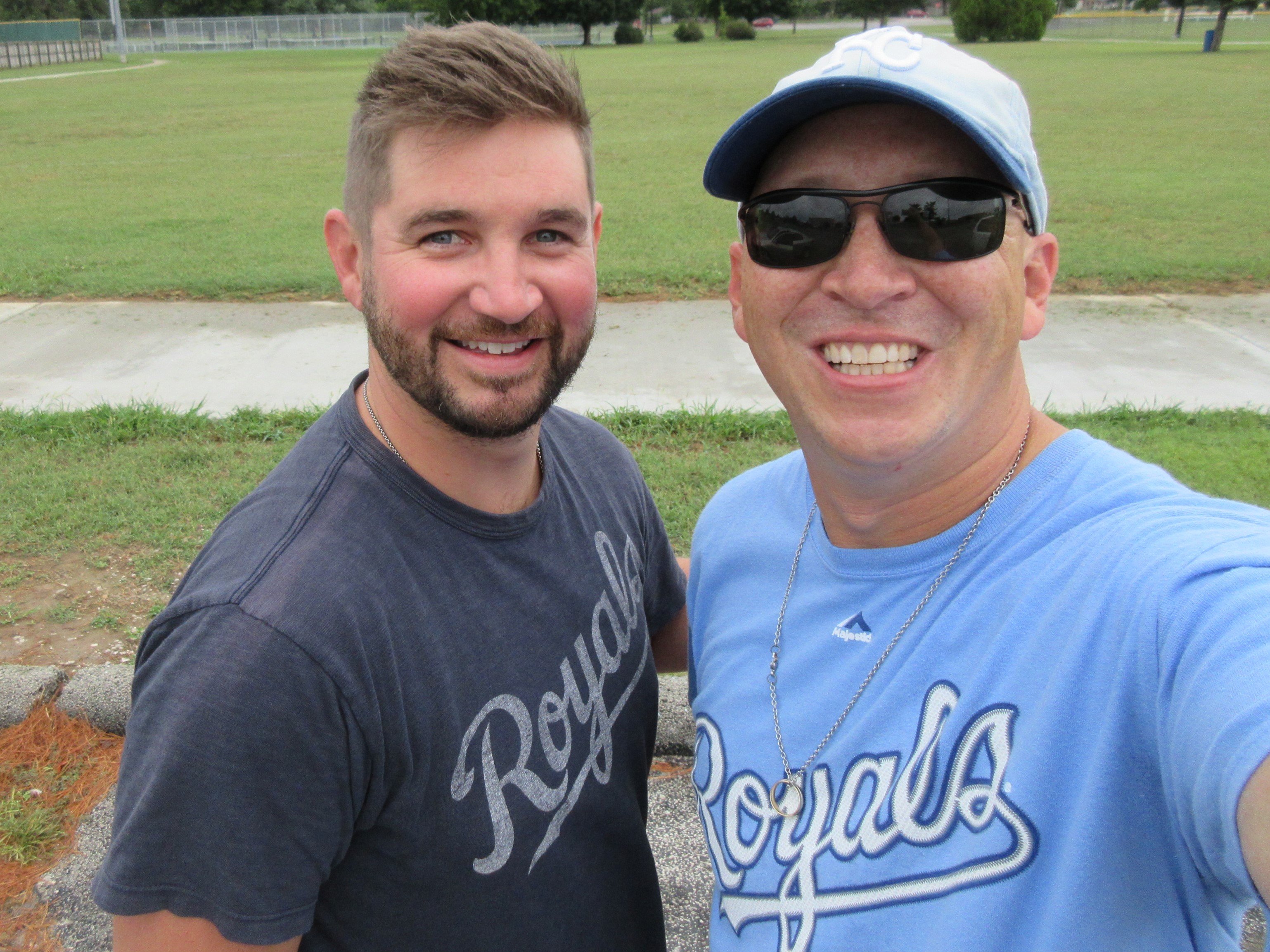 On the last day before school starts, I invited Kaylea to join me at today’s game of catch, just to have her company. With all of the adventures my family has had this summer on the road and meeting so many amazing new people, I’m not ready to send Jamie and the girls back to school tomorrow. Kaylea and I pulled into Meador Park 15 minutes ahead of Ryan and she helped me warm up, playing catch on the sidewalk so as not to get her feet wet.

Ryan is a friend of Kody (Day #219), so it makes sense that rain would be in abundance in southwest Missouri, such absurdly odd weather for mid-August. Thankfully, we were able to connect in a rain-less window.

As soon as Ryan stepped out of his car, I thought he looked like Drew Butera or Jon Kinsella. It didn’t surprise me in the least that Ryan’s a catcher.

“It’s been at least 12 years since I’ve played catch,” Ryan said, holding tight to a Wilson catcher’s mitt model A2403, also known as “The Pudge.” Ryan has been catching as long as he played baseball, from coach-pitch through high school. He shared stories of catching doubleheaders in 95 degree heat, doing everything he could to cool off in the dugout in between innings.

“When no one else wanted to catch, I was ready.”

I’ve never played catcher in a game, only trying on the gear occasionally at little league practices, never once contracting lice through the shared equipment. Every now and then, I’d help warm up a pitcher in the bullpen, but that’s as close as I got to actual catching.

For years, Coach Guttin (Day #31) would have catching clinics at MSU where high school catchers would get the opportunity to catch and work with major league pitchers.

“Cut fastballs would break feet,” Ryan said. “It was a pretty incredible experience catching pitchers who threw that hard.”

Even though my arm was feeling quite fantastic after yesterday’s massage, I didn’t try to throw anything that hard, focusing my energies on different finger pressures on a two-seam fastball. I’m almost positive a couple of them had movement that were more than the effects of just gravity.

Just a couple weeks ago, Ryan and his wife, Jennifer, were in Chicago and watched the Cubs play the Diamondbacks at Wrigley. They saw one of the games the Cubs won, unlike Andy (Day #223).

When he’s not advising people financially or entertaining his two-year old daughter with Pete the Cat songs, Ryan is an avid hunter. He showed me a few pictures of impressive bucks he shot last year — a 7-point and an 8-point, one from southwest Missouri and one from northwest Missouri.

“The big news for this year is Jennifer and I are expecting our second-born in November, opening day of gun season. Guess I’ll have to do all my hunting during bow season.”

Kids truly do change everything.