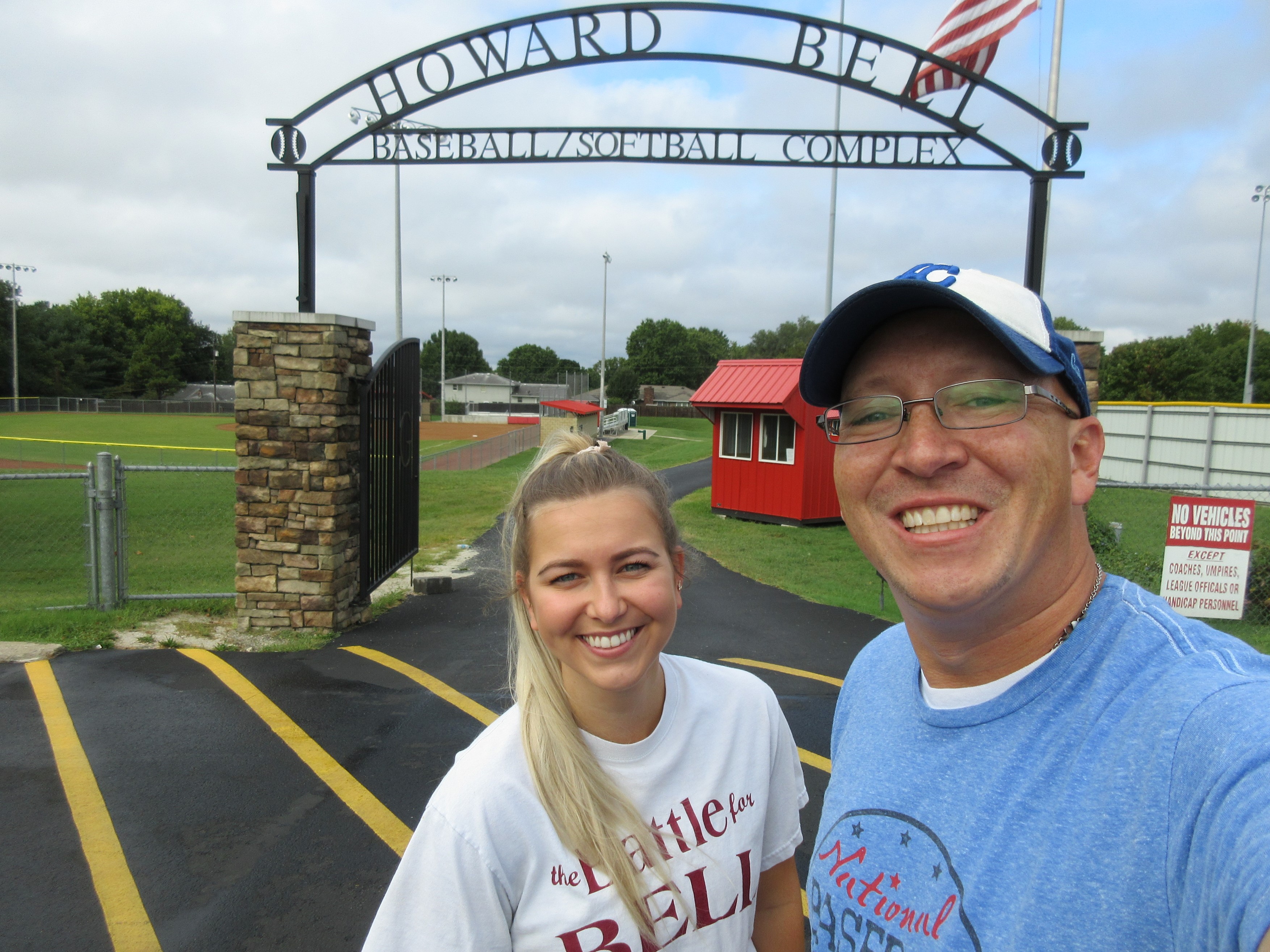 For the third time, two fantastic collegiate baseball programs will face one another in an exhibition game honoring Glendale coach and Missouri State University standout Howard Bell. At 6:00 pm tonight at the U. S. Ballpark, MSU and Drury will play ball and raise funds for the ALS Clinic at Cox South Hospital. Gates open at 4:00, tickets are only $5, and there is a silent auction full of incredible baseball packages taking place.

After my family moved back to Springfield, I was able to spend some time with Howard, talking baseball and life and watching up close the courage, grace, and humor with which he battled ALS. I’ve played catch with his wife Kim (Day #103) on his birthday and with his brother Darrin and nephew Jake (Day #144) on the day he was inducted into the Missouri Sports Hall of Fame.

And now his daughter, Kameron.

Kameron played softball growing up and was the catcher for her team at Glendale. Catcher is the only position I’ve never played in a game. I have the utmost respect for anyone who is brave enough to put on the gear and take charge of the game from behind the plate.

“Dad refused to coach me growing up because he wanted to just be my dad, not my coach. He spent so much of his life coaching other kids and he wanted sports to be a different experience with me. When I was in high school, though, he did take the opportunity to coach me.”

Wearing her Battle for Bell t-shirt, Kameron and I met at Glendale High School where Howard taught and coached and the baseball and softball complex now bears his name. We tossed the ball in the bullpen under heavy gray skies while background music played from some undetermined source.

“It’s probably been about 6 years since I’ve played catch,” Kameron laughed as she stood behind home plate. “When I was 14 or 15, dad and I would go out in the backyard and play catch. And he threw the ball hard, hard enough it stung my fingers every time I caught it. I’d get as far away as I could on the other side of the yard and he was still throwing the ball hard.”

We both laughed at that story.

Whenever I hear stories of Howard from friends in the community, they almost always center on how he treated others, how he listened to what they were saying, how important he made them feel.

“Dad was nice to everyone, it was just how he acted all the time. He stressed that we didn’t know everything other people were going through and that being nice, being kind, is something we can always do. Making that extra effort to go out of your way and put a smile on someone’s face can really make a big difference.”

Since I’m not enrolled in any classes at either school and this game is an official NCAA-approved match, my chances of benchwarming for either team are pretty much nil. Besides, neither team really needs (or wants) my help as both are coming off fantastic seasons and in good position for next spring. At The Battle for Bell, I’m just a fan celebrating one more excellent example of how baseball is more than just a game.

“At The Battle for Bell, I love remembering dad, hearing stories about him and how he’s still making a difference. Selfishly, I just love hearing his name. This exhibition game started because of him, and now it’s so much bigger than just him. Some people come just to watch baseball or because they knew my dad. Some people come because they knew someone with ALS. But everyone who comes really does have a good time and they are supporting such a great cause.”

Baseball truly does bring people together and tell the best stories.