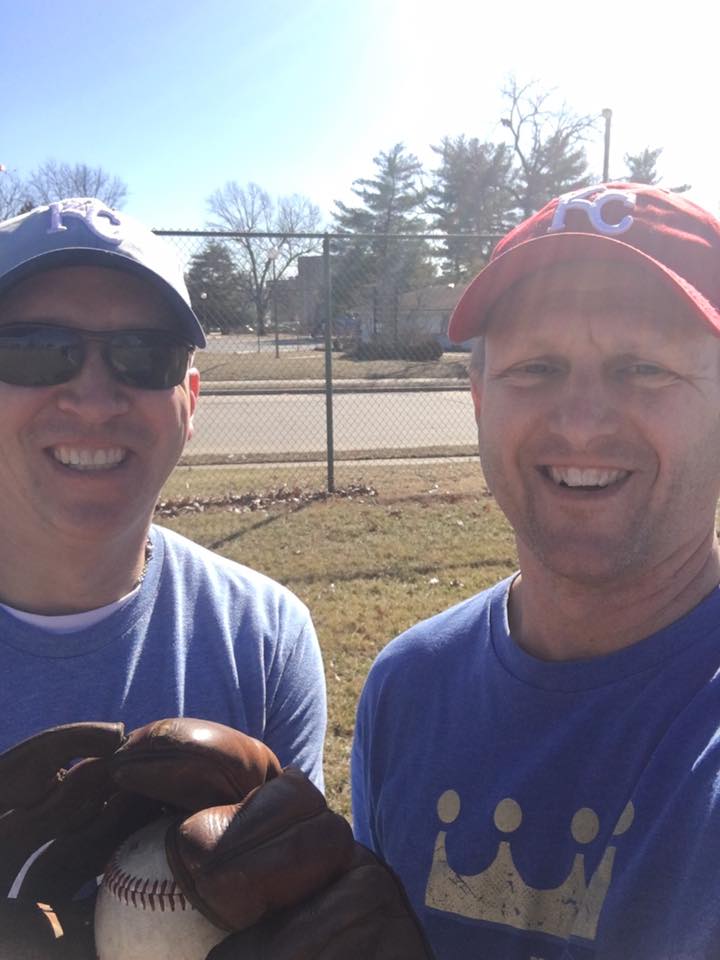 When I got home from the twilight game of catch there was a new glove waiting for me.

Sean of Painted Gloves told me to contact Brett of Play OK Antiques in my pursuit of a vintage glove suitable for playing catch. Brett, from Connecticut, grew up a Royals fan. In 1985, he went to his first game, watching the Royals play the Red Sox at Fenway. Another Royals fan at that game gave Brett a foul ball hit by someone whose last name was the same as his first. Brett sent the glove for free — 1940’s model, split-finger Wilson.

“Glad to help out a Royals fan who is doing something cool.”

I woke up this morning and could not wait to use it.

I tossed the ball around with Kaylea while waiting for the church doors to open for worship band practice. I tossed the ball with Harper, Atticus, and Brennan before worship; they each tried on the funny-looking glove. After church, I met Owen.

Owen from Blue Springs was in town visiting family and to watch the MSU Bears basketball game. We connected at the Jenny Lincoln Field where a baseball practice was already underway. Owen has the honor of being my first southpaw catch-playing partner. I caught pretty much everything he threw right in the middle of my palm. Though it stung a little bit, I was wonderfully entertained and distracted by Owen’s baseball stories:

His daughter met Buck O’Neil at the NLBM story.

But his best story starts with the 2014 postseason. Shortly after Game 1 of the ALDS started, Owen was rushed to the hospital. He spent the entire postseason in the hospital, recovering from surgery repairing a ruptured esophagus. He was dismissed the day after the Royals lost the World Series.

The redemption part of the story, however, is amazing. Thanks to a connection from college, Owen watched the Royals play the Astros in the 2015 ALDS from the owner’s suite.

I completely lost track of time playing catch with Owen. Thirty minutes later, after one throw popped nicely on my palm, we decided to call it a day. My left hand matched his Nebraska red Royals hat.