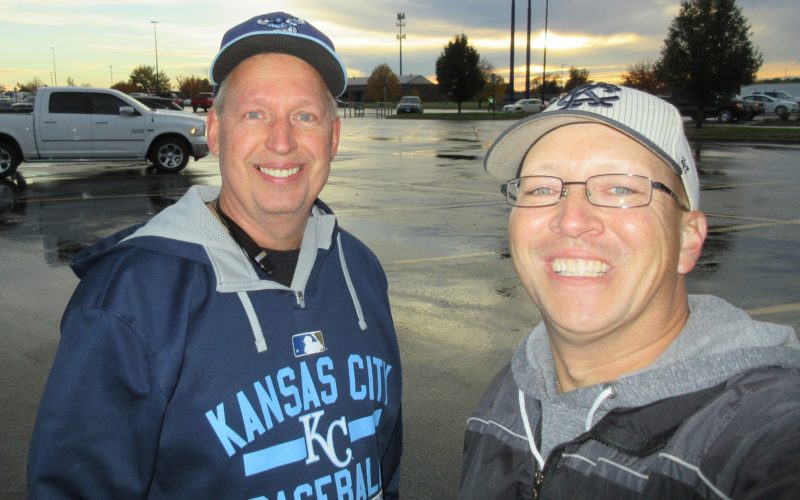 Clark must be a saint. As soon as he hit city limits, the rain stopped and the sun peeked through the clouds for the first time all day. A week ago, Clark contacted me about the possibility of catch, but the two days he inquired about were already scheduled. When my partner notified me first thing this morning of their need to reschedule — another story for another day — I initially panicked, and then I remembered Clark.

Clark was driving through Springfield on his way to Arkansas to visit his son and grandchildren. Not knowing of his ability to clear the skies, even though I am not a fan of parking lot catch, I suggested we meet at Sam’s Club, trying my best to keep the location highway friendly and relatively dry.

Clark’s friends call him Moose, thanks to a Bullwinkle t-shirt he wore to church softball team practice back in the ‘80s.

“I was Moose long before Moustakas was thought of.”

We briefly stretched and started tossing the ball, occasionally stopping as drivers interrupted us or temporarily parked directly behind us. Moose’s earliest baseball memories involve watching the Kansas City A’s with his dad.

“Twin-bill doubleheaders against the Yankees. Two games for the price of one.”

Last summer, he delivered approximately 50 dozen baseballs to Nate (Day #149) and Baseball Seams Company on a day trip to South Dakota. He worked as a guest ambassador for the Royals this past season, and, before that, worked at Mac-N-Seitz for multiple years.

I thought I was going to be most jealous of Moose’s stories of hanging out and befriending Kevin Seitzer. I have cheered for Kevin Seitzer from his days of competing against Mark McGwire for Rookie of the Year in 1987. Seitzer finished second. I cheered for the Braves this postseason because Seitzer is their hitting coach. Moose shared story after story of MLB players who sought out Seitzer’s hitting expertise, and stories of how Seitzer was generous in including Moose in several photo opportunities with those players.

But then Moose told me his stories of serving as a personal driver for Buck O’Neil, driving him from the Negro Leagues Baseball Museum to a community fundraiser in Weston for multiple years.

Any day you get a chance to hear stories of how Buck used baseball to spread joy and hope, no matter how rainy that day might be, is a good day.

I didn’t want to delay Moose from his travels for too long. His wife was in the car waiting and I know how many times I’ve kept my wife waiting in the car during games of catch this year.

But as he drove away, I promise, there was a portion of a rainbow in the sky along with a gorgeous sunset of pink, orange, and purple stripes.