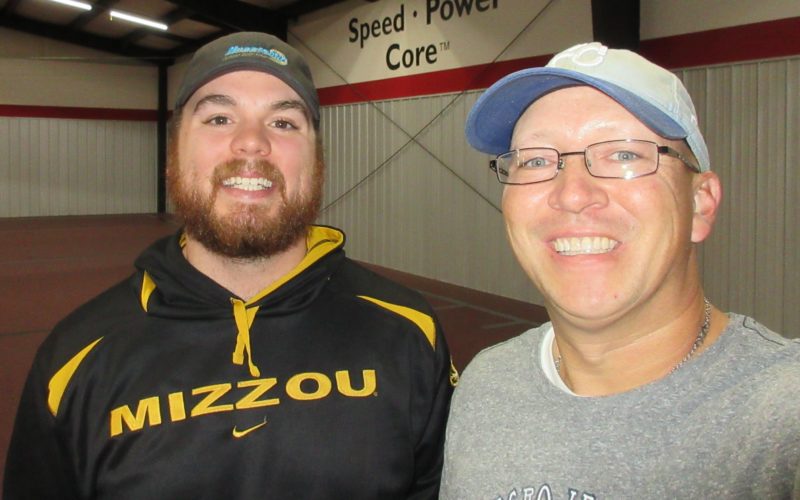 “Happy Guy Fawkes Day. I can get a mask and play catch if necessary,” Dad texted.

To which I replied, “Remember, remember, the fifth of November…”

“The gunpowder treason and plot…”

“Why the gunpowder treason…”

“Should ever be forgot.”

In the middle of a steady downpour, the messages made me laugh and want to re-watch V for Vendetta. Thankfully, providentially, I had scheduled an indoor game of catch with Ryan.

In 2008, Ryan was the Southwest Missouri Player of the Year. He gave me the quick highlights of the first game of his senior year, playing quarterback against Parkview.

Those kind of numbers sound exactly like something I used to do playing Tecmo Bowl on the Nintendo.

Ryan quarterbacked at Mizzou for a couple of seasons and was inducted into the Missouri Sports Hall of Fame Elite 11 Class in 2017.

“I really didn’t expect it. It was definitely a cool honor.”

For 5 years, he also coached competitive USSSA baseball out of Lebanon.

“I was asked to do it and really didn’t know what to expect going in. I was really surprised how much I enjoyed doing it. That experience is part of the reason I’m working at RedLine, part of the reason I’m helping kids through sports now, where they can learn so many important things. Things like the importance of truly being a team player. If you don’t put the work in, you won’t see results. If you don’t let other people help, you won’t be as good as you could be.”

Ryan loves all sports and helps out with not only football, but basketball, baseball, and soccer, too. I was beyond grateful for a dry place to toss a ball, even if I had some reservations when Ryan professed his love of the Los Angeles Rams. He spoke highly of Patrick Mahomes though, so I’ll give him credit. I guess we’ll see what happens in two weeks in Mexico City.

Both of Ryan’s parents studied at Mizzou and are now veterinarians. I was born the first semester Dad was in vet school in Columbia and my sister was born during finals week in May his junior year. I’m pretty sure the best veterinarians in the world got their start at Mizzou.

Ryan used his catcher’s mitt while we played catch, and our two gloves echoed loudly in the empty space before RedLine opened. Once the athletes started coming in, we wrapped up catch so Ryan could get to work and I’d still be welcomed for future indoor catch playing sessions.

I then drove to the doctor’s office for my first physical in a couple of years. The doctor asked plenty of questions and consulted the lab numbers before concluding, “Whatever you’re currently doing, keep it up! Maybe cut out a few carbs here and there, but everything really looks good.”

Now that my physician has been consulted and given me the green light, I better figure how to convince Jamie for Catch 365, Year Two.