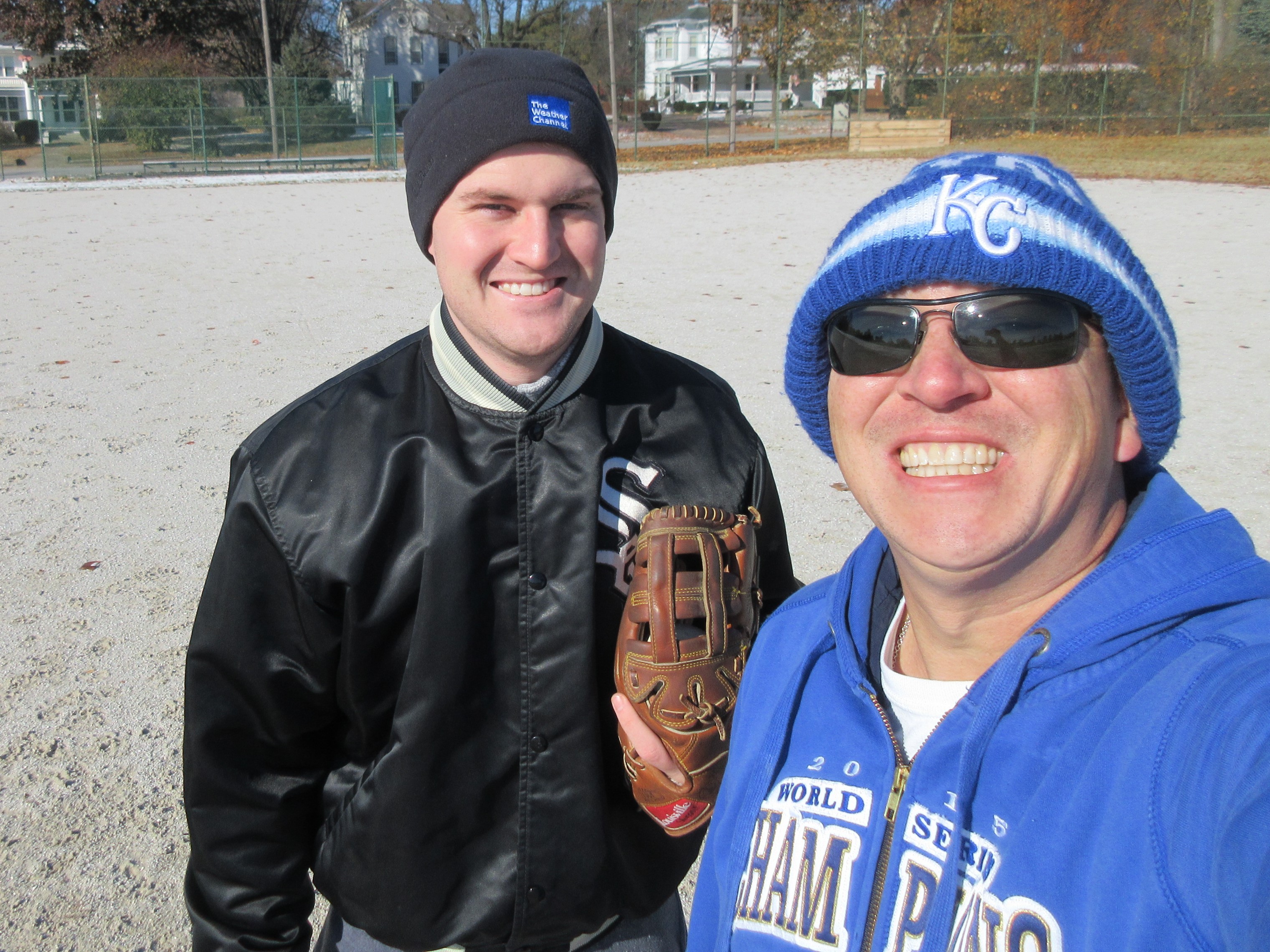 The rivalry between Royals fans and White Sox fans is quite intense. A large part is due to the two teams playing in the same division. Like the Cardinals and the Cubs. Like the Dodgers and the Giants. Like the Yankees and everyone under the sun.

Relations were not improved when two White Sox fans attacked the Royals first base coach in 2002. The coach suffered permanent hearing loss as a result of the attack.

“That crazy attacker did not help my defense of Sox Park,” Dan said.

Still, and I think Steve (Day #221) and Jim (Day #18) can testify, I try my best to extend hospitality and kindness toward all White Sox fans.

When I lived in Kansas City, I went to several Royals and White Sox games. I once sat next to Mark Buehrle’s family. Buehrle was an All-Star-and-Gold-Glove winning left-handed pitcher who had great success against the Royals. It was one of the few games the Royals lit him up; I tried my best to be polite in my exuberant cheering.

A couple years later, I sat next to Joe Crede’s family. Crede was also an All Star and a Silver Slugging third baseman. He had a fantastic day at the plate and on defense and was probably the player of the game. I congratulated his family on his behalf as we left the stadium.

With the wind chill in the single digits, I was beyond grateful Dan agreed to play catch today.

I didn’t expect him to be wearing the White Sox jacket when he got out of the car.

“This used to be an older Molloy’s jacket.”

Within the last couple of weeks, Dan was playing catch as he warmed up for his softball game. Last week’s rainout was supposed to be made up last night. With the temperatures and snow, however, it was a no go.

Until he gets married, Dan is claiming October 26, 2005 as the best day of his life. On that day, the White Sox swept the Astros in the World Series, winning the championship for the first time in 88 years. Former Royals player Jermaine Dye was the World Series MVP.

“I remember watching it with dad, getting the big hug when it was over. It’s just one of those memories that’s burned into my brain.”

The 1994 movie Angels in the Outfield is Dan’s favorite baseball movie.

The movie stars Danny Glover as the manager, Tony Danza as the pitcher, Christopher Lloyd as the head angel, and Joseph Gordon-Levitt as the hope-filled inspiring little kid.

“There’s something I love about that 90’s genre of baseball movie, of little kids making an impact on MLB players. From being just a fan to being in the clubhouse in the middle of the playoff run. The news conference to talk about angels is genuinely hilarious. And the way the players dress for the slow-pitch softball pick-up game….I went to Royals Opening Day one time and they were playing the Indians. So I wore a Brewers jersey and a Rockies hat, kind of a tribute to that scene.”

Dan was also at Royals Opening Day this past year when the White Sox unloaded for a 14 – 7 victory courtesy of 6 home runs, 3 by Matt Davidson. After leading 4 – 0 through one inning, the Royals only tallied three more runs, and those came long after the White Sox had secured the win. That game was an apt summary of the team this year.

Now a member of the sports team at KOLR-10, Dan shares his passion of sports and storytelling through broadcast journalism. Dan loves the great variety of sports he has the opportunity to cover and the involvement and support each sport receives from the greater Springfield community. He dreams of one day working for ESPN or MLB and broadcasting nationally.

Under a blinding sun and in the bitter cold, with the outfield grass still wearing yesterday’s snow, we threw the ball across the gravel infield downtown. We didn’t rush our efforts, and got some longer throws in after “warming-up.” When the fingers of my glove hand started to tingle, we took a quick selfie and shook hands and finally discovered common ground.

Jake was one of the first players Dan covered when Dan moved to Springfield in the spring of 2017 and Jake played for MSU. I cheered for Jake when I was part of the grounds crew at Hammons Field. I’m pretty sure I caught one of his batting practice home run balls. (Most likely, that ball has already been used up, thanks to this year.)

Drafted in the first round last year by the White Sox, Jake tore his Achilles trying to beat out a ground ball during Spring Training. And then tore it a second time in his back yard.

Dan and I would both love to see Jake succeed at the MLB level.

I hope Dan gets the opportunity to interview Jake Burger when he makes his White Sox debut. I also hope Jake hits three home runs. But if it’s against the Royals, I hope they lose the game.