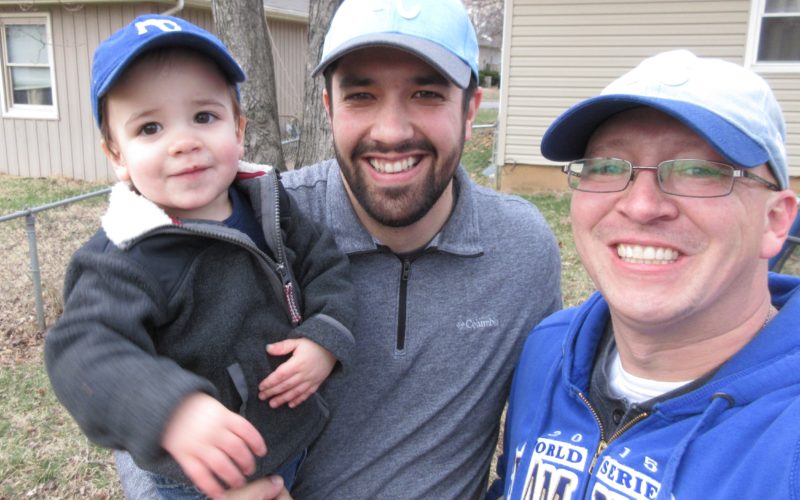 Sundays are for doubleheaders in these lion and lamb days of March.

In the sun and with a stiff breeze, Harper, Brennan, Atticus, and Will the Southpaw joined me for today’s pre-church game. Brennan and Atticus borrowed gloves from the back of my van. I usually store each glove with a baseball in the pocket. I jogged to the far end of the church sandlot parking lot and looked up as multiple baseballs were headed my direction. I caught one and successfully dodged the others.

Rule Number One: Make sure of eye contact before throwing the ball.

We played a game similar to pepper but without a bat, practicing pop-ups and grounders and quick transitions. Oh my.

Roger also joined the game and made a couple of great throws.

“Maybe get a ball with a beeper on it?” he asked.

Roger is blind. Eric, who has gifted me a couple old boxes of baseball cards, usually helps Roger in and around church. I made a note to do some research on baseballs for blind athletes.

After church, and after a Sunday afternoon siesta, I met AJ and his son Benton for the second game of catch. At 21 months old, Benton is now the leader for the youngest catch playing partner. He’s already been to his first game at the K with sights set on multiple return trips this summer.

AJ agreed to play catch even through the intermittent rain. AJ pitched at SBU, but tore his rotator cuff the fall of his freshman year. After surgery, AJ stopped pitching overhand. Influenced both by wiffle ball and sidearmer Byung-hyun Kim, AJ started throwing sidearm.

While alternating throws with Benton, I was on the receiving end of AJ’s sidearm stuff. I tried my best to honor Dan Quisenberry and match sidearm for sidearm, but I had very little accuracy from such an odd arm angle. I have great respect for catchers who work with sidearming pitchers; nothing AJ threw was straight. Late movement is real.

AJ is now a Royals fan with a very unique connection to the team: He was the very first mascot for the Northwest Arkansas Naturals, the Royals AA affiliate. He served as Strike the Sasquatch for two seasons and has tons of great baseball stories including watching the core guys who won the World Series rise through the minors.

“I just love being around baseball,” AJ said.

A man after my own heart.

As I was leaving, we started making plans to attend a Missouri State game together. Maybe we can snag a game ball for Benton.