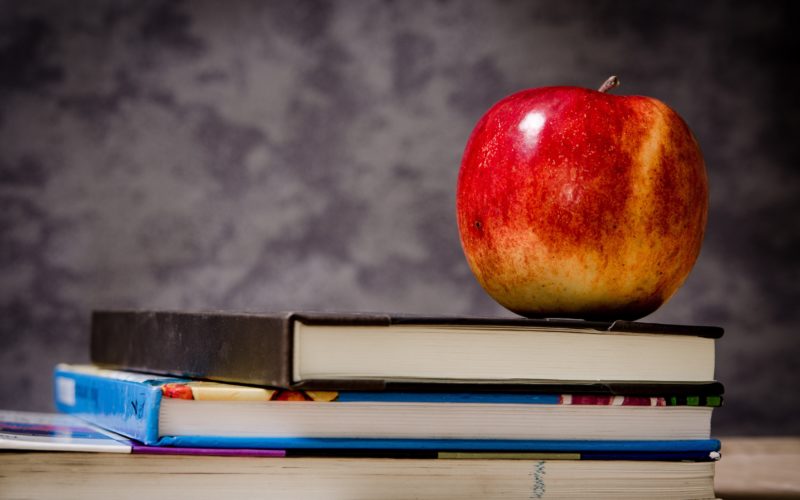 Sandy Rhodes was my 5th grade teacher at Delaware Elementary. I was in her class the year the Royals won their first World Series. I’m fairly certain my sister and I were the only students in the entire school cheering for the Royals over the Cardinals.

I have more memories from Mrs. Rhodes’ class than I do from any other year of my elementary schooling.

In Mrs. Rhodes’ class, every week we had to write sentences with our spelling words. If our handwriting was too sloppy or illegible, we had to re-write the sentences. At some point in the middle of the year, one of the spelling words was “shampoo.” Thanks to alopecia, I had been bald for five years by the time I started her class. My sentence: I use soap, not shampoo. While grading my paper, she started laughing out loud, laughing so hard it disrupted whatever the rest of the class was supposed to be working on. When she caught her breath, she called me up to her desk.

“This is one of my favorite sentences ever,” she said. She showed me my grade and asked to keep my paper.

Like any teacher, Mrs. Rhodes had bad days. The difference is she didn’t hide it. She embraced it. On her bad days, Mrs. Rhodes would come to school dressed completely in black and write “Viola Swamp” on the board, a tribute to Harry Allard’s book, Miss Nelson is Missing. When Mrs. Rhodes wore black, she meant business. Recesses were cancelled. Hours passed in silence. Lines down the hall were perfectly straight. The only time I’ve ever seen anyone kicked out of school was on a Viola Swamp day.

Random fact: Mrs. Rhodes had a permanent crush on Tom Selleck. She loved his mustache.

Another fact: Mrs. Rhodes smoked. She knew it was bad for her health and she wanted her students to know it was bad, too. One day, she took us outside her classroom and lit up a cigarette. She had constructed a clear set of lungs to show us what smoking actually does to a person’s insides.

“It coats your lungs, turns your teeth yellow, smells bad, and makes your voice sound funny. Trust me, it’s better if you never start.”

Because of Mrs. Rhodes, I have never had any interest in smoking.

I was in Mrs. Rhodes’ class the day of the Space Shuttle Challenger disaster. She shed tears and hugged several of us students.

I was in Mrs. Rhodes’ class the first time I read a book that made me cry. “Good stories can do that to you.”

I was in Mrs. Rhodes’ class when my parents decided to surprise me and my sister with a trip to Disney World. While on vacation in Florida, I attended my very first Spring Training — the 1986 Houston Astros — and spent time with Nolan Ryan and Yogi Berra. I sent Mrs. Rhodes a postcard from Florida telling her the details.

“The first time I read it, I thought it said ‘Yogi Bear,’ not ‘Yogi Berra.’ Keep working on that handwriting,” she teased me when I returned to class.

Toward the end of the school year, we had a major test, though I don’t remember in which subject. Before we took the test, Mrs. Rhodes went person by person through the room and asked us to say, out loud, in front of God and everyone, what score we expected to receive on the test. Predicted scores ranged greatly. When it was my turn, brimming with orneriness and confidence, I stated, “100%.” She wrote it down on the board and continued until everyone had a chance to speak.

“Ethan, you don’t have to take the test. Feel free to do whatever you want. Everyone else, clear your desks.”

I asked to be dismissed and went to the office to call Mom and tell her the completely unexpected good news. I had studied for days for this test and no longer had to be worried.

Once 5th grade finished, I stayed in touch with Mrs. Rhodes, coming by to visit her throughout junior high, until my family moved to the opposite side of town at the end of my 8th grade year.

Moved to Texas for seminary.

Moved to Kansas City for work.

Moved back to Springfield in 2012.

On a perfectly miserable rainy day in the spring of 2013, I had a book signing at Barnes & Noble. Over the span of two hours, I signed three books. With one hour left to sit and stare, I excused myself from no one to go use the restroom. When I returned, there was someone waiting for me at my table.

It was Mrs. Rhodes.

She greeted me with a hug and kiss.

She purchased multiple copies of the book and we laughed and reminisced and it was the best book signing ever.

Mrs. Rhodes passed away in February of 2015.

Today would have been her 78th birthday.

Thank you for being you.