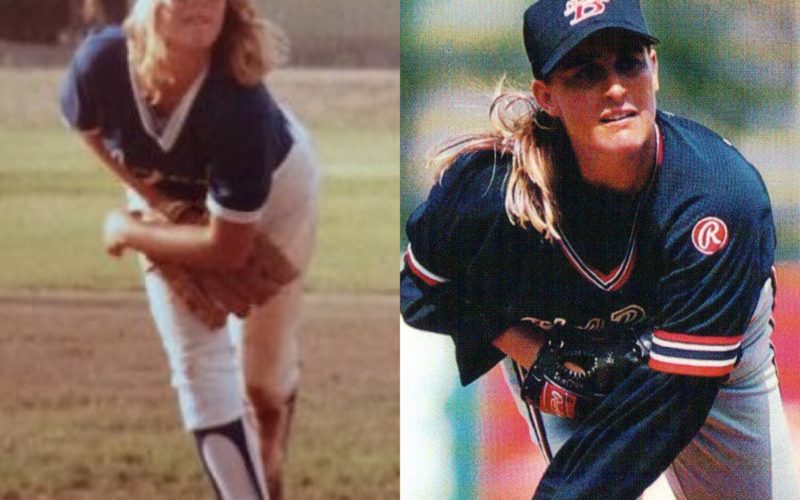 It’s rainy and windy and there’s a forecast for a Mother’s Day snowstorm in the northeast.

What a perfect day for a game of Quarantine Catch.

Today, I’m flying to LA, to Dodger Stadium, to meet Missy Coombes. From 1994 – 1996, Missy was a left-handed pitcher for the Colorado Silver Bullets, the all-female baseball team who competed against male teams. We’re headed to Dodger Stadium because Missy grew up a fan of the team, dreaming of a chance to play the west coast boys in blue. I’ve been to Dodger Stadium once, in August of 2013, and watched a Hanley Ramirez home run lead the team to a 2–0 victory in a game that was only 2 hours long. Friday night fireworks followed.

“My first glove was a gift I had asked for from my grandma Coombes. For some reason I had a right-handed glove and I used to catch the ball and then take off the glove to throw the ball. I was very young, maybe 4 or 5, and I can still remember the conversation and saying to her, ‘Grandma, I want a right-handed glove.’ She responded you have a right-handed glove. ‘No Grandma. I need a glove for my right hand,’ which meant I needed a left-handed glove.”

“This glove was a gift for my 40th birthday, from my two young boys at the time. The reason for this choice goes along with the symbolism of ‘a catch with dad,’ that means so much to me and I have passed it on to my own boys.”

Since I can use any glove I want, and since I’m playing catch with a professional pitcher, I’m borrowing a catcher’s mitt from Salvador Perez. Since I’m at Dodger Stadium, I’m wearing a Dodgers jersey with a red #42 underneath the scripted name.

“I also loved the ’70s Dodgers of Garvey, Lopez, Cey, Russell, Baker, Monday, Reggie Jackson and Yeager. Then there also was George Brett & Rod Carew. If there was one player I could see play in person would be Bo Jackson. He is someone I would want to see play and I am sad his career was cut short by his hip injury.”

I have seen Bo play in person, and witnessed this home run. The Royals lost that game, however.

I shared with her my story of writing a children’s book that talked about Bo and his namesake, SuperBo. Missy and I both agree that Bo is on the list of people with whom we’d like to play catch.

Listening to Missy describe her best days on the field was pure joy.

“I have so many memories I cherish from my playing days, but the one that I would say was one of my best was a complete game I threw in Buffalo, NY. Pitching a 1 hitter in Candlestick Park was also up there and then my back-to-back starts to end the season with 13 strike outs in Lancaster, CA and then 14 strikeouts in Grand Junction, CO.”

A League of Their Own and Field of Dreams are her first two favorite baseball movies, followed by Bull Durham — “we played there, in their new stadium and in Asheville.”

Phil Niekro, the knuckleball-hurling Hall of Famer, was Missy’s manager for the Silver Bullets. So I prodded for tips with throwing the whimsical pitch.

“I do not throw a knuckleball really. I have tried throwing a few playing catch but not my pitch really. Depending on the day, my slider or changeup were my best pitches. As a left handed pitcher I have a lot of cut to my two seamer. Even now I can get my ball to cut playing catch and my change drops off the table when I throw it. I was just throwing all three with my son yesterday and actually still have some feel to all of my pitches. Arm strength is not at all the same though.

“Phil is the one of the kindest people I know and playing for him was an honor that I will always hold close to my heart. He is one of the funniest guys as well, and both he and Joe could make me laugh nonstop. I have so many fond memories and the Knucksieisms are endless really, but mostly part of our Silver Bullets family.”

What she says is completely true. She can’t throw anything straight. I’m constantly jealous of the natural movement southpaws have on all of their throws. Every now and then, I get a little movement on my two-seam. I’m pretty sure it’s wind-aided. I decided it’s time to finish the game and closed with two important questions.

What advice do you have for young girls who want to play baseball?

“The one thing my mom taught me very young, was pursue whatever you want to in life and don’t allow anyone else to tell you you can’t. If a young girl loves baseball and wants to play, then I would pass on the same message my mom shared with me as a young girl. Play with passion and love the game. It has filled my soul and I hope it has a similar impact on you.”

What’s the most important thing baseball taught you about life?

“Life will throw you curveballs, and the one thing you always can control is how you react.”

Thank you so much, Missy! I’ll let you know when Bo calls.