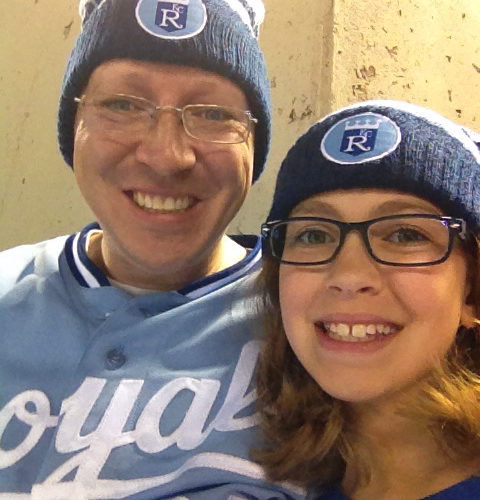 I kept my promise; we made it to the game —

of the regular season.

anything more than baseball.

A janitor gifted us a cleaned out nacho helmet.

The trek to the upper deck was slow and painful,

thanks to a gimpy ankle.

she, in all of her innocence and baseball ignorance,

dares to make her prediction,

“The Royals are gonna win Dad.”

“No, Dad. The Royals are gonna win

the last game of the season.”

“Oh, that’s not until next week.

They finish the season playing in Minnesota.”

Eye roll and a huffy breath.

The last game of the season.

We’re gonna do it this year, I just know.”

I listened and nodded and patted her softly on the back.

I wrote a note on my scorecard.

We kept the baseball and helmet and stocking hats

and tossed the scorecard in the trash.

as the away team,

against the Wild Card-winning Astros.

“Congrats to the Astros on

advancing to the ALCS!. Hoping for an

all-Texas ALCS. Looking at you Rangers.”

Heartbroken, I was ready to tip my hat

to the feisty south Texas team.

I smiled weakly, wishing I had her faith.

“We can still cheer with all our hearts,” I replied.

The odds of winning hovered at three percent.

Five singles, one error, one strikeout,

one walk, a groundout and —

the Royals took the lead.

as the away team.

A mad dash followed by

and the Royals won the

last game of the season.

◀Collision
One Swing Changed Everything▶