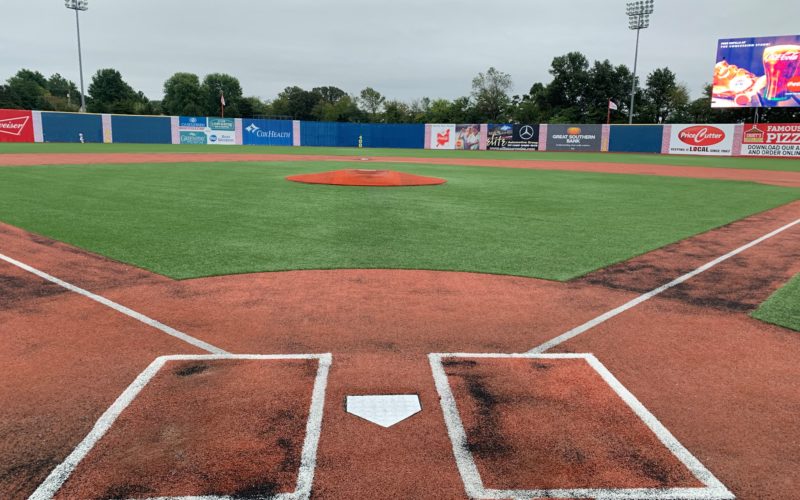 Josh Engler is a right-handed pitcher for the Republic Locos who throws the ball from somewhere beyond third base. What that means is this: when I need to start my swing, the ball is still behind my back.

I put a decent swing on a first pitch fastball and fouled it off.

A one-strike slider left me lunging, practically throwing my bat, and I laughed because now I knew why Salvy Perez swings at those same pitches. They look really good for a long time, and then they magically take a left turn and you think, “How the heck am I supposed to hit that?!”

Two strikes. Protect the zone. And, like Kit from A League of Their Own, I couldn’t lay off a high fastball. It looked as large as a pumpkin just begging to be barreled up, until it ran inside, tied me up, and sent me back to the dugout shaking my head.

Another strike out. Another failure.

I grew up afraid of failing. It was a self-imposed pressure. Maybe it is because I’m a firstborn child. Maybe it comes from not wanting to be embarrassed in front of other people. Maybe it stems from losing all of my hair at 6 and just wanting to make sure I still fit in with others. Who knows? This fear exhibited itself in all aspects of my life. I remember crying over receiving a B on my grade card. The subject? Handwriting. That B was a failure to me. The first time I tried out to play baseball for Kickapoo High School, I was cut. That failure was particularly hard to deal with. When I made the team the following year, I celebrated with friends and family.

A Year of Playing Catch just turned 1. I had big dreams for its first year.

I dreamed of seeing it on the New York Times bestseller list.

I dreamed of playing catch with Jimmy Fallon.

I dreamed of throwing out a first pitch for the Royals.

None of these dreams came true.

I still need to sell a few thousand more copies for the NYT to know that I exist.

I have no idea how to contact Jimmy Fallon.

I am still waiting on my call from the Royals.

After the game, which the Ducks won, I received words of encouragement from David in New York and Shane in Chicago and Mark in Morrisville.

The problem with failure is that it forces us to think in black and white. Yes or no. Either you succeeded or you didn’t.

If you don’t get straight A’s, you failed.

If you gave up the game-winning hit, you failed.

If you didn’t get the job, you failed.

Hank Aaron said it this way, “Failure is a part of success.”

Failure strengthens character. It encourages creativity, tenacity, and resilience. Failure teaches humility, which is so needed in today’s culture.

In 2021, Salvy Perez has 621 plate appearances. He’s struck out 158 times. He’s also set a new major league record for single season home runs by a catcher – 46 – driven in 115 runs and should get a few votes for MVP at the end of the season.

Babe Ruth said, “Never let the fear of striking out keep you from playing the game.”

God must have a goofy sense of humor, wiring me to be gripped by a game that’s predominant lesson is dealing with failure.

I might go 0-for-the-season. While I won’t be particularly joyful about that, it’s not time for me to hang up my cleats.

Because, even though Jimmy doesn’t know me and the Royals haven’t called, I’ve gotta get ready for a game next summer with my new friend Spencer at 42 Field. And I know David in New York is in the works of planning a baseball weekend, too. And there are high school ballplayers in need of new gloves from coast to coast. And come next fall, the Ozark Mountain Ducks are gonna want my bat in the lineup.

Like baseball, failure is a significant part of life.

◀The Quest For a Batting Average, Part Four
The Gift of Music▶