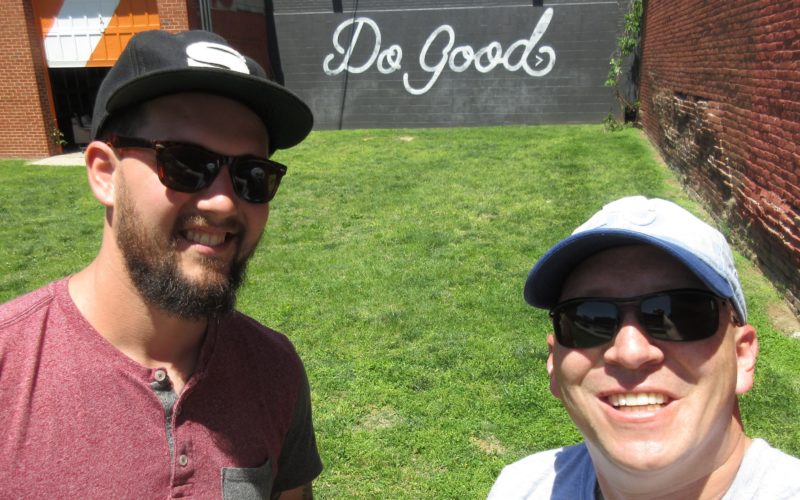 I know you’re not supposed to point. Growing up bald, I was on the receiving end of so many finger pointings. If I had a nickel…

My friend Aaron once joked that our church should be called “Beards and Babies” which is really funny because it’s true, even if I can’t grow a beard and my youngest baby is 13 years old.

Several months ago at church, while the band was playing and Kaylea was violining, I spotted a young girl with curly blonde hair just like Kaylea’s, just like Sophie’s, and memories flooded. In the middle of the song, I nudged Jamie and pointed.

Like the good wife and friend and deeply compassionate person that she is, she smacked my hand and glared at me, whispering, “Don’t point!” Of course, she was right. In the epic words of Roberto De Vicenzo, “What a stupid I am.”

That little girl was Dustin’s adorable daughter. A few years earlier, she had been born in his farmhouse one week after he and his wife Lacy moved in. Eleven acres on the north side of Springfield with a huge garden and sheep, chickens, goats, and a few pigs.

In 2015, on the day after Christmas, his farmhouse was struck by lightning and burned to the ground. Lacy was five months pregnant with their second child when the lightning hit.

“That was a real emotional roller coaster of uncertainty and changed our perspective on a lot of things. But we knew God is good and trusted God would take care of things.”

Dustin’s journey started in Texas. He’s made stops in Iowa and St. Louis before settling in Springfield, working as a youth minister and in behavioral health services and construction. He now owns his own wood shop on Commercial Street, designing and crafting beautiful furnishings.

“I’ve made my hobbies into my job. I’ve been really fortunate to take advantage of my creativity and entrepreneurial spirit and run with it.”

My wood shop skills peaked at a semi-warped cutting board for Mom and a poorly stained and quite shallow change bowl for Dad.

“I lost all my baseball stuff in the fire,” Dustin answered when I asked him if he had a glove. It was an answer that completely caught me off guard. I felt his words in my gut.

I do know that whenever the day comes and I die, I don’t get to take anything with me. I have no interest in being buried with my gloves; someone else will need them to play catch. I still like Danny Duffy’s sentiment, however, “Bury me a Royal.” It does seem rather appropriate that I’d wear home whites as opposed to an away uniform.

“And then we found our new farm.”

Fifty acres and a wedding venue.

We walked across the street from his shop and played catch in between two brick buildings and in front of the “Do Good” sign.

“Some friends and I played wiffle ball over here last summer.”

It is definitely one of my new favorite places to play catch. Each throw popped and echoed — even my knuckleball.

Once the bill of my hat was dripping from sweat, we called it a day.

As I cranked the A/C on my van, the “Do Good” sign sparked a synapse that reminded me of a verse written thousands of years ago.

“Whatever your hand finds to do, do it with all your might.” (Ecclesiastes 9.10)