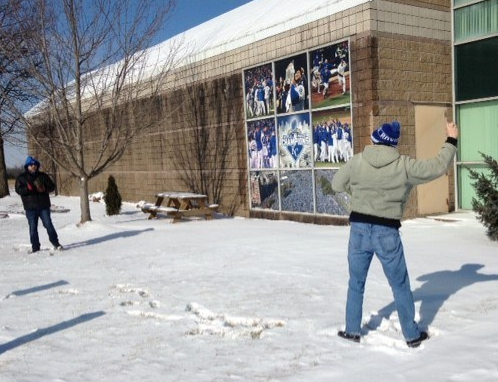 I first met Josh on YouTube, thanks to this incredible video about KC barbecue.

Josh is a red-bearded rapping elementary school teacher who is excellent at the chaotic card-game Nertz, Settlers of Catan, and The Resistance. He loves the Royals as much as I do and we celebrated the 2015 World Champion team by attending Opening Day of 2016 together. It was a marvelous way to kick off a new season.

Josh knew of the perfect location for us to have a game of catch: The Missouri Sports Hall of Fame.

Twenty five throws and three pictures in less than three minutes has got to be a record, probably because we were playing in ridiculously cold weather. Also for the record, I did work in one knuckleball in our game of speed-catch.

New record low for a game of catch: 0 degrees temperature, -15 degrees wind chill. I’m going to do my best not to beat it.