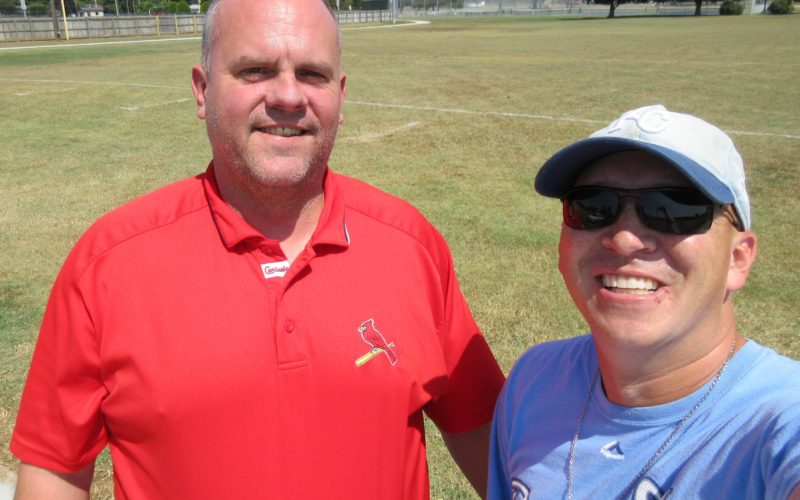 On the day Guy was born, his uncles were at a baseball game. One of them signed and dated the scorecard, “Happy birth date to Guy, Uncle Stan Musial.”

Guy’s connection to sports and scores was sealed from day one, with a Hall of Famer serving as witness.

“Dad had to be at the ballpark every Saturday the Cardinals were in town, so I joined him. Joe Buck and I were running around the stadium together and we might have done some things we weren’t supposed to, so they put someone with us to keep an eye on us.”

Guy is known throughout southwest Missouri and beyond for his Friday Night call in radio show and website with scores posted from teams all over. The title of his show and his twitter handle are both simple and brilliant: Scoreboard Guy.

“I cover girls’ and boys’ high school sports for the state of Missouri, as many high school teams as I can get.”

Meeting someone in person when you know their voice via radio is quite the unique experience. It’s happened to me more than once this year; there really needs to be a word for it.

The theme to Guy’s life story is overcoming.

He’s endured seven knee surgeries and broken every finger, “except for my left thumb.” The broken-throwing-hand-into-an-oncoming-face-mask is particularly horrible timing. As a freshman in college, Guy was diagnosed with cancer which was found due to a football injury. He overcame them all to keep playing.

Eight years ago, Guy was in an ATV accident near his farm in Bolivar. He can only tell the story second-hand. “One of the paramedics said they asked my wife to come ID my body, they were just going to keep me alive long enough for a positive identification.”

Cracked skull. Fractured ribs. Punctured lungs. He was in a coma for 12 days. When he originally came to, he was blind and paralyzed.

“I had to learn how to walk and talk again.”

Guy last played catch last year before throwing out the first pitch at the Shriner’s High School All-Star Game. He secretly hoped the radar gun would be on, but it wasn’t. If I get the chance to throw out a first pitch, I’m just hoping not to bounce it.

On this second day of August, a nice breeze blew and we played catch in the field behind Meador. We both remember playing games at the now team-less stadium.

“I know I’m here for a reason,” Guy said, following up with an appropriate sports analogy. “It’s like I’ve been in a basketball game, and then I make the shot with 2 seconds to go to send the game into overtime. I’ve got extra time and there’s a lot of responsibility that comes with it.”

I am quite aware and incredibly thankful for the time that new friends have spent with me this year — playing catch, sharing stories, having fun. Time throwing a baseball with someone else will never show up on a scorecard or after game report, but it is always time well spent.