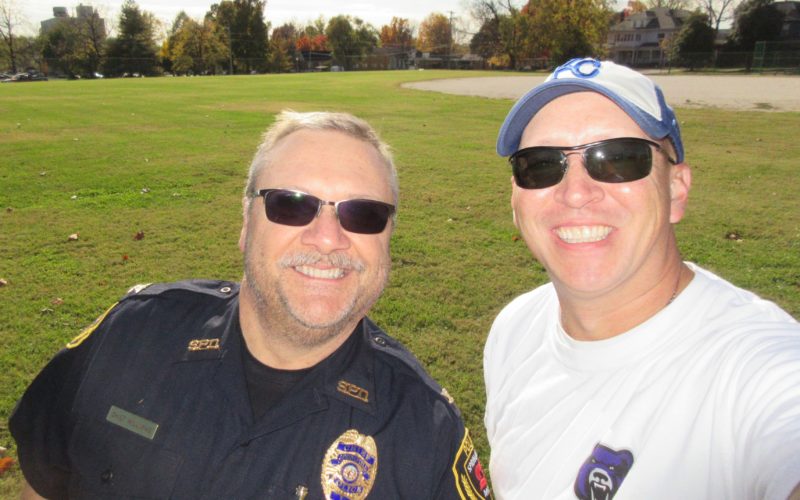 On the day we were originally scheduled to play catch, in the wee hours of the morning, there were multiple murders in Springfield. Since he is Springfield’s Chief of Police, Chief Williams notified me of his unavailability to meet as well as his desire to reschedule.

“They’re behind bars now,” he said. “You were able to find someone in my place, right?”

I affirmed that the catch-playing streak is still alive. Only 54 days remain after today.

Chief Williams grew up in Detroit and is a fan of the Tigers.

“I’ve got an Al Kaline jersey at home.”

A few years ago, he and his son went to Kauffman Stadium decked out in Tigers hats and jerseys, ready to cheer on the visiting team to victory. In left field, Joba Chamberlain and Joe Nathan were warming up, not too far from Chief and his son.

“And then Joe calls to get our attention and tosses Matthew the ball. Matthew throws it back and then Joba threw it.”

A game of catch broke out between players on the field and two fans in the stands at the K and Chief Williams was a part of it.

“It’s been about three years since I’ve played catch, though. Matthew switched from baseball to soccer.”

Like any proud dad, he adapted and now kicks the ball with his son, even attempting to block shots as a goalie. Still, he brought two gloves with him to catch.

Since coming to Springfield in 2010, Chief Williams has hosted “Coffee with the Chief” at various coffee shops throughout town. I’ve participated on a couple of occasions, if sitting at a nearby table and listening in can be considered as participating.

I got to the field north of Jenny Lincoln park early and warmed up with the new throwing toy from Coach Gum. It was a blast, even if the gusty winds made it somewhat a challenge.

Chief pulled into the parking lot and the first thing I noticed was his beard. He’s loosened the facial hair policy and encouraged the police force to participate in “Movember,” something else I’ll be watching from a distance.

“We want the officers to take their health seriously. They’re scheduling physicals, giving up tobacco, updating wills. I’m giving up bread for the month.”

Police work runs in his blood. Both his dad and grandfather served in Detroit, and Chief Williams served as an officer in Tulsa for 29 years before retiring. When the position opened in Springfield, he applied and worked through the four-month interview process to earn the title.

Jasmine, the new police spokeswoman, showed up to officially document the effort after we had already been tossing the ball for a while. Once pictures were taken, she kicked off her shoes and joined in, using Chief’s second glove. On what may be one of the last nice days for quite some time, the three of us laughed and shared stories of life, “boring” baseball, and cheesy chick flicks.

Chief’s stories about throwing out first pitches for the Springfield Cardinals were awesome, but the story that really made me laugh was the one about Officer Boomgaarden (Day #54) standing outside his office window asking Chief if he wanted to build a snowman.

I’m hoping to track it down.