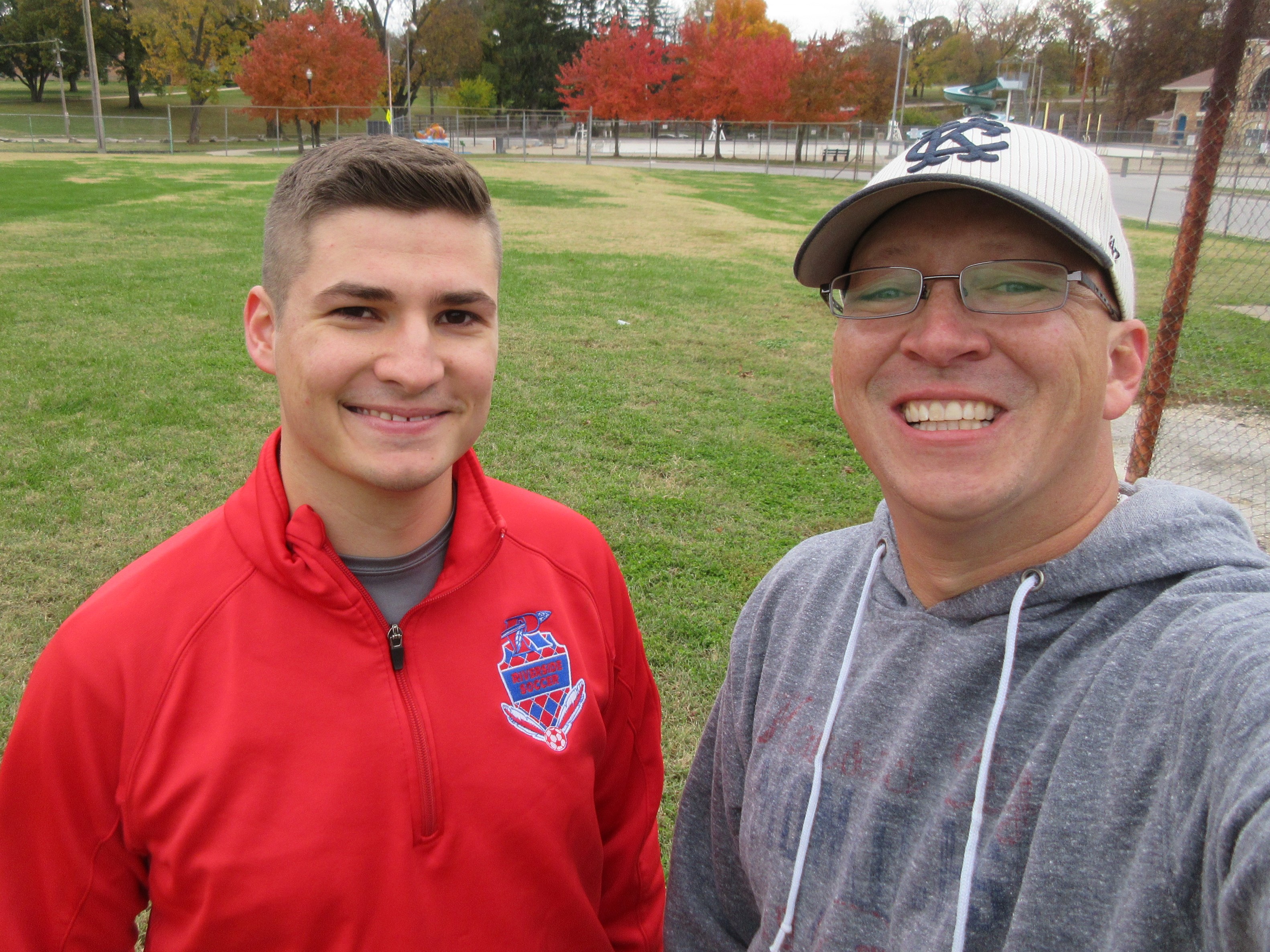 The electronic billboard said the temperature was 44 degrees, but I’m pretty sure it was lying.  Hypothesis: I fully expect there to be feet of snow on the ground before Thanksgiving. Whatever the real temperature happened to be, Matt agreed to play catch.

Matt is new to Springfield, moving in July after earning his journalism degree from Mizzou. One of the first things he did upon moving to town was attend a Springfield Cardinals game just as a fan. The couple sitting next to him bought him food from the concessions stands as a welcome to town. Originally from South Carolina, Matt’s now a sports reporter with KOLR-10.

“Here in Springfield, there’s the Cardinals and high school football and everything at MSU and now the Chiefs and it’s just been four months of running.”

I spent the spring semester of my sophomore year on a study-away program at the University of South Carolina. I ate wings and cheese grits and worked as a senate page in the South Carolina State House when the Confederate flag flew on top of the building. I said something about the flag on my first day of work and was told it was on its way down. It came down in 2015. I also once served a donut to Strom Thurmond.

“I miss cheese grits,” Matt said. “I’ve been hunting for a good soul food place in Springfield. My baseline for a place is, ‘Do they have collards?’”

Matt has already interviewed Adam Wainwright when he was here on rehab. Waino strongly recommended a visit to Bass Pro and City Butcher. While I was playing catch with Tim and Raj, Matt was interviewing Ryan Howard at the MSU Alumni Game.

“I interned for ESPN up in Bristol, Connecticut the summer before my senior year. The only person I had to get a cup of coffee for was Nick Saban. Predictably, he liked it black. The biggest surprise to me was how open door everyone was. It was a great experience.”

Matt loves all things about sports and cheers for the Panthers, Braves, Hornets, and Atlanta United.

“I like the stories of sports. I remember watching people as a kid and thinking, ‘Each one of these people has a story just like mine.’ And I found that my favorite stories were always in the realm of sports, the best stories of human nature. Sports melts away a lot of the issues of the world and focuses in on one single moment. But the issues of the ‘real world’ are also played out through sports. In those moments, when you see the issues on the field, is where the journalism of sports journalism comes though.”

It hasn’t been too long since Matt played catch.

“I played on a softball team this last summer.”

We met at Fassnight Field as the temperatures dropped and talked all things sports and South Carolina. I made him pick one athlete as a hero.

“Steve Smith of the Panthers was my guy growing up. He embodied a phrase my dad always said to me, ‘It’s not the size of the dog in the fight, but the size of fight in the dog.’”

After 20 minutes, my fingers and ears were starting to get cold. We took a quick selfie as the first few drops of rain began to fall.