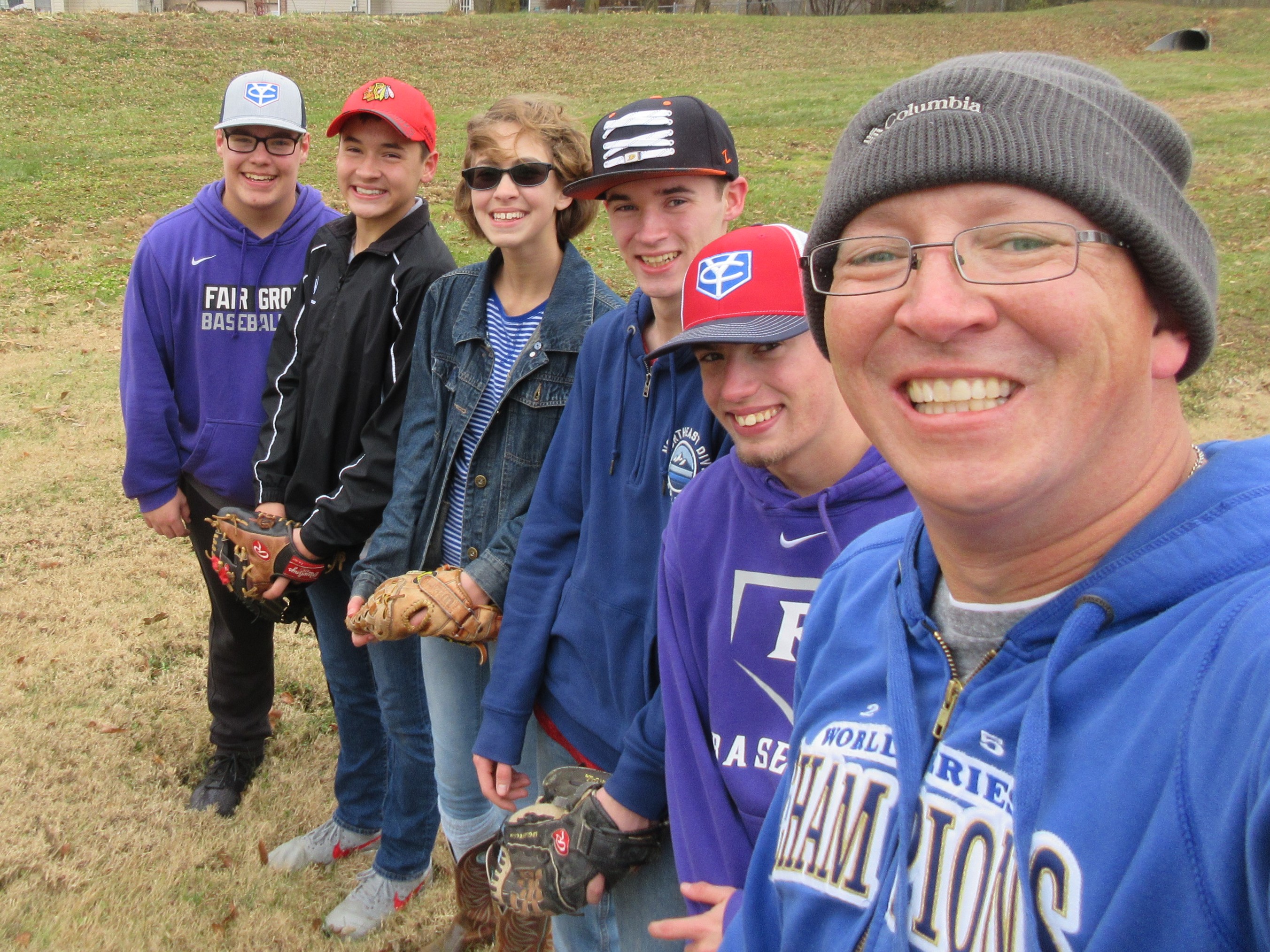 The wind blows wherever it pleases. You hear its sound, but you cannot tell where it comes from or where it is going.

The wind makes splitters drop and pop-ups carry and curve.

Springfield was under a wind advisory as a cold front of wintery weather blew in. With gusts over 30 mph, I was thankful for “the ditch,” a drainage pond with sloped walls 6 or 7 feet tall that blocked a significant portion of the wind. Even so, Landon’s hat blew off a couple of times.

“I tightened mine,” Asher said.

I traded my Monarchs hat for a toque that would cover my ears.

Gabe, Jaden, Asher, and Landon are cousins who cheer for a variety of teams.

Gabe is the oldest, a junior who participated in the collegiate showcase at CY Sports a couple weekends ago, the same day I played catch with Keilynn (Day #307). A middle infielder, he cheers for the New Orleans Saints and the Cardinals.

Jaden is also a junior and also cheers for the Cardinals along with the Philadelphia Eagles. He’s a catcher and goalie on his ice hockey team. More about that later.

Asher is a freshman, a shortstop, and a devoted fan of the New England Patriots and San Francisco Giants. Thankfully, he has a good sense of humor and can handle all the ribbing he takes for supporting coastal teams while living in flyover country.

Landon is the youngest, an 8th grader, who loves the Denver Broncos and Cardinals. He, too, is a catcher who pulled double duty last summer, catching the first game of a doubleheader and then pitching the second. (Landon, do some research on Ted “Double Duty” Radcliffe. You’ll enjoy his stories. Especially the one where he threw out Ty Cobb trying to steal second.)

After filling our bellies with hot dogs and chili, the four cousins and I walked to the ditch for catch. Jaden and Asher’s dad, Gary, joined us wearing Jaden’s goalie glove and Sophie used the George Brett glove.

For close to 30 minutes, the seven of us played catch. I tried the goalie glove for a little bit which was the heaviest glove I’ve ever worn. I have no idea how someone can use one of those gloves while standing on ice. My normal glove felt incredibly light afterwards.

Around the horn clockwise, counterclockwise, relay throws, pop-ups, grounders, and every other kind of throwing drill you can imagine, we kept the ball moving and kept our hands warm as the temperatures dropped.

A brief pause for dessert and to warm up fingers, then Asher and Gabe took turns playing catch with me using the old Wilson glove.

And then the cold rain came. Game over.

Even though football was on TV, we were all in a baseball mood after today’s game of catch.