The Moon City Mavericks are the 2021 champions of The Grip’N’Rip Baseball League.

Which means the Ozark Mountain Ducks are not back-to-back champions.

Which means this is a story about my team losing the last game of the season.

Managing the Los Angeles Dodgers from 1976 to 1996, Lasorda took the team to four World Series, winning two and losing two.

He speaks from experience.

The easy thing to write would be, “That’s baseball,” or “There’s always next year.” Only one team wins the last game of the season, the rest of us go home and reflect on the season. Some players decide it’s time to hang up their cleats, some are motivated to work in the off-season in hopes of doing the little things to help their team next year, and some are unpacking boxes of books for the foreseeable future.

In Game 6 of the 1986 World Series, a routine ground ball rolled through first baseman Bill Buckner’s legs, leading to a New York Mets victory, a Game 7, and a Mets championship.

In the first inning of the 2021 GRBL championship game, the same thing happened. With two strikes, Mavericks’ lead-off hitter Nick Bacon hit a grounder to first which checked and skipped off the turf and between the legs of Austin Kendrick.

Austin is one of the most sure-handed first basemen I know. Austin made three brilliant picks at first base just during the championship game, my favorite one coming off the arm of Hall-of-Fame-Gold-Glover Caleb Cole who yelled, “Pick it!” as soon as he threw it.

The ball off the bat of Bacon was quickly recovered, but the lead-off runner was on.

Clay was a teammate of mine on the 2020 Champion Mountain Ducks. I quickly became a fan watching him work on the mound, then loved learning from him as he coached and encouraged the other Ducks pitchers. We have messaged throughout the year, talking about baseball, of course, but also all of life. He offered moving advice and I’ve joked about what it would be like stepping in the batter’s box to face him.

As good as Clay was in 2020, he’s been even better in 2021. In 20 innings pitched, Clay has allowed 8 hits, accrued 26 strikeouts, and walked no one. No earned runs. No ERA. Pretty much, he’s had a season of perfect pitching.

This is called foreshadowing.

Clay hit a one-hop chopped grounder to Mark at third base.

Mark has made several brilliant plays at third base this season, a few of which I’ve written about in previous posts. Here’s another.

With one out in the third inning, Zach Ralph hit a sharp grounder down the third base line. Mark took two steps toward the line, then slid on his knees to field the ball. He popped to his feet and fired across the diamond to get the speedster by half a step. It was an incredible play worthy of future gold glove consideration.

Back in the first inning, with nerves high, Mark’s instinct was to turn a double play. But he peeked at Bacon running from first before he caught the ball, bobbled the grounder, and both Bacon and Clay were safe.

Much like the 2015 Kansas City Royals, the 2021 Moon City Mavericks know how to capitalize on defensive miscues. They followed up the two errors with a run-scoring single, a strike out, a hit-by-pitch to load the bases, a run-scoring groundout, and a strikeout. By the end of the first, the Mavericks were up 2-0.

The Ducks had their chances to score throughout the game, getting runners on base in each of the first five innings. In the top of the fifth, rookie outfielder Tyler Tate, one of the hottest hitters in the league late in the season, on an 2-2 count, put the Ducks on the board with a solid single to left-center scoring Travis Lee who walked to start the inning. At the end of five innings, the score was 3-1. 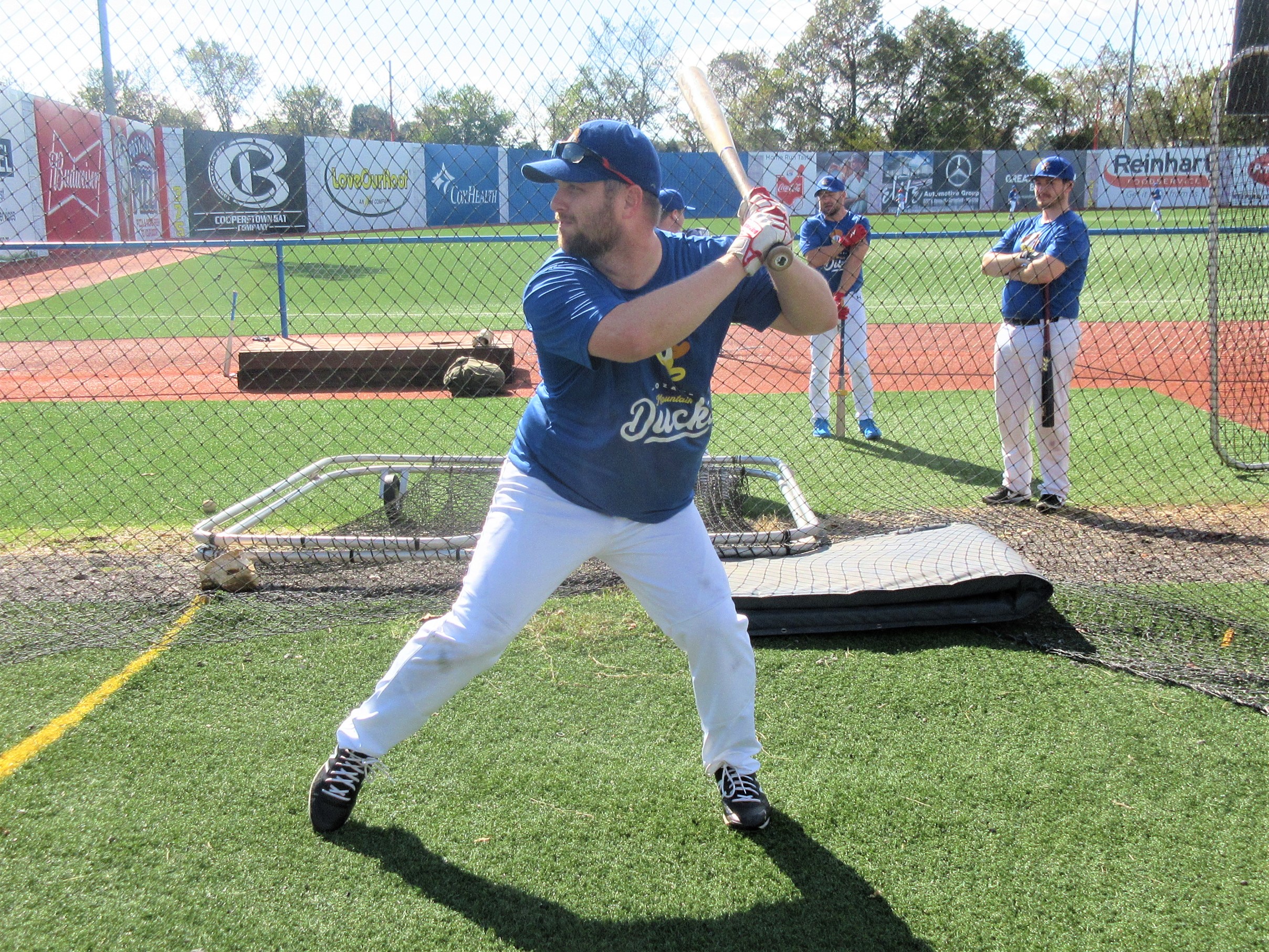 The top of the eighth started with Clay striking out Caleb. Tyler reached base for the fourth time in the game — three singles and a walk — with a perfect bunt up the third base line, but a sharp grounder to second off the bat of Nick Young resulted in an inning-ending double play.

The Mavericks weren’t able to do anything against Nick in the bottom of the eighth. With the Ducks down to their final three outs and down by three runs, Murphy returned to the mound. Mark was set to lead-off the top of the ninth, followed by me as a pinch-hitter.

Mark broke his second bat of the game on an inside fastball and grounded back to Clay for the first out. As Mark walked back to the dugout amid fair-foul ball controversy, I made eye contact with Clay and tipped my helmet. He smiled and nodded in response.

I heard my walk-up music, aware it was the final time I’d hear it in this context this season.

I dug in, a couple waggles of the bat, and I focused on Clay. Facing Clay as a pitcher is like facing the final boss in a video game.

The first pitch was a fastball. Outside.

After the game, Clay told me, “That first pitch had some hair on it, didn’t it?” And then in reference to his entire outing, “That may have been the hardest I’ve thrown all year. Probably since high school.”

I am accustomed to swinging at first pitch fastballs. I watched the first pitch and had two thoughts.

Thought number one. I saw that. I can see this. I can hit this.

Thought number two, with cartoon-character big eyes. That was FAST!

I stepped out, took a breath, and stepped back in. 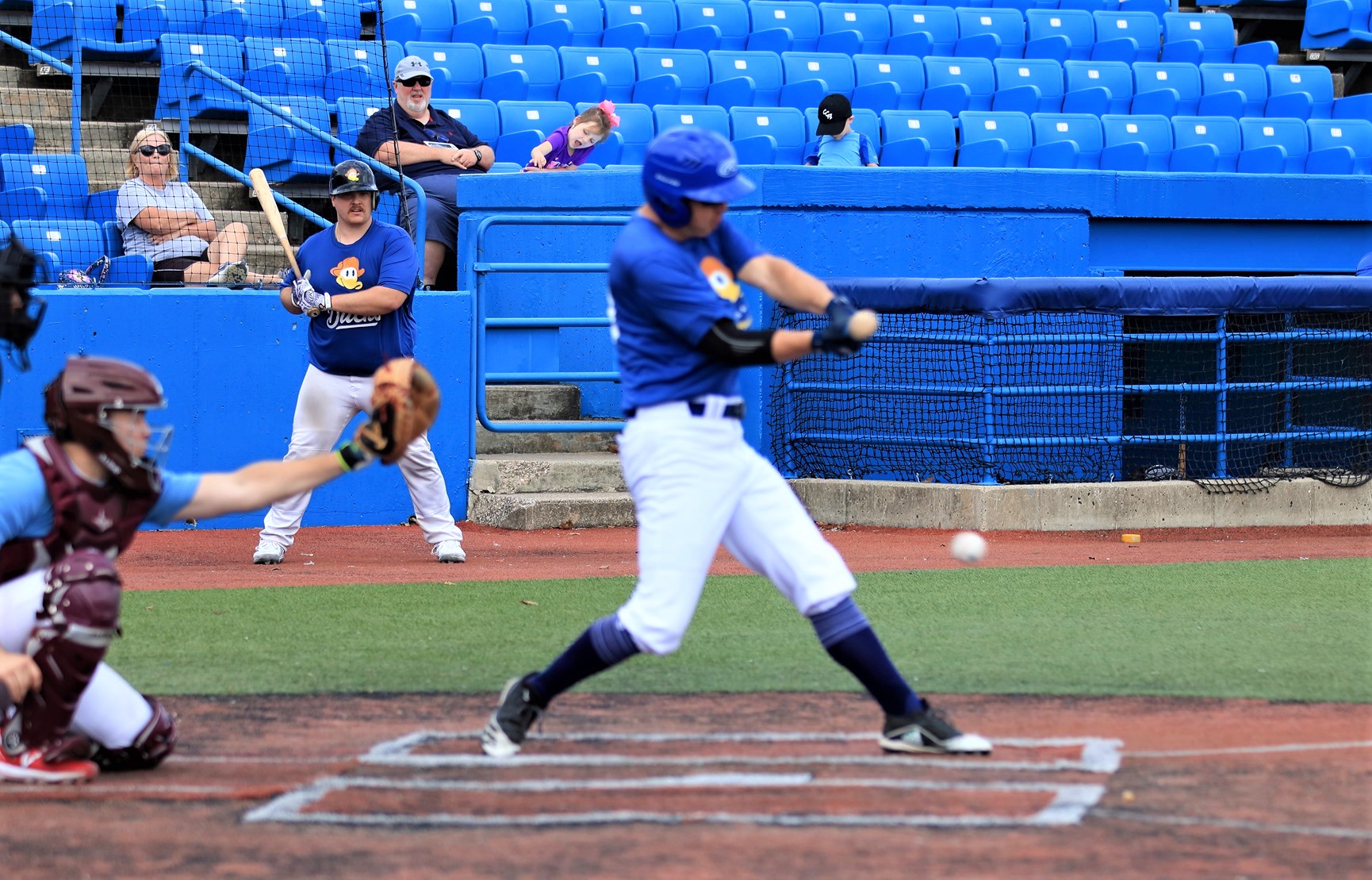 The second pitch was a fastball and I put wood on the ball, hitting a two-hop chopper toward second base. Mavericks second baseman Matt Spangler thought 16-year-old me was running to first instead of 47-year-old me and rushed the throw to first, throwing low, where it was bobbled and I was miraculously safe. It wasn’t a hit, but I’m certain that it’ll morph into a laced single in future retellings (in another 15 years or so). I was lifted for a pinch runner, and promptly pounded and congratulated by all of my teammates in the dugout — all because of someone else’s error.

Ducks’ catcher Trevyn Batey promptly singled to left, his second time singling off of Clay in a championship game, putting two runners on and bringing the tying run to the plate.

The Ducks refused to give up.

And then Clay went to work. A high chopper back to the mound moved the runners into scoring position, but also resulted in the second out.

Clay Murphy sealed the Mavericks victory with a strikeout.

Before the game, I went and stood in left field with my camera to take in the scenery of the beautifully windy day.

This past week, I practiced at both Meador Park and the Neil Pittman Field at Kickapoo High School. At both of those ballparks, I felt reasonably confident that I could make a good strong throw near the plate.

The phrase “out of left field” is now commonplace slang for odd or unusual or unexpected. The origin of the phrase is not really known, with some theories pointing fingers at the music industry, and some claiming a mental institution behind the left field fence of a ballpark in Chicago.

Heading into the off-season, I have a couple out-of-left-field thoughts.

I think The GRBL should form a team, just like the Negro Leagues teams used to do in their heyday, and go barnstorming, traveling to other communities to play in charity games. Maybe big cities like KC and St. Louis, or towns like Joplin and Bentonville. Or maybe a road trip to the Field of Dreams.

Of course, we’d play ball, maybe even a double header if time and bodies permitted. And then there would be some kind of banquet or celebration involving food and Dr Pepper where funds raised would be distributed and younger ballplayers could get new gloves, and I could tell a story or two about baseball and life.

The conversation in our country has grown so divided in recent years. A simple game of baseball can give us space and time to connect around what is good and meaningful.

This thought plays off the first one and is completely selfish. I’d like to be The GRBL’s Catch-Playing Ambassador of Baseball and Goodwill. That’s a very long title which simply means I’d like to go play catch with people and encourage them to come play ball with us. I could speak at businesses or churches or colleges or schools and talk about why play is important, how play is necessary for our mental health and helps us to be the best version of ourselves. Maybe so many people sign up that the league has to expand, which would be cool, which sounds like a logistical nightmare. As long as I’m an Ozark Mountain Duck forever…

In my mind, in order for this second thought to become a reality, I need a new glove. After a year of playing catch and three seasons in The GRBL, the now 31-year-old George Brett signature model Wilson is getting quite thin. Plus, as someone who used to be a pitcher and second baseman, it’s time I had an outfield glove to hold down the fort in left field. Instead of having my name etched in Sharpie across the thumb, I’d get the nickname given to me by the voice of The GRBL, Rance Burger — “Mr. Catch 365.” 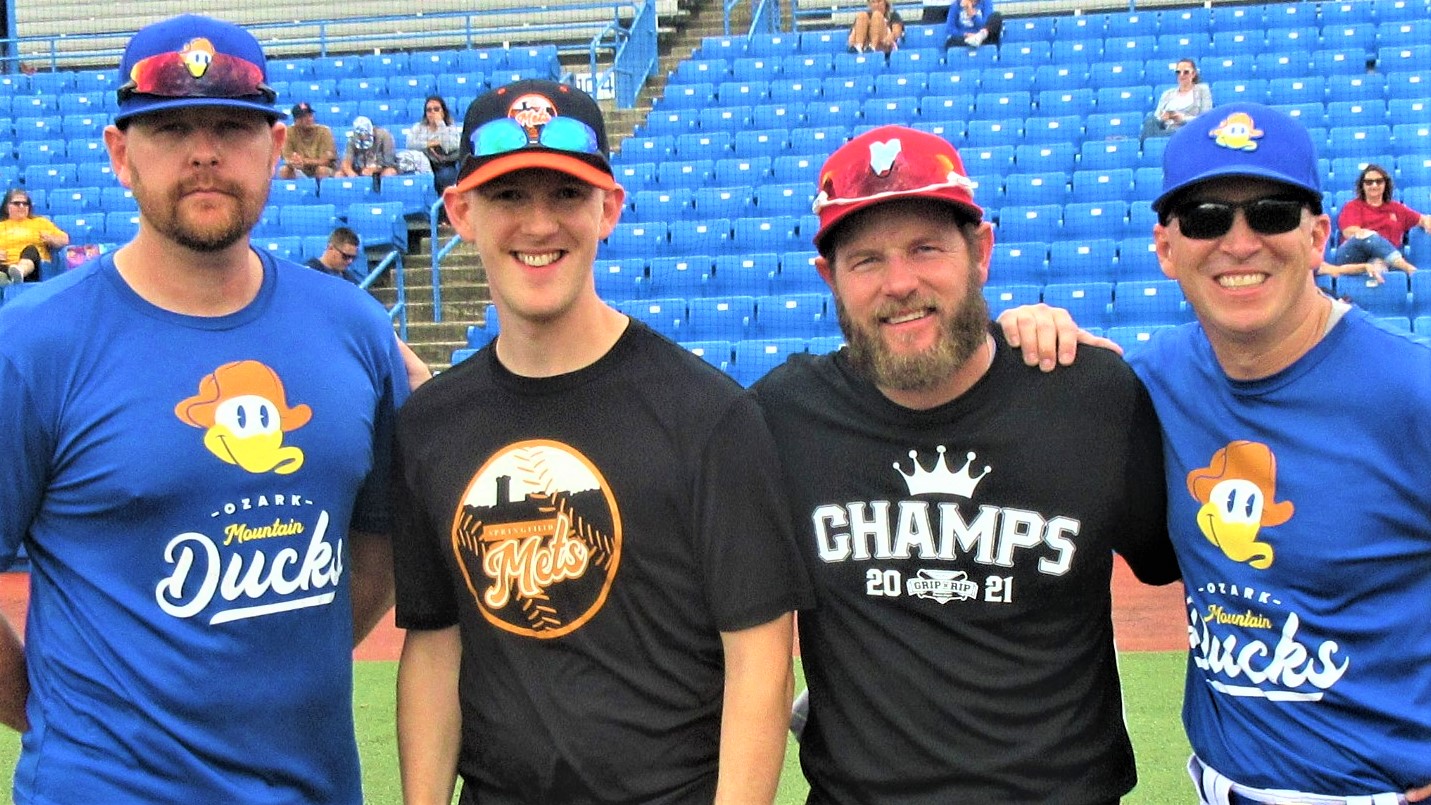 It was Hall of Famer Rogers Hornsby who famously said, “People ask me what I do in winter when there’s no baseball. I’ll tell you what I do. I stare out the window and wait for spring.”

This off-season, I’ll be in touch with the Friday morning practice squad. If weather looks favorable, we’ll be trying to take some swings and chase fly balls and field grounders, all the while re-telling the stories of our seasons playing in The GRBL.

Congrats to the Moon City Mavericks and to Jerry, the latest member of the Friday morning practice squad to ring the Howard Bell Trophy. 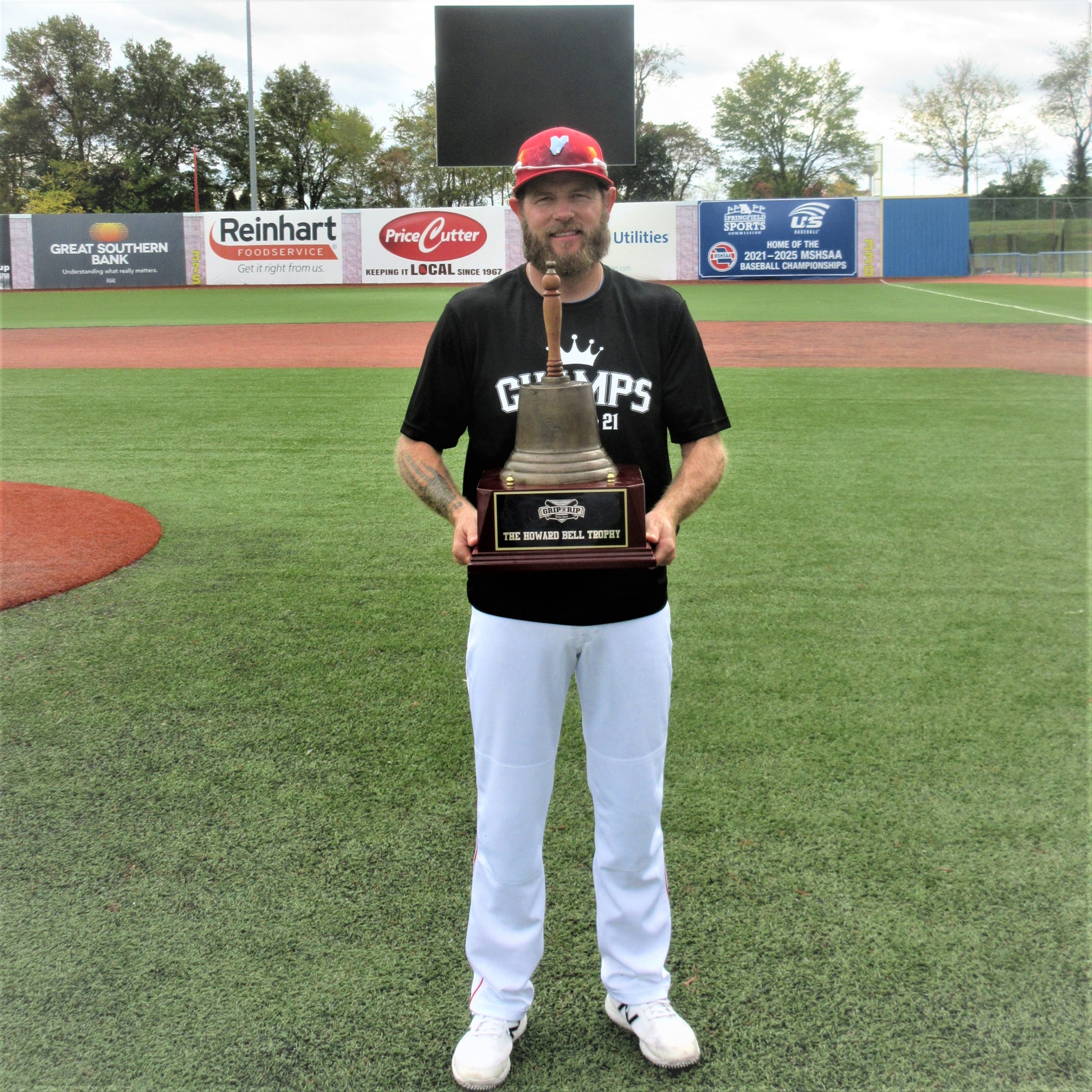