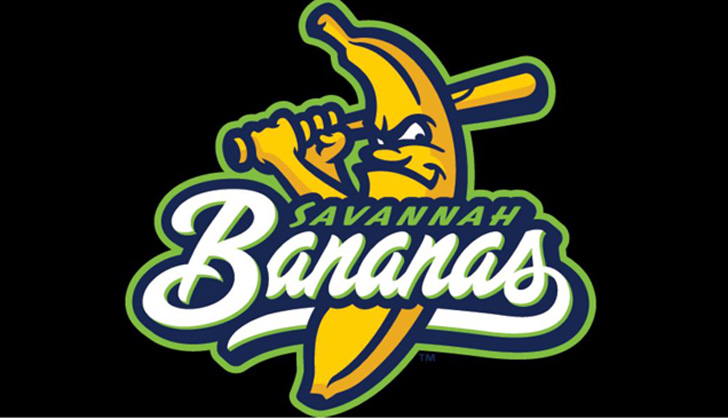 On May 6, 2022, the Savannah Bananas will be traveling to Kansas City to play the Monarchs in an exhibition game of Banana Ball, a creative re-imagining of the game I have loved the entirety of my life.**  The game will be a battle of championship teams.

The Savannah Bananas are the 2021 champions of the Coastal Plain League.

The Kansas City Monarchs are the 2021 champions of the American Association.

The game will be played at Legends Field which is one of the places I played catch on the final day of Catch 365. I wasn’t actually able to go on the field, it was raining and snowing and quite yucky outside. (“Yucky” is a technical term for Missouri weather in December.)

The Bananas do a great job bringing people together through the game of baseball. Their games are sold out and no one dares leave the stadium early for fear of missing out on the action, on the field certainly, but also in between innings. Dancing and games and all kinds of creativity passionately demonstrating the Bananas’ motto — Fans first. There is laughter in great abundance and memories are made as the Bananas are convinced that baseball exists for the fans. And when the fans are thoroughly entertained, when the fans are having fun, those on the field actually play better.

Putting fans first is good for baseball. I know of another league — ahem, MLB — that could learn a thing or two from the Bananas.

The Savannah Bananas do not currently have a 47-year-old benchwarmer, catch player, and reserve outfielder on their roster.

I think, maybe, they need to acquire one particular 47-year-old for their game in Kansas City.

At this game, I would play catch with kids in the stands in between innings.

I would commission my daughter to paint an old glove to be auctioned off during the game to support the Bananas Academy.

And, of course, I would be ready to enter the game as a late-inning defensive replacement. Hopefully, I could have my Moonlight Graham moment.

Why would the Savannah Bananas want me on their team?

Why would the Bananas want a former high school junior varsity player making certain the bench is the proper temperature?

Why would the Bananas need someone more than twice the age of all the other players doing his best to ensure that spirits are always good and heads held high?

Because I, too, know a few things about bringing people together through the game of baseball.

The catch-playing year and giving away gloves to younger ballplayers have taught me about the wondrous and contagious joy that can be experienced with just a little creativity and perseverance.

As I played catch, my curiosity was piqued, and I learned about all aspects of life on this beautiful ball of dirt, making hundreds of new friends. Taking the time to connect through throwing a ball created a sacred space where worries and fears were placed aside and hopes and dreams were shared. The daily rhythm of intentionally stopping to play shaped every fiber of my being. Every single day, I could not wait to play catch. It was over the course of the catch-playing year that I learned that we live in a severely play-deprived culture. As one 2019 study summarized, “More than 75% of children under 12 are not getting enough free, active, playtime.” This time to play is a crucial part of what it means to be human.

In our play-deprived culture, I know that finding ways to invite people into play is a powerful way not only to connect and make new friends, but to bring physical and emotional healing and to see the world through the lens of hope.

I think the Bananas’ motto is exactly how the game should be played. Put on a good show for the fans, and good things will happen on the field. Focus on having fun in the dugout and in the stands, and fun baseball will follow.

I understand the high calling and privilege of being a Banana. Bananas are thoughtful ambassadors of the game who bring joy and hope to strangers. Bananas aren’t afraid to embarrass themselves for the sake of encouraging and entertaining someone else. Owners Jesse and Emily have given their lives to make certain this team is successful, that the Bananas brand represents the finest in the art of baseball entertainment.

If I were chosen to be a Banana-For-A-Day, I would use the skills learned from my teammates-for-a-day and commit to organizing a Banana Ball Charity Game, where proceeds provided new gloves for ballplayers attending the Bananas Academy. Then, once the gloves were purchased, I’d travel to Savannah and participate in a Bananas Academy as well as a storytelling for Bananas fans. I’d offer to do a book signing, too, where proceeds further helped young ballplayers in Banana Land.

So, what do you say Savannah Bananas?