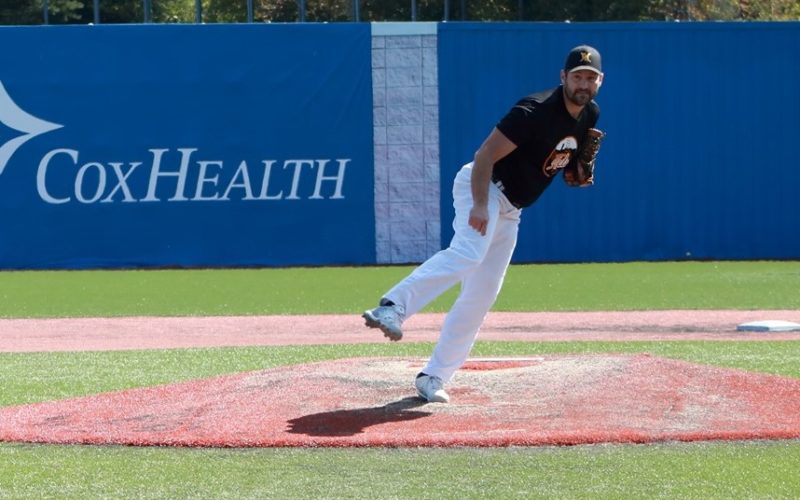 After the first game, I grabbed a cheeseburger, fries, and Dr Pepper and tried to find a warm seat to watch the second semi-final game featuring the Springfield Metropolitans and the Branson Showmen. By game’s end, the temperature was 44 degrees, with a wind chill in the upper 30s. That’s as far away from baseball weather as I am from joining a mission to Mars.

I had friends in both dugouts. In the visitors’ dugout, wearing Showmen purple, were my number twin Grady Goodwyn and Dr. Colin Barker, friends who had worked out on Friday mornings in preparation for GRBL tryout day all summer long. Joining them were Catch 365 partners Tony Lewis and Ben Hammitt. For the black and orange Mets, former Cyclones’ teammate Jared Braschler — surprisingly absent from this game — and catch partner Chandler Veit, along with my hugging friend David Rodriguez, but that’s a story for later.

Chris Matlock was the starting pitcher for the Mets, Joe Juarez his opposite for the Showmen. After Matlock struck out Ben Hammitt to start the game, Juarez singled, Ben Van Gorp (BVG) walked, and Kyle Poynter got a wind-aided single to load the bases. Matlock answered by striking out Trenton Ipock (the Thor of the GRBL) and getting commissioner-manager Tony Lewis to ground out to second. No score after the first half inning.

Juarez also struck out the first batter he faced. Colin got his first start in centerfield as the Showmen were also missing their usual centerfielder, David Travarthen. As so often happens in the game, the ball finds the new guy immediately, as 2019 GRBL MVP Jose Vargas skied one his direction. Colin fielded it cleanly for the second out. David Rodriguez then grounded out to second on the first pitch he saw. Juarez worked a one-two-three first and it looked like a pitcher’s duel was underway.

The second inning yielded only one runner and no runs between the two teams, the pitcher’s duel continuing. And then the third inning happened. The remainder of this recap will focus on all the scoring plays.

In the top of the third, the Showmen again put multiple runners on base with only one out. This time, Kyle Poynter hit a deep drive to left field, one-hopping the fence with a two-RBI triple. Ipock followed with a single to make the score 3-0 going into the bottom half of the inning.

Zach King laced a liner back up the middle, but Juarez leaped off the mound and snagged it for the first out. The Mets then answered with a walk and triple of their own, Braian Lopez Rivera driving one just past a diving Colin in left centerfield. Pitcher Chris Matlock stepped up to the plate wearing no batting gloves, which could have been a tribute to George Brett and Matt Carpenter, or, more likely, that he didn’t anticipate hitting. Off a Juarez slider, Matlock sent one to right field. The right fielder and second baseman collided as they each tried to make the play and the ball bounced away. Matlock stood safe on second with the deficit cut to one run. With two outs, Jose Vargas laced a line drive to right center, tying the game, as he slid into third. Rodriguez then singled to left and the Mets had their first lead. The Mets loaded the bases before a pitching change was made. New pitcher Andy Galle threw one pitch to Trevyn Batey who grounded in to a fielder’s choice to end the inning.

After three innings, the Mets were up 4-3.

Matlock worked a quick top of the fourth and then helped himself in the bottom half of the inning, driving in another run on a single to centerfield. Galle struck out two in a row to end the scoring threat, but the Mets had increased their lead, 5-3.

Hammitt singled to start the fifth inning and stole second a hitter later. With two outs, Poynter hit another big fly to left field, but King made the catch and Matlock’s five innings were finished with his team in front.

Mets manager Brock Chaffin singled to right to once again get the line moving. Aquaman, the shark-wrestling Wonders of Wildlife marine biologist and Mets first baseman Toby Yorks, hit a soft grounder to third. A quick throw to second hit Brock, who spotted a now open third base and alertly and safely advanced, putting runners on the corners. Trevyn Batey stepped up to the dish. With the count 0-2, Batey was hit by Galle’s pitch in the back. After some vocal persuasion from the Showmen, the umpire declared that Batey leaned into the pitch and made him return to the plate. On the very next pitch, Batey laced a double to left field, scoring one and putting runners on second and third. Galle again got the last two outs, but the Mets increased their lead, 6-3.

To start the sixth inning, Chandler Veit, wearer of high socks and hurler of the league’s best Bugs Bunny curveball, took the mound. I was sitting next to Isaiah, Grady’s oldest son, when Chandler threw one of his signature 12-6 curves. “Whoa,” was all Isaiah could say in response. I have faced that curveball in person. It is definitely whoa-worthy.

Thor-Ipock reached base on an infield single and then went to second on an fielder’s choice groundout to second. Andy Galle then prepared to take his swings and singled to left, driving in Ipock. Galle advanced to third on a couple of throwing errors. With the infield in, Jose Vargas made a great play, keeping the runner on third and securing the second out. Michael Esther hit a solid grounder up the middle, under Chandler, and the run scored. Grady followed Esther and I was so nervous for him, even if I teased him for his choice of walk-up song. Like Esther, Grady hit a grounder up the middle, but Vargas stopped it from going to center and threw him out at first to retire the side. Showmen trailed by one, 6-5.

Still facing Galle, Rivera singled, Chandler bunted him to second, and Joe Emory put runners on the corners with a single to deep short. Vargas struck out after a lengthy battle for the second out of the inning. And up to the plate walked David Rodriguez.

When the Ducks played the Mets, the Ducks were positioned in the visitor’s dugout. I’m not certain who was hitting, but they hit a high foul ball toward third base. Those of us in the dugout craned our necks trying to determine if it would, in fact, reach the stands or curl its way back to the playing surface. I leaned against the railing convinced the ball was in the stands and turned back toward the field just in time to see Mets third baseman David Rodriguez running my direction, full steam ahead. He slowed himself down a little bit, and completed the stop by reaching out to hug me as the ball landed a row or two behind the dugout. Because of angles and other players yelling, I neither heard nor saw him coming until I felt him grab me.

And that’s how I met David Rodriguez.

Rodriguez drilled a deep double down the left field line, driving in two, and Chaffin followed him with a single to center, scoring Rodriguez. By inning’s end, the Mets were up 9-5.

“And now they’re putting the game away,” Isaiah said.

“There is no way I’m counting the Showmen out of this game,” I replied.

The Mets had scored in four consecutive innings. It was time for the Showmen to cut into the lead. But Chandler’s curve kept the Showmen guessing and they were retired in order heading into the seventh inning stretch.

In the bottom of the seventh, Kyle Poynter took over on the mound and I spotted Grady in right field, which meant that someone was hitting the ball to right because he is a magnet for the ball. Now playing under the lights, Trevyn Batey got hit for the second time. This time, he was rewarded first base for his pain. King followed up with a fielder’s choice ground out, with Batey getting forced out at second. King stole second and took third on a bouncer back to the pitcher by Ben Makela. A line out to Ipock at third ended the inning. The Mets couldn’t add on to their lead.

Poynter lead off the top of the eighth, Veit’s last inning to pitch. He tripled to right field, a one hopper off the fence, and then scored on an errant relay throw into the visiting dugout. Ipock followed with a walk and Tony Lewis stepped up to the plate. Ipock advanced to second on a wild pitch, but was too aggressive rounding second. The catcher threw behind him and Vargas put the throw to third on the money, for the first out of the inning.

Tony then crushed a ball off the fence for a stand-up double. Ipock would have scored easily. After a pop-out to first, Tony scored on Riley Hamilton’s single to left field. A fly out to center ended the inning, but the Showmen had cut the deficit to two, 9-7.

“Told you,” I said, elbowing Isaiah, though the score could have been 9-8. That’s just how baseball goes.

Ben Van Gorp took over the pitching duties in the eighth and the first pitch of the inning was lined to Grady, who easily caught it. The Mets tacked on a run on Brock’s RBI single to center, a three-run lead with three outs to go.

In the top of the ninth inning, Jose Vargas took the mound for the Mets to close the game. Grady was the first one to face him as the rain picked up. Grady laced it, but straight to the new shortstop, my hugging friend David Rodriguez. Ben Hammitt followed with a groundout to third and Joe Juarez flew out to Ben Makela in right field.

The Mets won, 10-7, setting up a Ducks and Mets championship game on Sunday, October 25.