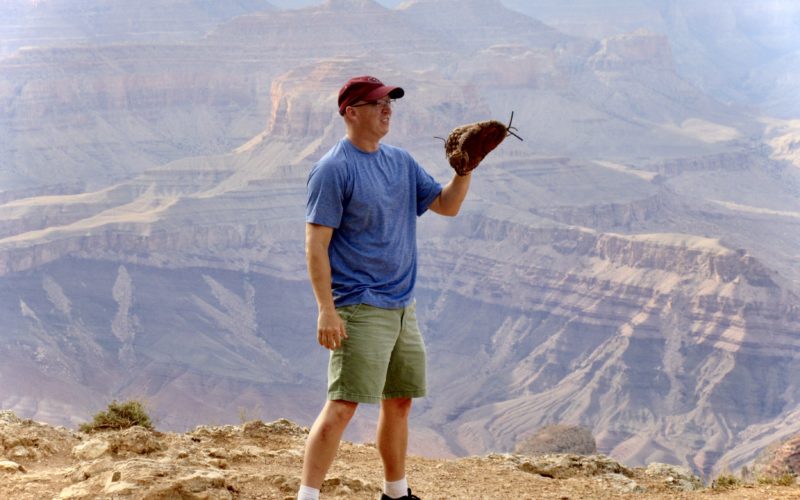 The first year I tried out for the Grip’N’Rip Baseball League (GRBL), I was on the heels of completing the catch-playing year. Several of my catch partners had played in the GRBL in seasons past and I was greatly intrigued by their stories of getting back on the field.

Thanks to months of coaching and help from Mark Blehm, a baseball miracle occurred. I made the cut.

At the banquet where I met my teammates and signed a contract and got paid and picked up my hat and jersey — number 10 — GRBL commissioner Tony Lewis approached me and said, “Congrats today. It took courage.”

I don’t think of myself as a courageous person. The truth is, I have been afraid most of my life.

At school, I was always afraid of failure, whether on a test or in front of others. My obsession with good grades was driven by a desire for a good collegiate scholarship and to keep failure at bay.

And I was constantly afraid of rejection, whether from girls or when trying out for a team. I know firsthand how it feels to be one of the players who didn’t make the cut.

Courage is an old word, with its origins in Latin. Courage is literally leading with the heart. The heart, seen as the seat of the will, must take over when our minds balk at tasks and callings that seem impossible. Like trying out to play in a baseball league after 25 years of sitting and watching passively in the grandstands.

It is impossible to count how many times I’ve been discouraged, because I tend to wear my heart on my sleeve. It’s only one of the reasons why I could never be a contestant on Survivor.

When I pitched for my junior high and high school baseball teams, anyone could see how the outing was going simply from my body language. Veteran pitchers have mostly learned to control their emotions while on the mound. They refuse to let a bad call or a bad defensive play affect their mindset. Maybe, one of the days, I’ll grow into such a strong and mature way of thinking.

In every day, moment-to-moment life, I don’t think courage is as bold and brash and brazen as seen in Marvel movies and Finding Nemo.

Courage is honestly acknowledging your fears and doubts, breathing deep, and then taking your best swing. In the GRBL, I get three best swings before I have to sit down.

The first season I played in the GRBL, my why was to stretch my courage muscles.

I ended my first season with a severely strained calf. It took about six months for it to heal, though sometimes I still feel it twinge when I stretch it out.

In 2020, I tried out for the GRBL for a second time with two goals. First, to play a complete season and not get injured. Second, which best summarized my why, to be the best teammate possible.

I was drafted by the Ozark Mountain Ducks.* 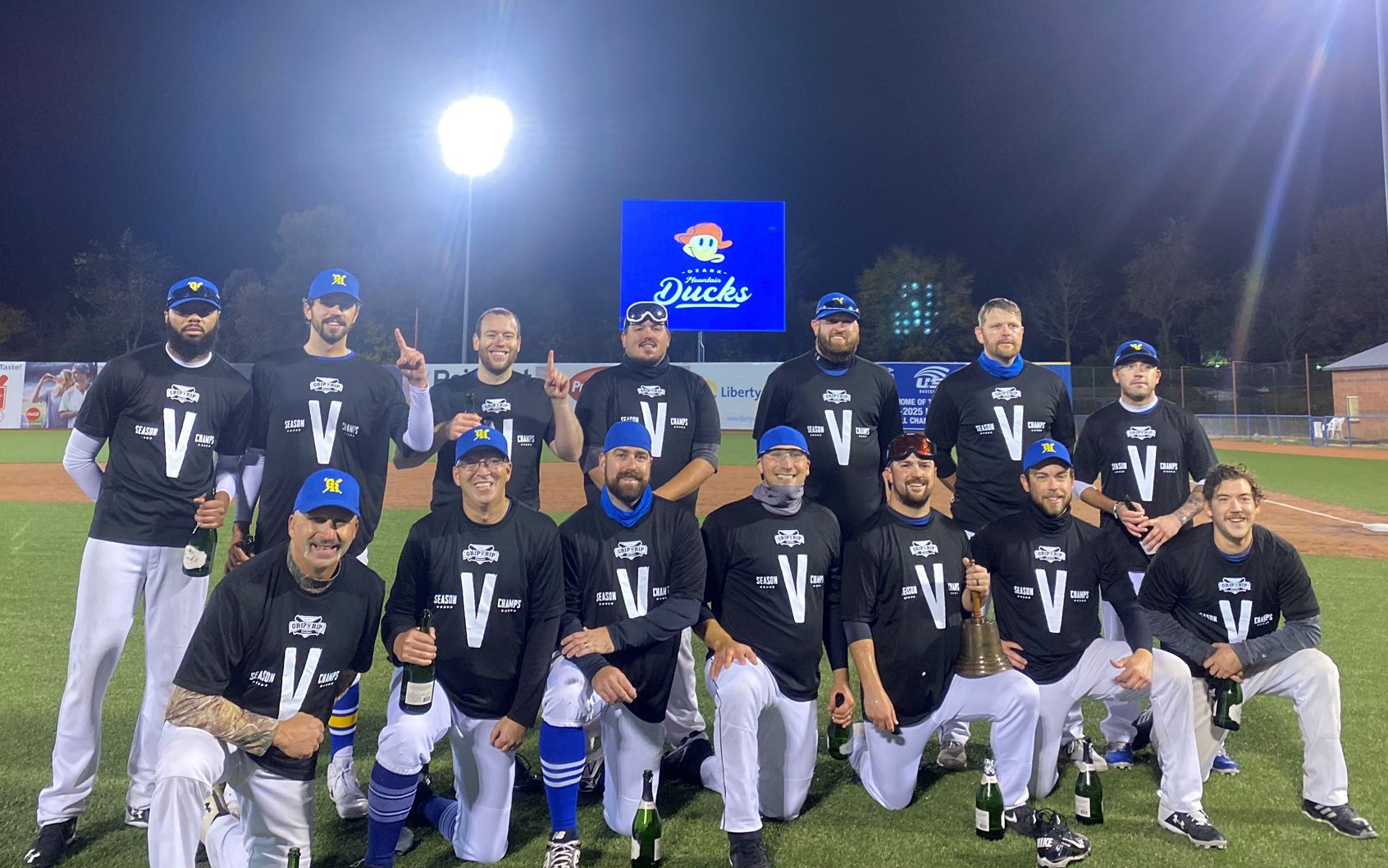 This team is my favorite team I’ve ever played on. Not because we won the last game of the season, though that is certainly a factor. Not because they sent me as a representative to the All-Star Game. (My on-field season statistics were, ahem, significantly less than eye-popping. I had only one hit and scored only one run. I caught two fly balls playing right field and once held Chris Leggett to a triple. I grounded into a double play and struck out on sliders away. My best personal day at the stadium came when I did a book signing of A Year of Playing Catch during a game.)

This team was my favorite because my teammates made playing baseball feel like it is supposed to feel. Like Saturday morning sandlot games. Like playing catch with your dad on the Field of Dreams. Like burnt ends and Dr Pepper. We played ball for one another, period.

I did play the entire season without getting injured. And I played alongside the best teammates.

Beginning in November of 2020 and throughout all of 2021, I worked out with my eyes set on trying out for a third season in the GRBL. I slowly pounded out miles on the treadmill and did weights and push-ups and pull-ups and squats. I hit hundreds and hundreds of balls off a tee trying to fix the flaws in my swing so I can hit sliders on the outside corner.** While I’m nowhere near in the best shape of my life — I’m never running a sub-six minute mile again — my body feels strong and up to the challenge of playing on the cook-your-toes turfed surface during the dog days of summer.

Tryout day came and I felt like I left my skills at the bottom of the Grand Canyon. (See above picture.) Outfielders were tasked with throwing three balls to third base from right field. One of the only skills I have not practiced this off-season is charging a grounder hit to the outfield, scooping it up, and making a strong throw. The field where the Friday morning crew practices eats up ground balls hit to the outfield. I am fairly certain my throws made it to third base without stopping.

I watched training partner and friend and 2020 Mountain Ducks postseason hero Mark Blehm take swings during batting practice. He launched balls into the outfield. The coaches didn’t even let him take all of his swings. The best thing that happened during my time taking batting practice is my bat didn’t break. At least my bat looks good. 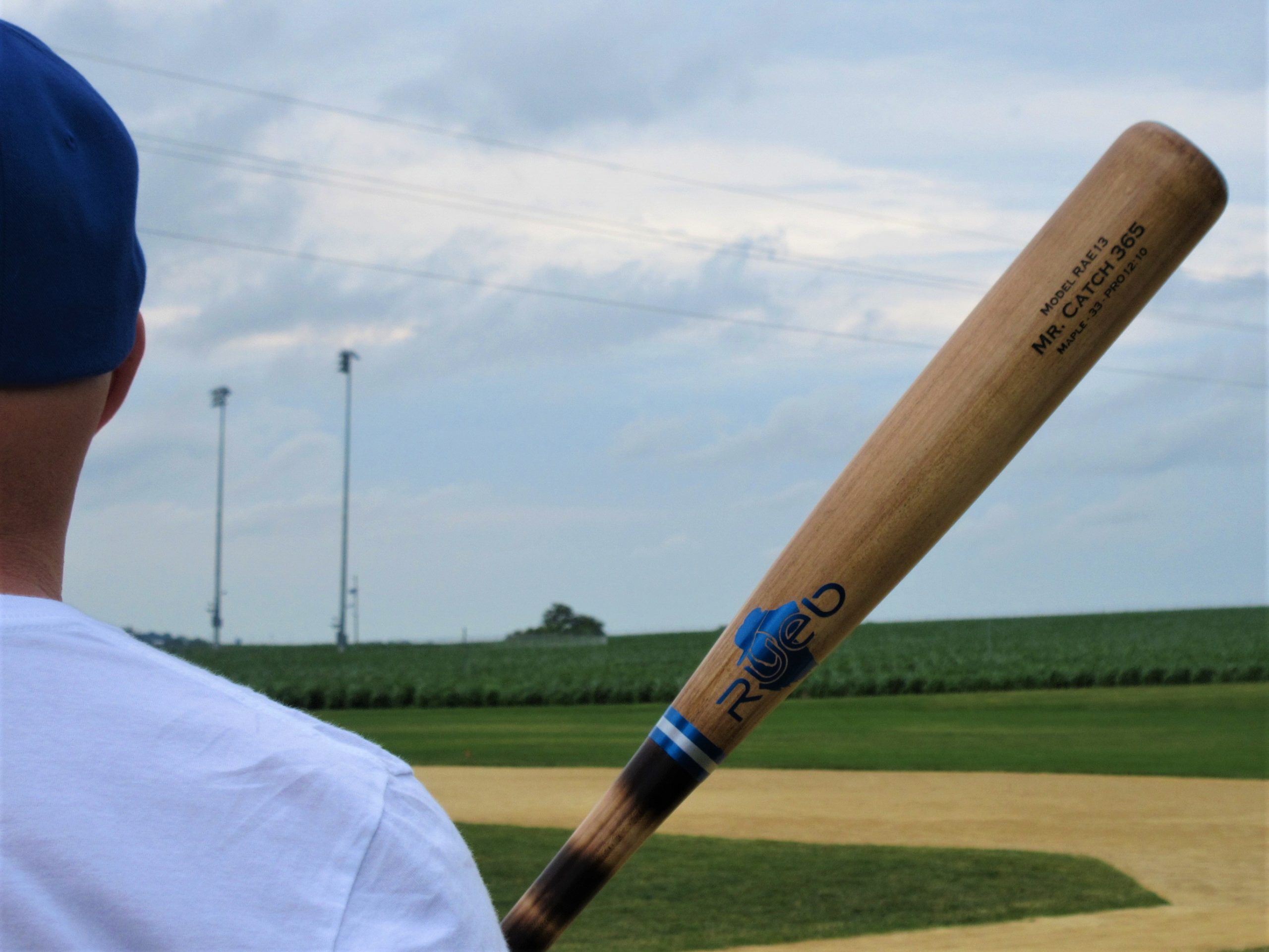 My personal best highlight from tryouts was the guy who greeted me, “You wrote that catch-playing book! I just ordered my copy. I’m going to have to ask you to sign it.”

I was again drafted by the reigning and defending champion Ozark Mountain Ducks. It is possible I was the last player picked in the draft. I am perfectly fine with that.

At the meet-your-teammates-sign-a-contract-get-paid-and-get-your-uniform-still-number-10 banquet, GRBL Director of Communications Rance Burger challenged us to get to know our teammates by asking their why. “Why are you playing in the GRBL?”

As soon as Rance said it, I started thinking. What’s my why this year?

I still dream of hitting a gap-shot double. Standing on second base with a mile-wide smile and trying to catch my breath, debating whether or not to ask for a pinch runner. I’d love to square one up while my daughters are in attendance, just to try and impress them a little bit. After watching several pitchers throw bullpen sessions during tryouts, however, I will be quite content if I can get a hit, period. I would really like to have a batting average. Besides, a double in and of itself is not a very good why. Some dreams will forever remain dreams.

A large part of my why is to spend time with friends new and old who love the game of baseball like I do.

One review of AYOPC reads something like this, “An old guy travels around and throws a baseball. I don’t get it. Who cares?” Those who play in the GRBL “get it.” They understand the passion involved and the powerful connections created through a simple game of catch. They understand how baseball brings people together. People who “get” baseball are some pretty brilliant and amazing people. I really enjoy being around baseball people.

Being my third season in the league, I have expanded my list to three goals. First, to again play a complete season and not get injured. Second, to be the best teammate possible. Third, to pass on my love of the game to the next generation.

My why, this year, I discovered while my wife and I were on the Catching Hope Tour during National Play Catch Week. My why is sharing hope and encouragement (a strengthening of the heart) through the game of baseball.

Not everyone can pitch like Skyler Henson or Clay Murphy or Cole Roark.

Not everyone can hit like Mark Blehm or Jacob Colter or Todd Tolbert.

But everyone, bald benchwarmers included, can pass along some encouragement.

Like when Miguel Cabrera gives a thumbs up to the pitcher who struck him out on the slider down and away. Or when David Ortiz tips his hat to the centerfielder who robs him of a home run.

During the catch-playing year, I learned that by age 14, more than 70% of ballplayers stop playing ball. I find that statistic heartbreaking. So, I want to encourage younger ballplayers to keep on playing.

The day after the 2021 GRBL championship game, I’ll give away a brand-new Wilson A2000 to a ballplayer between the ages of 12 and 16 who attends a regular season game of the GRBL. If you come to a Ducks game, you get two entries. Make a creative sign cheering on the bald benchwarmer, five entries.

How do you enter? Simply do the following three (or four) things.

The reigning and defending champions kick off the regular season on Friday, August 13th, just a couple of days before my 47th birthday.

Take heart and have courage, my friends.

Baseball in the Ozarks is back.

**Kansas City Royals phenomenal relief pitcher Dan Quisenberry once said, “I found a delivery in my flaw.” The same sentiment does not translate very well to hitting. Also, the thought of me hitting a slider on the outside corner — HAHAHAHAHAHAHAHA.