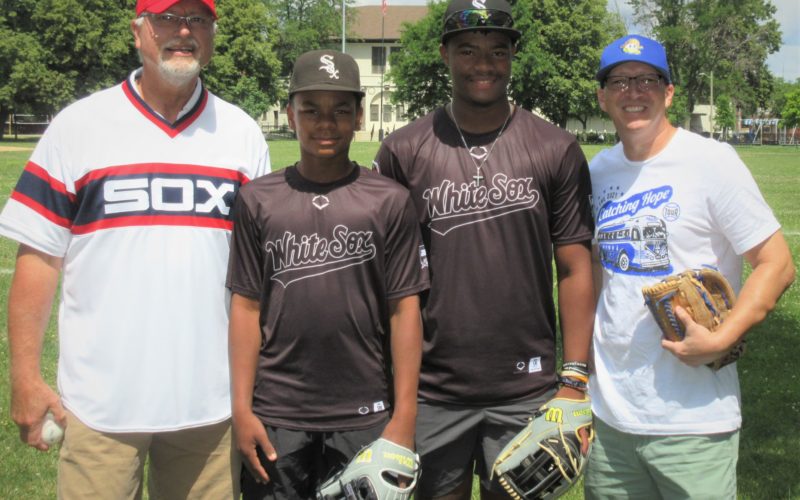 In a 1997 Toyota Camry that has a couple of dents, a car that was built in the year Jamie and I married, a car that still doesn’t have a name, Jamie and I drove more than 1,500 miles through the Midwest for the express purpose of playing catch and giving away gloves. For the duration of the trip, since he couldn’t be a participant, I used Dad’s 50-year-old Matty Alou model Wilson glove. I called the trip The Catching Hope Tour. It seems to me that hope has been in short supply in recent days.

“Gloves are a pretty extravagant gift,” one person commented.

I understood the sentiment; good gloves are not cheap. A new Wilson A2000 costs around $270. The custom-designed A2000 I’d like to purchase for myself runs closer to $400.** I’m fairly certain Jamie would rather I upgrade my flip phone to this millennium rather than upgrade my glove. When I try to persuade her, telling her I’ll have much more fun with the glove than the phone, she threatens to turn off Google Maps and have me navigate via an atlas. Ten points to Jamie.

In the moment the person commented on the extravagance of gloves, I didn’t know how to reply. I interpreted “extravagant” as “unnecessary,” and tried not to let that interpretation reflect on my face.

In Armour Square Park, the park adjacent to the ballpark where the Chicago White Sox play, Ron Kittle, slugger and 1983 AL Rookie of the Year, encouraged us to play catch with purpose and accuracy. “I’m throwing the ball as hard as I can and at your face. If you miss the ball, that’s on you.” For those dreaming baseball dreams, that is wonderful advice. Throw the ball hard, always. Throw the ball with intent, always. 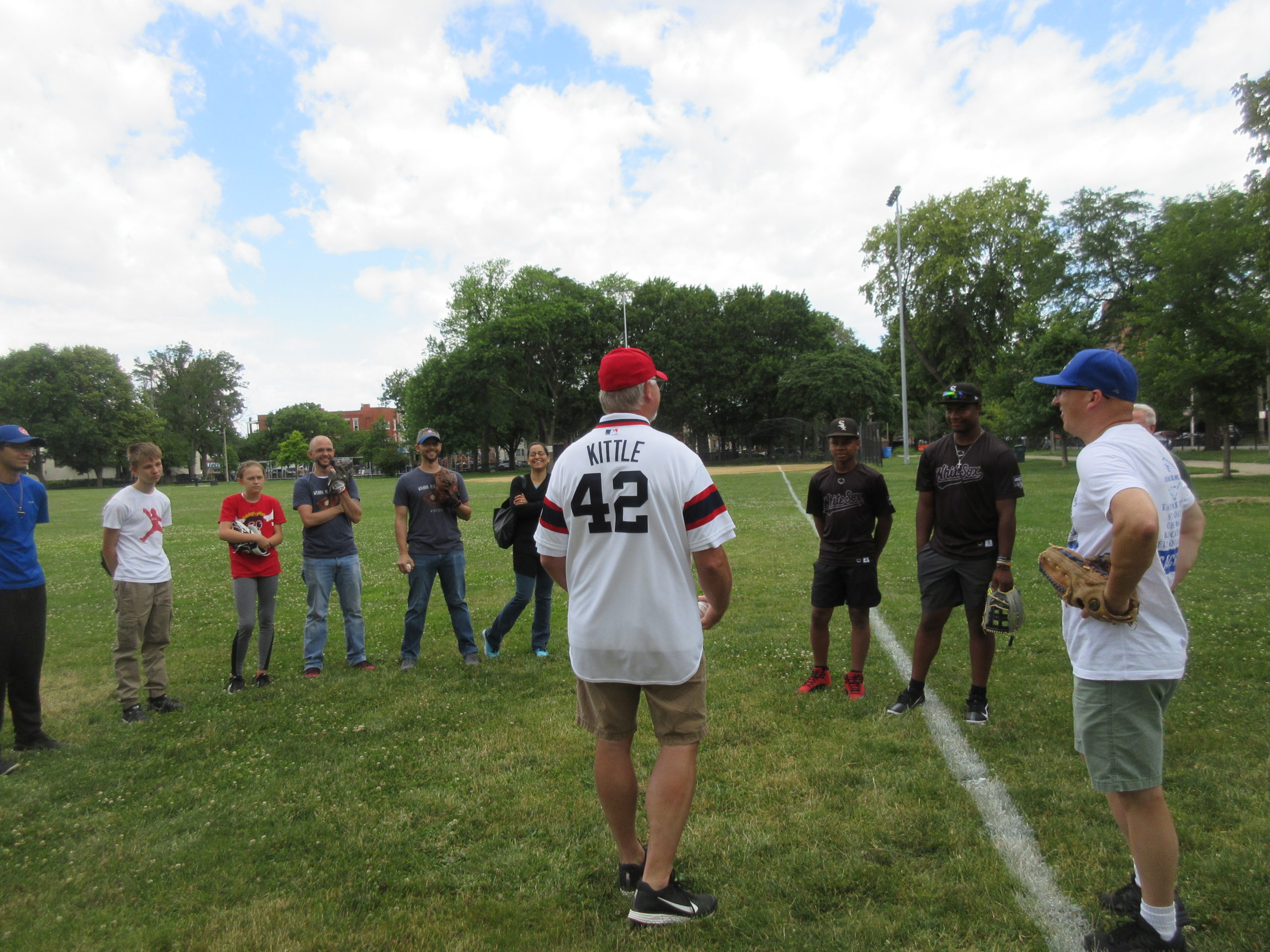 The very next day, at Beyer Stadium, former home of the Rockford Peaches, the L’il Peaches, as young as 6 years old, focused on the fun with friends aspect of playing catch.

I believe that playing catch (and other forms of play), much like praying, much like calling your mom, much like drinking a Dr Pepper, should be a highly encouraged way of life. No more than a couple of days — at most! — should pass between games.

The Catching Hope Tour started in Kansas City and was witnessed by Buck O’Neil, Jackie Robinson, Elston Howard, Ernie Banks, and Satchel Paige. The mural near the Negro Leagues Baseball Museum is my favorite mural in KC. On the miniature baseball field in front of that mural, I met William. His parents decided to keep the event a surprise and told him he had to meet a teacher for an interview. On a Sunday. In downtown Kansas City. I love parents with a sense of humor. William was all smiles when I told him my story and gave him his new glove. Playing catch with William and his dad was the perfect way to start the tour.

After William, I found Eric and Brett Potter at Kauffman Stadium. The father-son tandem has played catch at every MLB stadium. Their stories and experiences of throwing a ball from coast to coast would make a great ESPN 30 For 30 documentary. 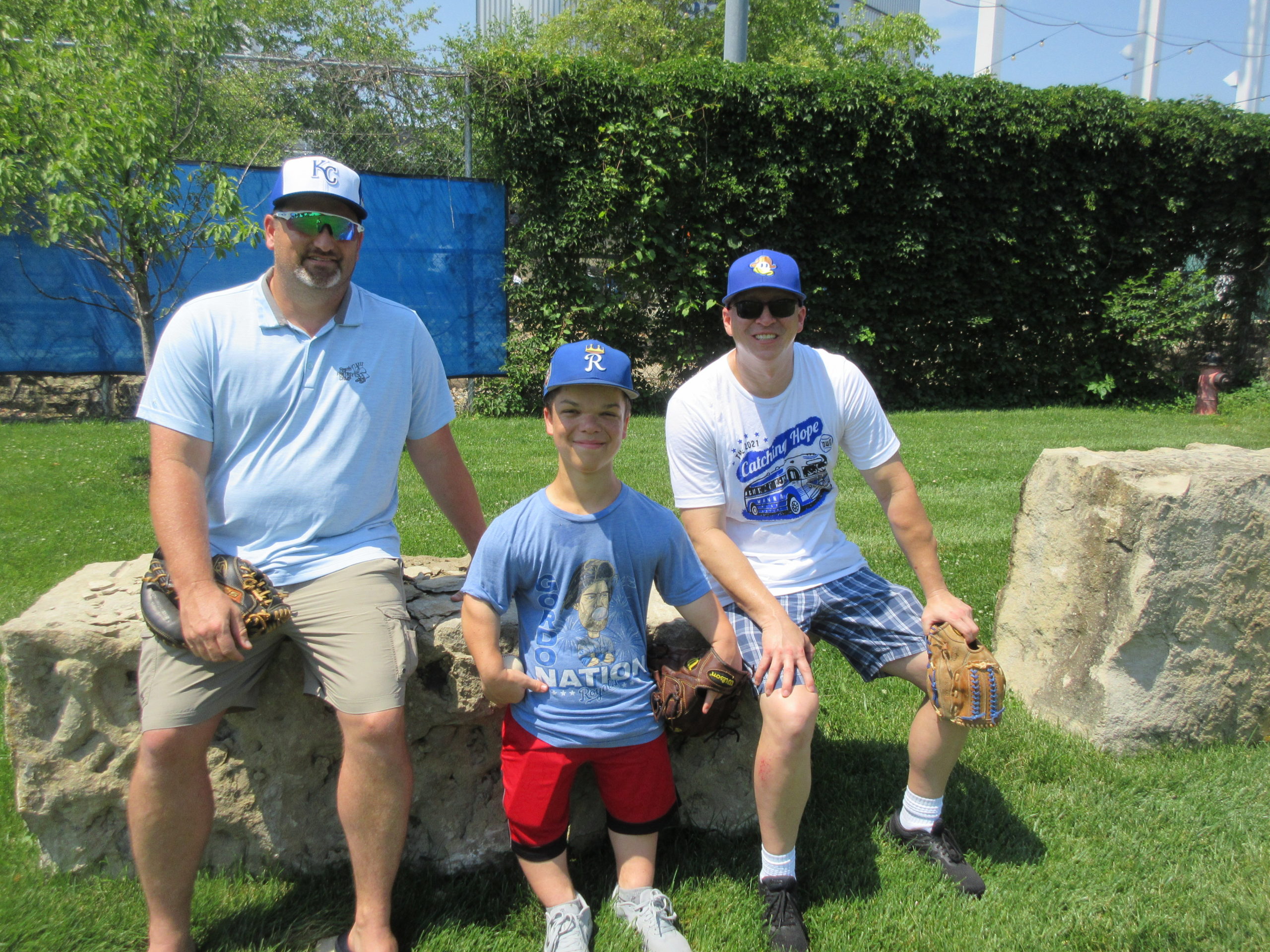 A glove is a gift that strengthens relationships.

In St. Louis, in the shadows of the Gateway Arch, I connected with Logan. Logan has a great laugh and an easy-going spirit. He put on the new glove and it looked just like a natural part of his body, like he had used it for the entirety of his life. Jacob, a teammate of mine on the Ozark Mountain Ducks, helped me find Logan. Logan plays for the same coach Jacob did years before. Without Jacob’s help, I never would have met Logan.

A glove is a gift that makes new friends.

Ricky is a sophomore ballplayer and part of the Chicago White Sox ACE program. He stands several inches taller than me. I would love the opportunity to play in the same outfield as Ricky. It was serendipity that connected us on his birthday. When I asked him, “What is your favorite catch-playing memory?” He replied, “Today.” Jamie and I were both shocked at his reply. 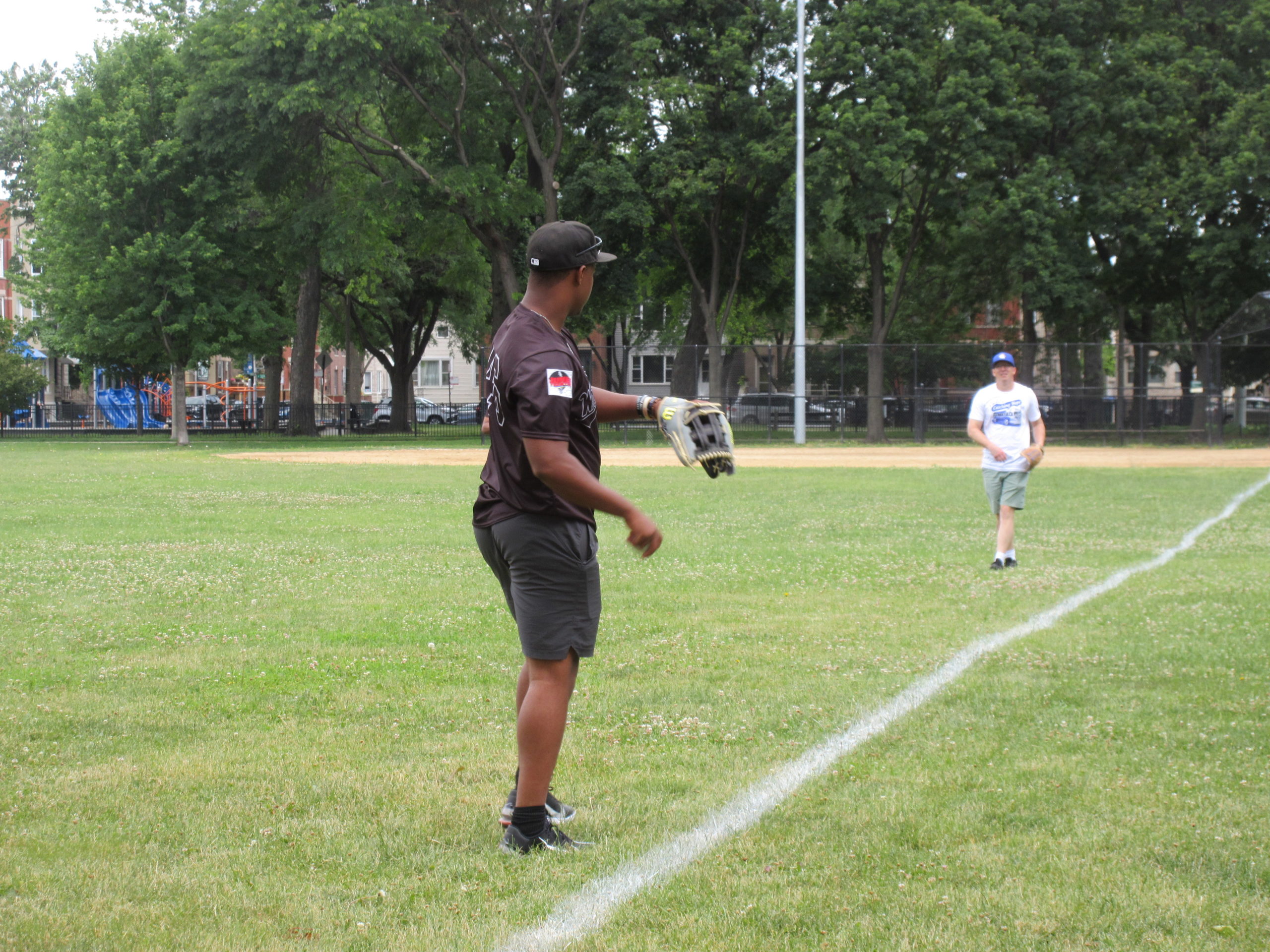 A glove is a gift that makes memories.

In Rockford, Illinois, standing on the infield of Beyer Stadium, I loved watching the L’il Peaches playing catch, running around, laughing and trying to stay warm as baseballs were launched into the air at all angles. Coach Bethany, whose training camp experience in preparation of coaching the L’il Peaches included daily ice baths and significant chiropractic adjustments, entertained me with stories of what she’s learning through the game. “The difference between coaching boys and girls is simple: girls listen.” 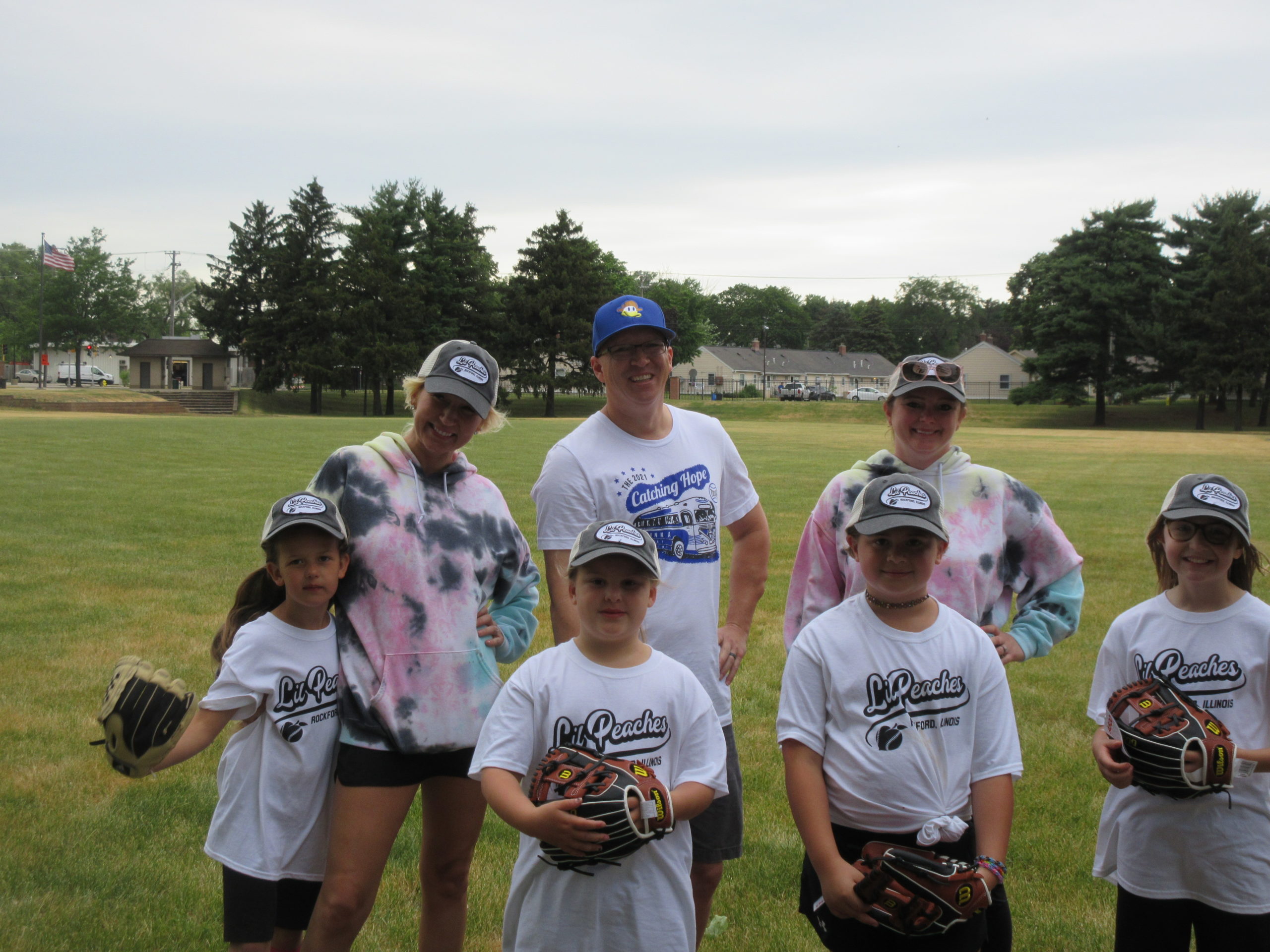 Also at Beyer Stadium, Shawn and I laughed at having the same George Brett model Wilson glove. Through his podcast, The Hall of Very Good, Shawn has limitless stories of the joy of being a fan of the game.

In a game that is dominated by numbers and statistics and salaries larger than any number I can imagine, it is easy to grow cynical and jaded. Playing catch strips away all the extras and brings things back to the most basic of building blocks.

A glove is a gift that inspires stories.

Like the stories of Tucker and Roman. They work at the Field of Dreams and have an abundance of stories of the on-going magic of the sacred cornstalk lined outfield. I think W.P. Kinsella would be honored by their attitudes and work. This field, inspired by a book, is now a place where people come from miles away to play catch.

Like Brayden. The 10-year-old from Colorado Rockies fan from Wyoming and his family. I spotted Brayden throwing batting practice to his dad. The pitches that weren’t hit into the outfield, the ones that were probably not strikes, I picked up and threw back to Brayden. And, surely, the same voice that inspired Kinsella to originally write the story inspired me to see if Brayden would be interested in a new glove.

The Trevor Story fan and I played catch in the outfield full of dreams. 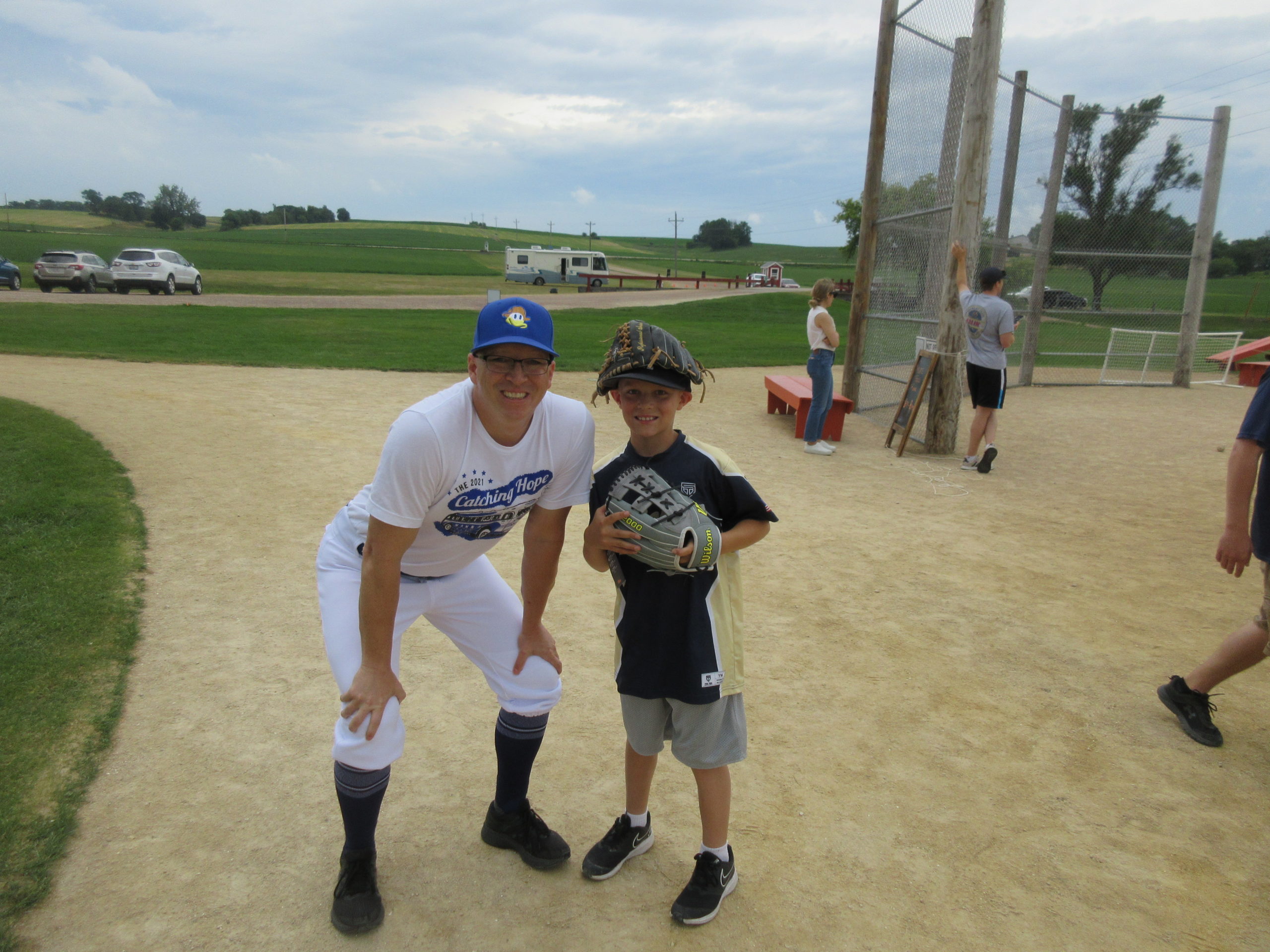 A glove is a gift that encourages big dreams.

Of course, there were difficulties and obstacles to overcome on the tour. Leaving Chicago, we were stuck in bumper-to-bumper traffic for an age and a half, which might have only been an hour, but it was long enough for me to finally grow my first beard. When we eventually reached our hotel, the reservation was for the wrong night. Trying to straighten out the confusion, our credit cards were declined. (My error. I had forgotten to alert the bank that we were traveling. Yet another lesson in humility.) A few phone calls later and everything resolved, and in a couple of weeks, I’ll laugh about it. But it was stressful at the time.

Rain was another obstacle. Almost every morning, Jamie and I prayed through the rain on the way to the next catch-playing venue. It wasn’t a bad way to start a day.

Leaving the Field of Dreams, hurriedly heading south to get to our hotel so I could join in an interview online, Siri took us on a “shortcut” over dirt roads filled with washboards and potholes. I was convinced the unnamed car was going to vibrate to pieces, leaving a trail of car parts in our wake. Later that night, midnight tornados rolled across the Midwest, giving me an adrenaline rush, keeping me awake during some of my favorite sleeping times.

But obstacles are simply opportunities in every good story lived.

Bigby, my godson, joined us at the Field of Dreams. The last time I saw Bigby, we played catch as part of the catch-playing year, as part of the first catch-playing tour through the Midwest. That was three years ago. The superhero survivor of three open-heart surgeries and two older brothers was full of observations about life, baseball, and Marvel movies. 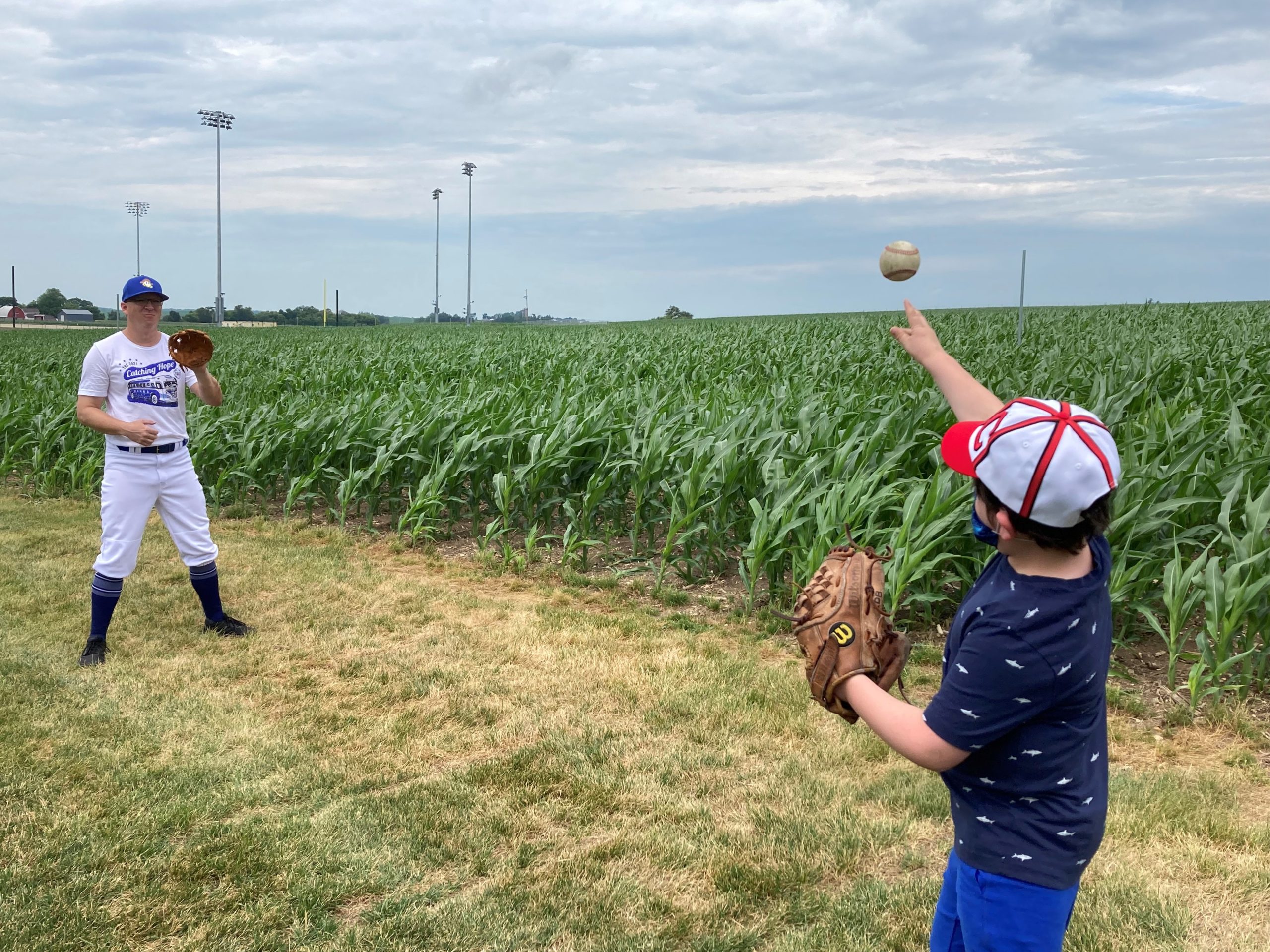 “We have a small yard and I don’t play catch a lot, but I think I would like to do it more,” Bigby said. “With practice, I can be better at playing catch.”

He missed the first few throws, but by the end of our time together, he was catching multiple throws in a row.

Jamie, my wife, was always behind the camera, taking pictures and videos so I could be in front of the camera, interacting with ballplayers and having fun. We were supposed to celebrate our 24th anniversary in January, taking a night away to go to a bed and breakfast, but had to cancel our plans when an ice storm of significant size rolled through the Ozark mountains. The first night of the tour, we stayed at a delightful and historic bed and breakfast in Fulton, Missouri, the Loganberry Inn. 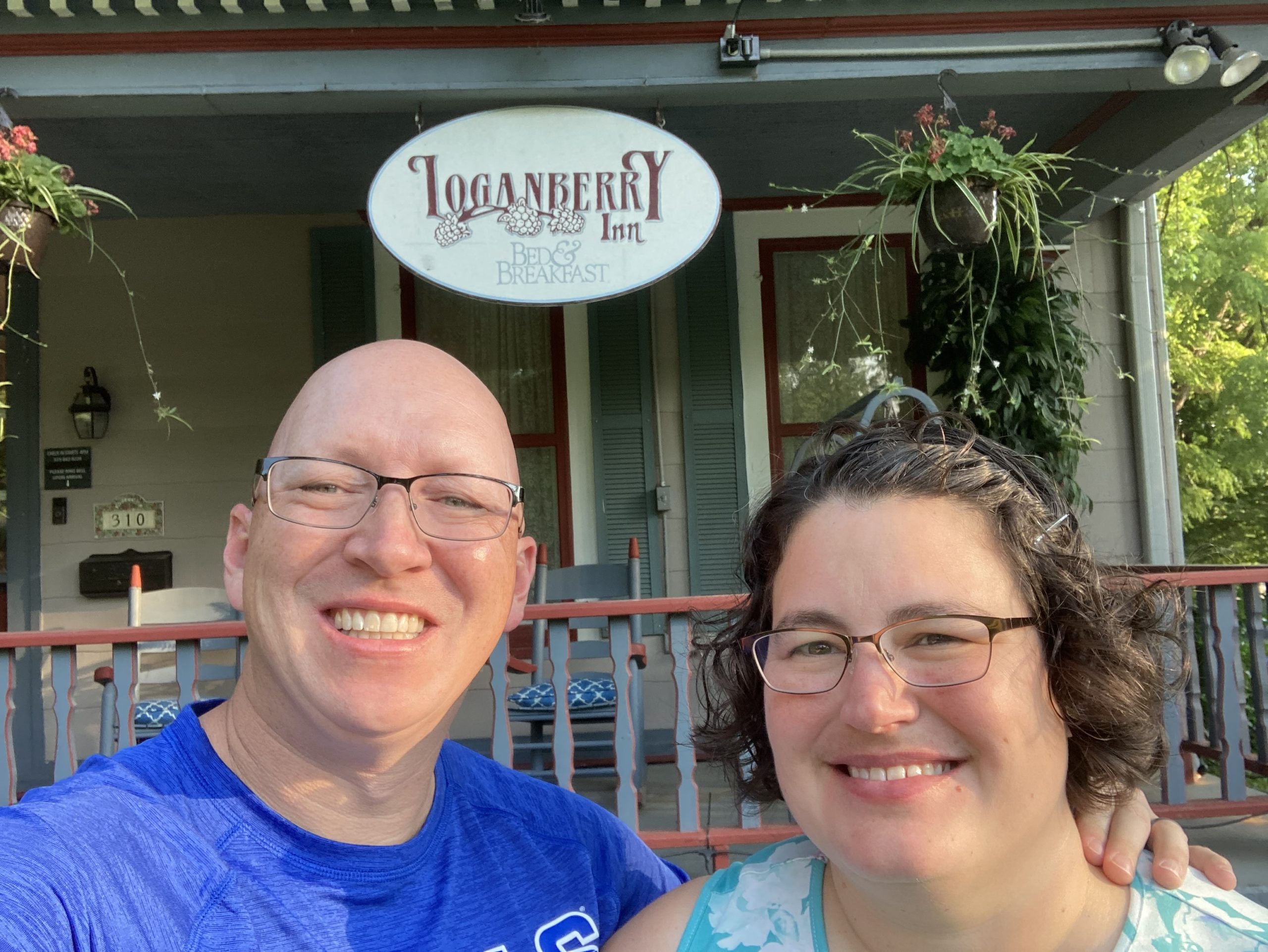 We finally got our game of catch in at Little Cubs Field, a stop that Shawn suggested between Rockford and Dyersville.

Some people may think it a stretch, but I think a glove can teach us to appreciate our catch partners, to be thankful for those who accompany us and help us to be our best.

Funny story. On that harried drive from Dyersville to Quincy, Jamie requested a stop.

“The next time you see a decent fire truck, please pull over,” she said.

I have no idea why she said fire truck.

She laughed. “I don’t know why I said that.”

So, somewhere in the middle of Iowa, but maybe it was Illinois, I pulled over.

And there was a “fire truck” at the gas station. A small one, part clown car, part go-kart, filling up on gas. 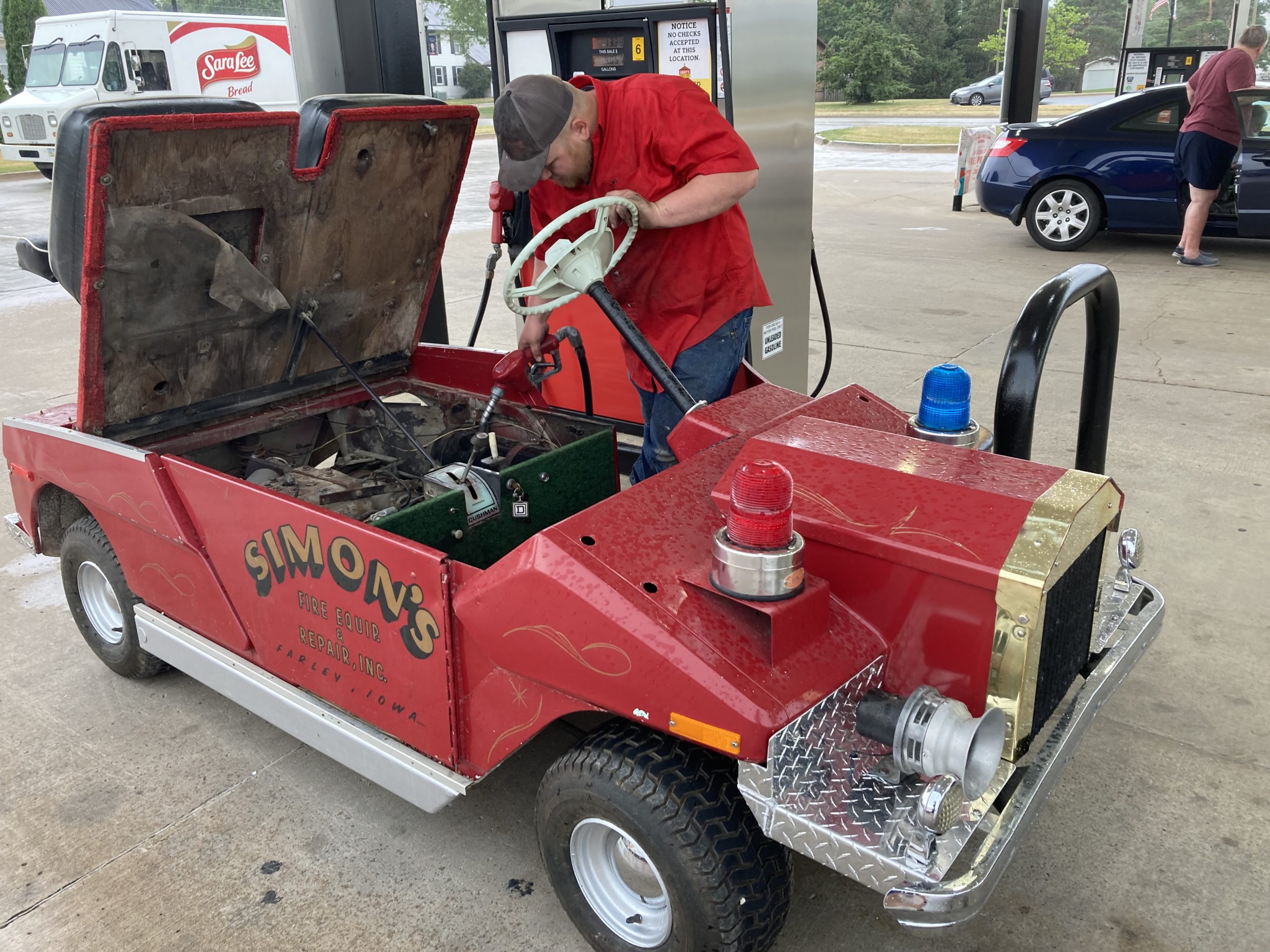 Lesson: Always listen to your wife. She says exactly what she means.

A trip like this doesn’t happen without help, like all the people connecting me to catch partners and those winning new gloves. Thank you coaches and new friends and old friends for all of your help.

Thank you to those who opened doors for Jamie and I to crash — Jake and Jen, Carl and Libby.

This trip wouldn’t have happened without Nate Rueckert and Baseball Seams Company. Nate knows the power of baseball to bring people together, to stitch together memories and relationships and heal past hurts. His brilliant art tells the redemptive tale of second chances and new life over and over again. Nate understood the heart and vision of this trip from the start. Thank you, thank you, thank you, Nate. Looking forward to going on a catch-playing, glove-donating trip with you.

I’m still trying to brainstorm what a glove-centric piece of art could look like. “Catching Hope” could be its title. Proceeds could help cover the costs of new gloves.

Thank you Rick and David at All-Pro Automotive, who got this car ready to survive storms and dirt roads and all the miles in between.

I believe gloves are gifts that strengthen relationships, make new friends and memories, inspires stories, shape imaginations and big dreams, teaches tenacity and an appreciation of other people.

The original Dr. Archibald “Moonlight” Graham chased baseball dreams and had considerable talent for the game. But, he found his calling in using his gift, making an invaluable contribution to the Chisholm community as a doctor.

**There are actually 2 Wilson A2000 models I’d like to custom design.

◀The Short Version
My Why▶