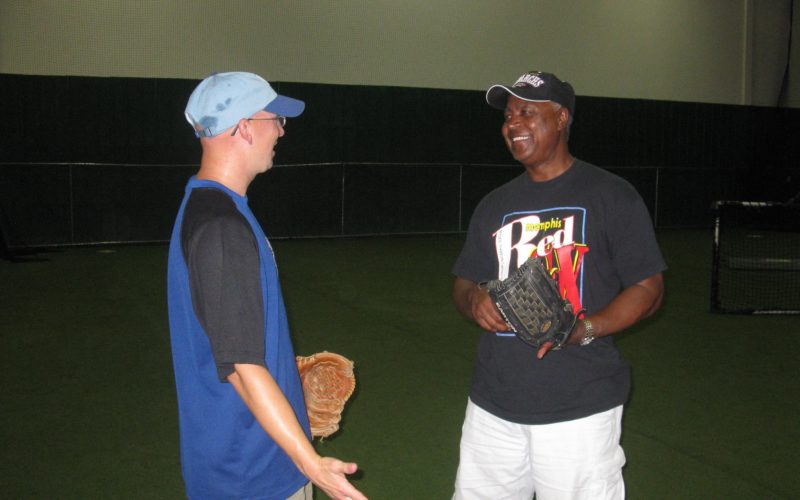 The Royals retired his number 20, proudly displaying it at The K alongside numbers 5, 10, and 42. He also has a statue in the centerfield pavilion.

“How many people ask you to play catch?” I asked.

“No one. You’re the first,” he replied. “People want pictures and autographs, but no one wants to play catch.”

I embarrassed myself in that game of catch with the five-time All-Star and World Series champion. My throws were horrible. We were, maybe, fifty feet apart and I threw wide and over his head and it was quickly apparent that, whatever skills I had that landed me warming the bench for Kickapoo High School, had long disappeared.

Even so, I played catch with Frank White.

The only reason I was able to play catch with Frank White was because I said something to a friend. She happened to have a connection with his family and, a week later, what had been a dream for years became a reality. Sometimes, having the courage to declare your dreams is all it takes to turn what was once a wish into a whimsical and unforgettable experience.

Playing catch opens the door to relationship, to friendship, to learning about one another and from one another, to sharing life.

I wrote those words in an article published in Immerse Journal in July of 2011. It was a simple story about meeting and playing catch with Frank White. And it was the first story I was ever paid to write. In July 2011, I could never have imagined I’d still be writing stories about playing catch almost a decade later.

I have big dreams for A Year of Playing Catch.

I dream that it inspires moms and sons and dads and daughters to step into the backyard for a game of catch after dinner. Family reunions from coast to coast could have games of catch as a planned activity, where generations “learn about one another and from one another.” PE classes might incorporate playing catch into their curriculum at all levels.

I dream that friends will meet for catch and conversation, connecting in ways simply not possible through social media and texts. Co-workers on lunch breaks and church staff meetings could all incorporate catch into their routines, because playing together is crucial for our humanity.

I dream of others who will take up the Catch 365 challenge and live their own adventures. I only hope to be able to participate so I can cheer them on. Maybe I’ll come up with a prize for those who successfully complete it.

I dream that the book will open doors for me as an ambassador of baseball, getting gloves in the hands of kids of all ages, encouraging them to step outside, soak up some vitamin D, and play.

Maybe I could even write a companion curriculum so Play Catch Clubs can open at Boys & Girls Clubs all across the US? Playing catch is definitely a wonderful form of social distancing.

I also have selfish dreams for A Year of Playing Catch.

I dream of it landing on a best-seller list, specifically one in the home of the Yankees and Mets.

I dream of it opening doors to sign a one-day contract with the Royals.

“Why in the world would the Royals sign a 46-year old to a one-day contract?” you might ask.

Someone needs to warm-up the left fielder in between innings. I’ve got an arm and a glove and my throws are a lot better now than when I played catch with Frank White.

I dream of Sean Astin reading it and declaring me an honorary Goonie.

Robert Benson’s first book is titled Between the Dreaming and the Coming True: The Road Home to God. In it, he wrote,

‘There is a Dream dreaming us,’ said an African Bushman to Laurens Van der Post.

One assumes that the Dreamer is the same one who looked at the darkness and said, ‘Let there be light.’ The same Dreamer delighted enough in that one act to choose to let there be light every twenty-four hours ever since, as though he cannot get enough of it himself. Can it be that the One who imagined the sun rising over the dark edges of the world each day imagined me in the Dreamer’s own image in my own place?

In the pages of this amazing book, Benson describes this journey of becoming the me God dreamed into being on the journey home.

My dreams, selfish or not, are no surprise to the One still dreaming the morning light. My dreams, realized or not, are just introductory chapters in God’s Great Story, an adventure like none other.

A Year of Playing Catch publishes in 20 days.