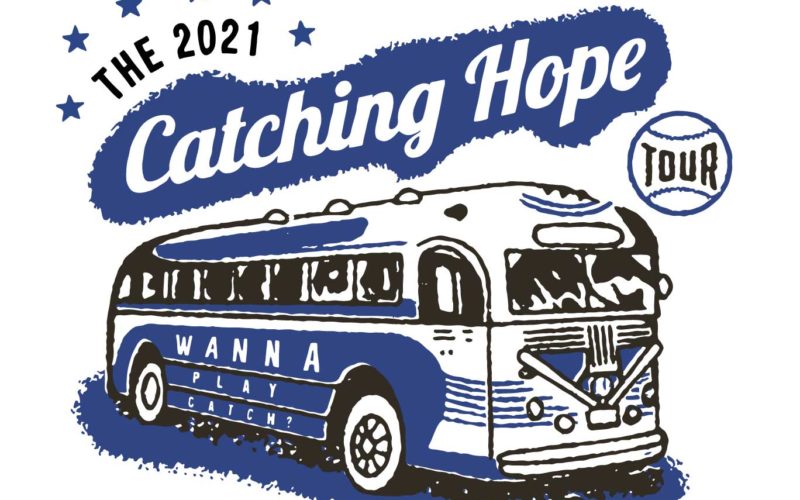 From Kansas City to the catch-playing cathedral, the Field of Dreams, with stops in St. Louis, Chicago, and Rockford.

To encourage people of all ages to play catch.

Humans are the only species on the entire planet whose physiology suggests that we are created to play for the entirety of our lives. Yet, we live in a world that is play-deprived. As one 2019 study summarized, “More than 75% of children under 12 are not getting enough free, active, playtime.” The older we get, the less we tend to play.

According to Dr. Stuart Brown of The National Institute for Play, “A life or a culture deficient in play exists as a heightened major public health risk factor. The prevalence of stress-related diseases, interpersonal violence, addictions, and other health and well-being problems can be linked, like a deficiency disease, to the prolonged deprivation of play.”

Play is imperative to living a good story.

Over the course of the catch-playing year, I connected with more than 500 different catch partners, more than 500 different people I now call friends. Simply from throwing a baseball. Friends who live in other states and love baseball teams other than the Royals and are living their own good stories. Friends I now keep in touch with through texting and email and all the ways friends keep in touch.

New friends are one of God’s greatest gifts.

When I first started throwing a baseball with my daughters on that frozen New Year’s Day of 2018, I had no idea how much the catch-playing year would teach me about hope.

I wrote this in A Year of Playing Catch:

Play is an audacious act of hope. In a world that is driven by the bottom line and uber-efficiency, play loudly challenges everyone not to take themselves so seriously. Play breathes into our broken world and extends an invitation to join the present beauty.

Play creates margin in the midst of the mundane, offering fresh perspectives and insight in exchange for an investment of time. Like art, like music, like love, play is a beautiful and exhausting act of hope. May we have the courage to live our lives as play-filled masterpieces.

Hope comes as a gift and enables us to fully experience the wonder of each day.

I’ll accomplish these goals not just by playing catch with new friends, but also by giving away gloves.

I know how it feels to receive a new glove as a gift. When the laces on my George Brett glove broke, Wilson sent me a brand-new glove, straight from Spring Training, just in time for Opening Day 2018. When I gave that glove to Isaiah at the end of the year, there was so, so much joy in Springfield-Mudville.

A few weeks ago, I was able to surprise another young ballplayer with a new glove. I played catch with Braydon for about 20 minutes as he started breaking it in. Mark, my baseball training partner and the postseason hero of the 2020 Ozark Mountain Ducks, texted me later that evening, “He’s been working on that glove and playing catch for almost four hours now.”

I believe in the power of a glove. Gloves carry memories and create community. Gloves encourage physical play and big dreams.

Gloves, however, are expensive. Like any story worth living, I need help. I needed help from 500 new friends to be able to play catch for an entire year. I need help to give away gloves.

Thanks to the aforementioned friend Mark, custom t-shirts are being printed and sold. (This is the link to purchase a t-shirt.) Proceeds from the t-shirts will be used to purchase new gloves. On the front of the shirts, the logo based on a barnstorming bus of the Negro Leagues teams. On the back, the generous sponsor, Baseball Seams Co., and the destination cities.

Now, for a word about our sponsor.

Baseball Seams Co. creates phenomenal art from used baseballs, giving baseballs that are torn or waterlogged or out-of-round another chance to bring joy into someone’s life. Art is a powerful form of play, helping us to see from new perspectives, better appreciating this world we live in and the people who make life meaningful. Just like giving someone a new glove, Nathan’s creations tell stories of memories on and off the field, community, and hope. From cufflinks to original pieces, the art of Baseball Seams Co. welcomes beauty and celebrates all the best parts of the great game of baseball.

Between now and Father’s Day, there’s still a lot of work to do to make The Catching Hope Tour the best it can be. But the work will make the play all the much more meaningful.

Besides, we all could use a story of hope this summer.

If you have interest in connecting for catch on the tour, donating towards gloves, or know of someone in need of a new glove, I can be reached at: hello@ethanbryan.com.

◀The Power of Glove
A Play-Created Masterpiece▶