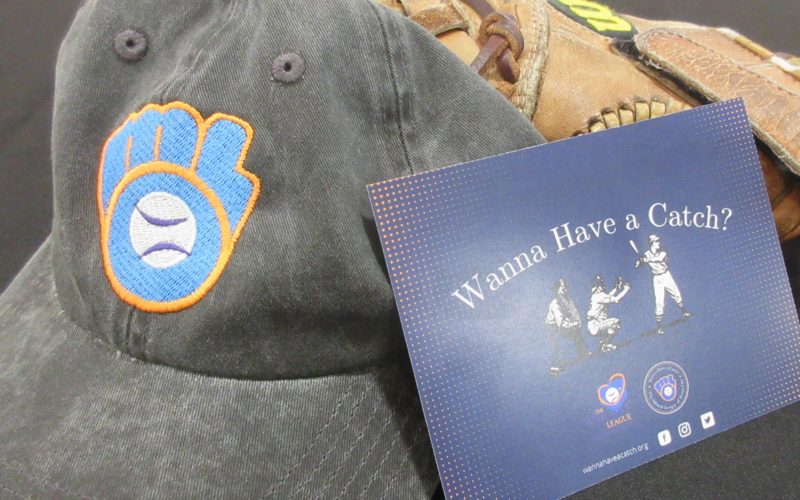 I first read “A Year of Playing Catch” back in February and it so inspired me.

We have a few areas of common ground — playing catch with our fathers, a love of baseball, employment in a church setting, involvement with The Miracle League, and a relationship with Nathan and Baseball Seams Co.

I turn 60 on January 18, 2022, and plan to play catch for 365 days and raise $100,000 for The Miracle League of Sioux City. I would love to catch up with you sometime before that to learn more about your experience but also to make sure you are OK with me pursuing this goal and making sure that if so, I honor you and what you have done.

On a single-digit day in late January, I drove more than 450 miles north, toward the wind and snow and below-zero wind chills, so I could meet Kevin for a game of catch and attend the kick-off event for Wanna Have a Catch.

I know how it feels to play catch on below-zero wind chill days. At the very beginning of my Catch 365 journey, Josh and I played catch in front of the Missouri Sports Hall of Fame in a wind chill of -16. Layers upon layers were a necessity. It was basically a Zits comic brought to life.

What I didn’t know then, what I do know now, is how important a simple game of catch is to being human.

We live in a play-deprived culture.

According to Stuart Brown of The National Institute for Play, “A life or a culture deficient in play exists as a heightened major public health risk factor. The prevalence of stress-related diseases, interpersonal violence, addictions, and other health and well-being problems can be linked, like a deficiency disease, to the prolonged deprivation of play.”

We also live in a culture where loneliness is on the rise, a fact that has been exacerbated in recent years by the pandemic. Nearly half of Americans reported sometimes or always feeling alone.

Playing catch reduces stress-related hormones and releases endorphins to make us feel better about ourselves and the world in which we live, giving us optimism and hope.

Science journalist Lydia Denworth wrote, “Play is a profound biological process. It shapes the brain and makes (us) smarter and more adaptable. It fosters empathy and makes possible complex social groups. For us, play lies at the core of creativity and creation. Play is vital.” In short, playing catch brings people together.

For those more advanced in years, playing catch can help improve and maintain balance, and is a good daily activity for people struggling with Alzheimer’s and dementia, helping them to maintain connections with others through physical play.

And playing catch is fantastic across generations. When children play with older adults, they experience an increase in self-worth, receive much needed one-on-one attention, and have their worldviews challenged and horizons expanded.

Older adults who play with children report having better physical health and lower occurrences of depression.

I have experienced the incredible power of playing catch, how it brings people together to make new friends, how it sparks joy and hope and wonder.

So, I borrowed Mom’s car and listened to a Dan Brown audiobook and drove north in January for a game of catch.

My project was inspired by my daughters, who encouraged me to try it over dinner on New Year’s night. Three good words to describe my catch-playing year are: grassroots, quixotic, and whimsical. Most often, it was just me and one other person throwing a ball, sharing stories, and laughing.

Thanks to a team of passionate and gifted friends and generous sponsors, Kevin has taken playing catch to a completely different level. Three words to describe Kevin’s catch-playing vision are: transformational, synergetic, and global.

Kevin kicked off his year on his 60th birthday, playing catch with his dad.

Five days later, we met at The Arena Sports Academy in Sioux City, who volunteered the space to host two different kickoff events. Beginning at 2 and lasting for two hours, Miracle League athletes came to play catch, wiffle ball, basketball, cornhole, putt-putt, and a host of other games. Over the course of two hours, Kevin played catch with dozens of people. 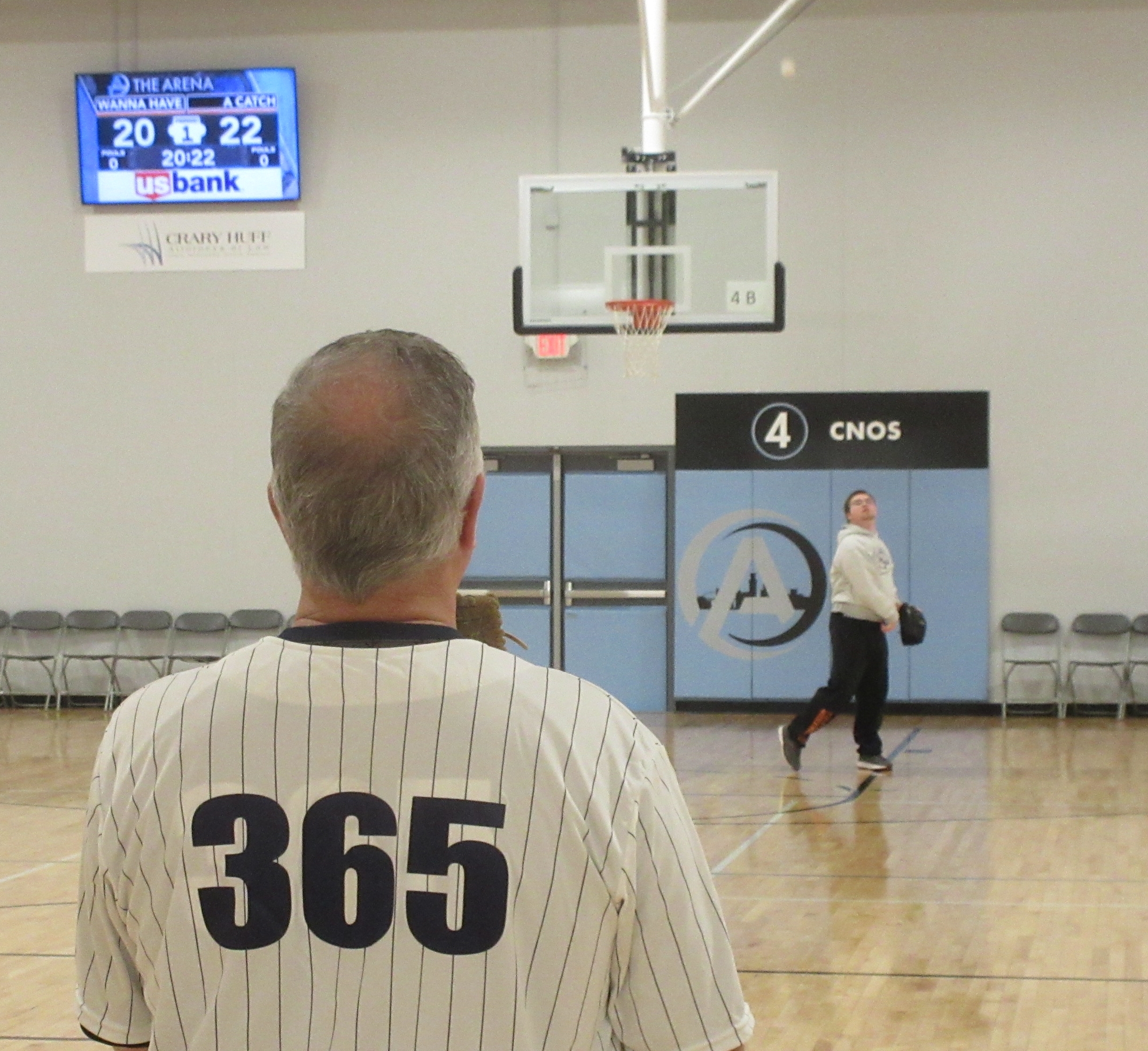 I thought having 500-plus different catch partners in one year was rather impressive.

By the time Kevin’s year is over, he’ll have played catch with thousands of people. (Good luck writing the appendix in that book!)

The second event was an adults-only party with a silent auction. The auction table included artwork from Baseball Seams Co., Chick-fil-A for a year, and a pair of autographed baseballs from Don Larsen and Yogi Berra. I perused the tables several times, but bidding quickly exceeded my budget.

At the evening event, I met Dustin, the inventor of the Switch Hitter. Dustin’s son, Kayden, is a huge baseball fan. (I saw several pictures of Kayden wearing Royals’ gear, so I know his heart’s in the right place.) Because of Kayden’s physical limitations, it is not possible for him to swing a baseball bat without assistance. Using a switch that Kayden pushes with his head and powered by a DeWalt battery, Dustin created an incredible device so Kayden can swing his bat by himself.

I’ve been using the same flip phone for the past three or four years, but that doesn’t mean I don’t appreciate the value of a smart phone. Dustin showed me several videos of Kayden hitting balls during Miracle League games. I wanted to stand up and cheer every single time Kayden made contact.

During the evening event, Kevin played catch with another dozen or so people, including me. 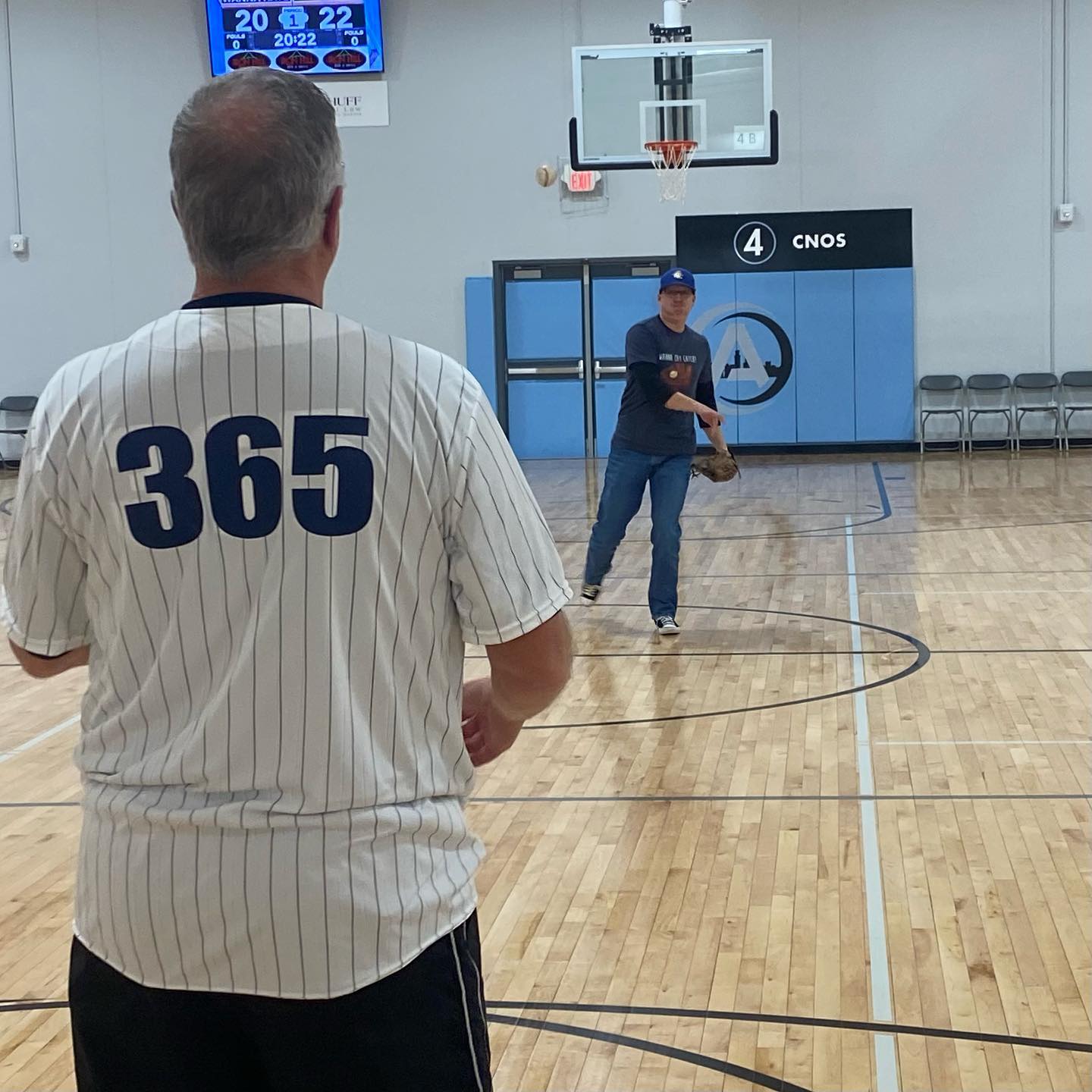 Kevin’s goal for his catch-playing year is to raise $100,000 for the Miracle League of Sioux City, so children like Kayden can experience the wonder and power of playing ball.

Kevin is now headed to Tanzania for a few days, where he’ll play catch with more miracle kids and make more new friends and live an epic chapter in this Catch 365 story.

After witnessing the kickoff event and hearing his stories, I think Kevin set his goal too low. 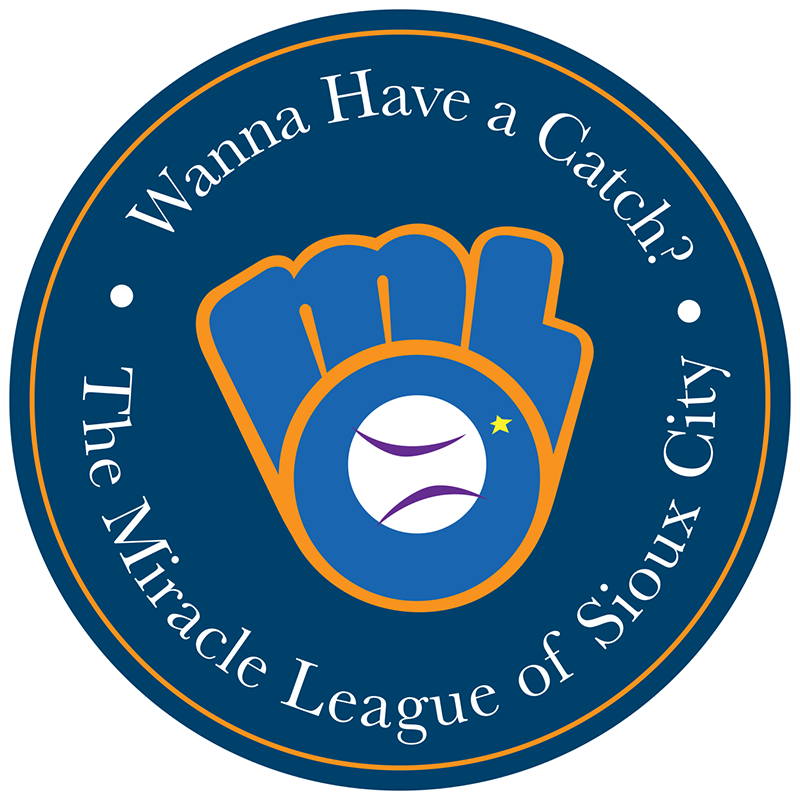