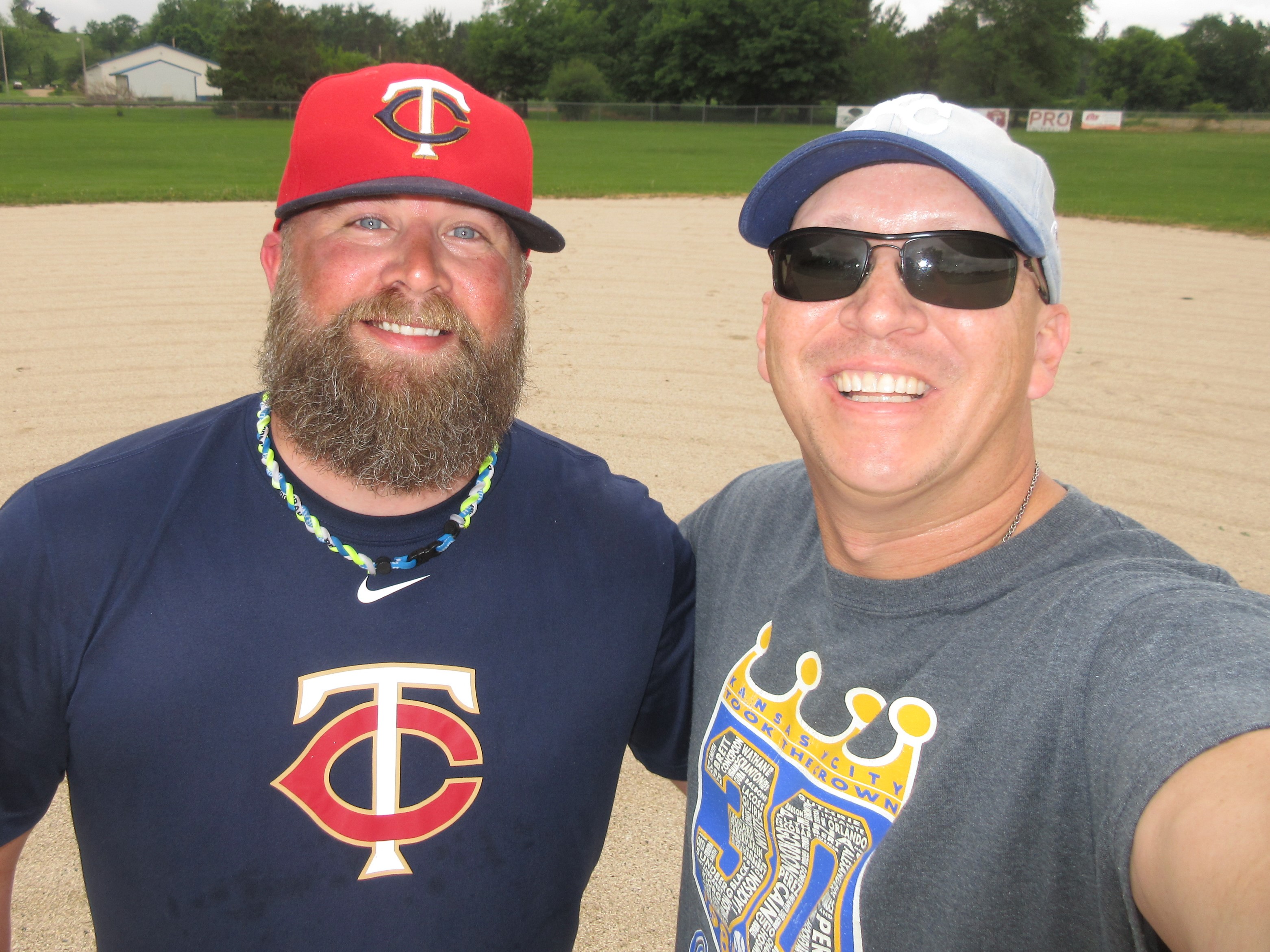 Population 180 and one ball field, thanks to Ryan.

Ryan grew up a Twins fan.

I know the name Kyle Gibson for two reasons. He is the Minnesota America at the Seams story and he was the starting pitcher against the Royals last night. The Royals never seem to do well against Gibson.

True to form, Gibson left the game with a 1 – 0 lead after seven innings. After tying the game in the 8th on a walk, the Royals won in the bottom of the 14th inning on an Alcides Escobar walk-off home run. I fell asleep sometime in the 10th inning.

Even so, Ryan greeted me decked out in all things Twins.

“Just because you had a bad day yesterday doesn’t mean you’re not going to have a good day today.”

Ryan knows all about bad days. In the end of January 2013, he was diagnosed with testicular cancer.

“After a shower one day, I noticed a lump that was painful. My wife told me to get it looked at, but I decided to wait. Not too long after that, I was in excruciating pain no matter what I did — sit, stand, whatever. My boss drove me to the ER and I had surgery the next day. The following Monday I had routine scans. I even went to the Mayo Clinic to make sure it was isolated and explore next options. Visiting the cancer unit at the Mayo Clinic…” Ryan took a deep breath, “being at the Mayo Clinic puts things in perspective. Makes you feel very fortunate. They caught the cancer early, so I didn’t have to do any radiation or chemotherapy. I still have regular CT scans and blood work and chest x-rays.”

Ryan has been cancer-free for five years now.

A couple months after being diagnosed, his family moved to Wallingford, Iowa into a house that used to be the school house back in the 1940s. Behind the former school house was large field of either beans or field corn.

“Beans in even years.”

And next to the field, only 88 steps from his back door to the first base dugout, was an overgrown baseball field

“I’ve heard stories about when this field was at its best — lights and a press box and all.”

November 2013 was an election year in Wallingford and Ryan decided to run for city council. He won. The next month, very early on Christmas morning, his second daughter was born.

“It was pretty emotional considering how the year started.”

Ryan learned that the citizens of Wallingford wanted to turn the old baseball field into a dog park. Out of a sheer love for the game, he took it upon himself to get the field into shape so it could remain a ball field. They turned the tennis courts into a dog park instead.

He started dragging the weeds using an old chain link fence. He got rid of the pea gravel infield and brought in three loads of proper infield material. This year, he even procured sponsors who get a banner in centerfield and help cover some of the costs of field maintenance.

“I’d love to get a proper drag, some rakes and brooms, just normal maintenance equipment.”

In July, Ryan’s field will host a woman’s softball tournament and a slow pitch league on Sundays. Area baseball teams have already used the field for practices.

We played catch on his infield and I made a few bad throws working the kinks out of my back and shoulders. Ryan’s helping coach a little league team for the first time and sympathized with my soreness. Kaylea and Sophie grabbed gloves and spread out along the third base line. Jamie unpacked a picnic lunch for us, complete with Dr Peppers courtesy of Nathan.

Once we had warmed up with thirty or forty throws, I moved to right field and the left-handed hitting Ryan hit me fly balls to chase down. The recent rains made the grass a little longer than the grass at Werner Park, but the hops were true and the overcast sky was perfect for tracking line drives and high pop-ups.

“My dream is for people to come here and have fun.”

I was in heaven in Iowa.

If the Twins ever need a super-fan — check out the tattoo on his calf! — to throw out a first pitch, a super-fan who is using baseball to bring joy to his community and raise awareness for testicular cancer, I can think of no better candidate than Ryan.

**Pictures to be posted tonight.