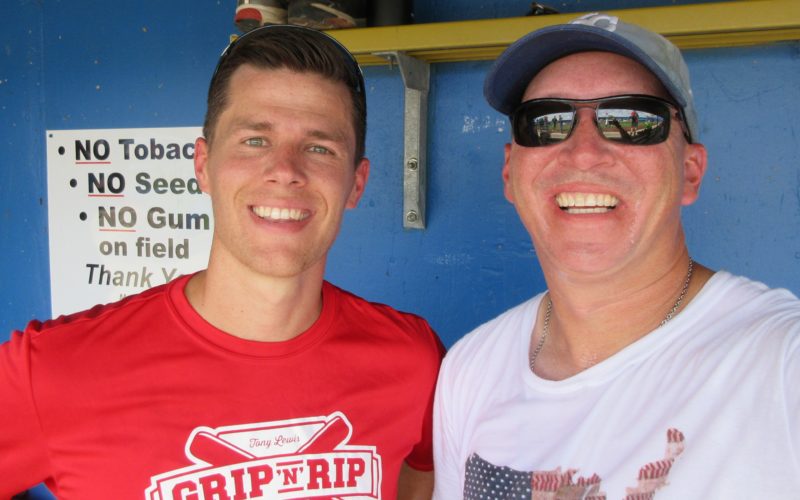 “You’ve got this,” Kaylea texted.

Wearing my two-sizes-too-small practice pants for the first time in years, I felt almost like a ballplayer. I was equal parts excited and nervous, mostly because I had no idea what to expect. I was getting ready to head in to U. S. Ballpark for the open workout of the Grip ‘N’ Rip Baseball League. Tryouts are next Sunday, but I’ll be out of town.

Tony started the wood bat league a couple of years ago and I’ve followed the first two seasons online, cheering for all the teams — The Finley River Rascals, The Bald Knobbers, Table Rock Lake Monsters, The Cashews, The 66ers, and The Queen City Slickers. For this third season, Rance (Day #32) will be calling play by play for all the games online.

I entered the stadium just as everyone finished playing catch. Epic timing. Fifty to sixty guys showed up for the open day on the flaming hot turf. As waves of heat surrounded my feet, I was reminded of the story of Frank White soaking his feet in buckets of ice water in between innings when Royals Stadium used to be an all-turf field. While sitting in the dugout trying to figure out where to go, I spotted Coach Lael (Day #137) and approached him as Coach Nasby gave instructions for those preparing for the tryout.

I volunteered to catch in for Coach Lael as he hit grounders to third and short in between hitters taking batting practice. He just returned from a cruise which sounded incredibly refreshing as my feet felt like they were on fire. After one rotation catching in, I was replaced by another helper and sent to the outfield to shag fly balls. Through two rotations, everyone was a pull hitter except for the lefties who took the ball to the opposite field. When the next rotation started, I yelled out to Justin.

Dustin (Day #129) introduced me to Justin. Justin is a former Drury University player and coached his team to win the GRBL championship last year. He now works as a graphic artist at Prixel Creative.

I think the reason I like art so much is because I can’t create art. I make decent stick figures and awful nonsensical doodles while I’m on the phone. On the day Dustin introduced us, I marveled at several of Justin’s creations as we visited over a game of ping pong.

Justin joined me in right-center field for catch during two more batting practice rotations. A fan of both Missouri teams, he too thought the turf was hot — it literally melted the soles of his shoes. His best day on the field came his junior year at Drury when he entered the game as a relief pitcher with two on and no outs and struck out the side to win the conference championship.

“That dogpile was incredible.”

He told me the story of his 7-inning relief effort as we toyed around with a variety of pitches, occasionally stopping to snag a fly ball or grounder hit our direction. Two-seams and sliders, knuckleballs and curves. Justin even threw a couple of great screwballs. I decided not to test my elbow.

“Baseball taught me to be okay with failure. Failing doesn’t make me a failure.”

In the world of creativity and entrepreneurship, this lesson is so important. There’s still a part of me that wonders if I’ll make it to the end of the year playing catch every day. If I do fail at Catch 365, I’m still incredibly grateful for all the people I’ve met along the way. Failing simply means you had the courage to try.

“Baseball also taught me the importance of being consistent in practice. Part of being creative is showing up every single day ready to work. Put in the time, do the hard work.”

This is exactly what I say to people who ask me about writing. Write every day, period. Pick a time and a place and don’t get up until you’ve written at least two pages.

For several weeks, I considered trying out for the league. The rush of adrenaline that only comes with competition. Seeing if I can hit a fastball and lay off the slider low and away. Running in on a line drive and sliding to catch it just before it hits the turf. I’m not afraid of trying out and not making a team; that’s already happened in my life.

For this season in my life, however, investing my energy in the creatives who live under my roof is a higher priority. With school starting, weekends will be a sacred time for family and for rest. And probably for homework.

Besides, there’s always next year, right?